No one expected to see a neon orange Oklahoma State singlet cruising with the leaders at the NCAA Division I Cross Country Championships in Wisconsin on November 29.

But there he was, Isai Rodriguez, an unheralded redshirt freshman, kicking to a fourth-place overall finish against the best distance runners in the country.

Rodriguez hails from Ringwood, Oklahoma, where he won eight state titles in track and cross country and was the Gatorade Player of the Year in cross country in 2016 for Ringwood High School. But he dealt with more than his fair share of injuries.

After a year in Stillwater with Oklahoma State as a freshman, Rodriguez and Cowboys head coach Dave Smith may have figured out the magic recipe of miles to keep this young talent healthy and poised for more success.

Were you surprised by your performance at NCAA XC?

I mean, I knew I had the capability to be up there with the [top] guys but I was kind of surprised to stay up there that close and having a chance to win it. I believed in myself and I knew I had a chance to be top five, that was my goal.

Can you describe the race from your point of view?

I was kind of in the top pack but behind the top pack. I remember taking it out [at the beginning] and all I could see was [Wisconsin's] Morgan McDonald by me. I knew he was the favorite, so I was like, 'if I stay by this guy, I'll be good.' And he ended up winning it. It was a fun experience.

With a [kilometer] to go, I was wondering if I had another lap to go. I wasn't sure, I asked my teammate before the race, 'is there four or five laps?' and he was like, 'I don't know, just run, just run.'

So I was wondering, 'is there another loop?,' and once we came around to the finish line, I was like, 'oh, that's it'.

The finish was a dead sprint between Morgan and Grant and Edwin with you right behind. What was going through your head?

Those guys, with like 400m, 200m to go, they started separating. I still didn't know how far in I was but once we turned in to the finish line, I was like, 'this is it.'

That feeling is like... I've never been in a race like that, that loud, that crazy, it was spectacular. Everyone was screaming. 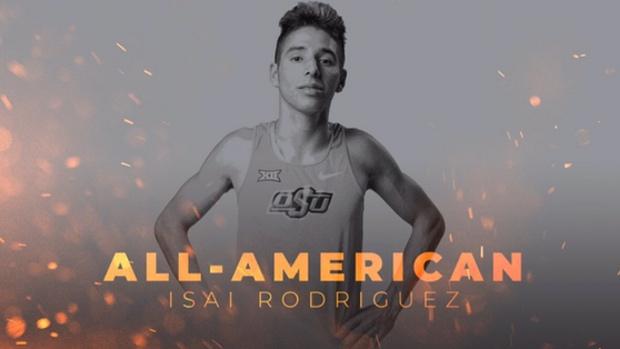 What did Coach Dave Smith say to you after the race?

He was excited. He was a little surprised. He thought I would be top 15. I was like, 'if I'm in any race, I want to win it.' My goal was at least top five and have a chance at winning it.

Why did you redshirt last year?

I had a lot of injuries when I was in high school because of my training. Coming in, I was already injured and then I got more injuries.

He took me to Big 12s and was like, 'we might race you, but if not, we will redshirt you.' So that's when I knew [I was redshirting].

"So I was wondering, 'is there another loop?,' and once we came around to the finish line, I was like, 'oh, that's it'."

How did it feel to travel to a meet and not race?

I always like racing, it's a passion of mine. Going to a race and just... I want to race, but if I don't, I understand coach probably knows for the best.

What kind of injuries did you have?

In high school, I didn't run my track season because I got a fracture in my hip beginning of senior year, and then that took forever to heal-like six to eight months. I tried to come back and would have shin problems and tried to run through it. I got a stress reaction in my shin and had to take some time off again. I took time off and my IT flared up and that was more through indoor, too.

I had that pain for a long time.

How much mileage did you run in high school?

Not a lot-five miles, four miles. Some days, I wouldn't run because my coach would say, 'just go run,' probably 20 to 30 miles a week.

How much do you run now?

Right now, he's really conservative with me because he knows I've had a lot of injuries so honestly, probably between 60 and 70 miles a week. A lot less than other guys, they do 80, 90, 100.

How long have you been healthy this year?

I've pretty much been healthy since outdoor. There is pain here and there but I'm able to manage it more, I'm able to get on top of my pains and aches. Being injured a lot makes ypu realize you should be more conservative and take care of your body, know your body and understand how to treat it.

What was your hardest workout your freshman year at Oklahoma State?

They're all pretty tough. When I first came in, the 1K repeats on the cross country course we had here, we did like nine... I don't remember what pace, but I think we had, like, three sets of three.

How did you adjust to the workload your freshman year?

At first, I was like, 'these guys run a lot of miles, it's something I'm not used to, I'm not scared of it, I'm ready to do it.' My mind was like, 'you can do this,' but my body was like, 'you need a break.' And that's how I got other injuries and stuff. Trying to play catch-up with these other guys.

Coach Smith and my trainer... I've gotten in trouble with miscommunication about pain.

What kind of training did you do this summer?

This summer was the first summer I actually trained. Other past summers I never trained, didn't know how to train, didn't have a plan. I was able to be consistent. [Mileage was] 70-75 in the summer.

I was at home for a month [in] Ringwood and then I went to Ruidoso, New Mexico to train. It was a little cold but it was nice because it was summer. Back home it would have been 100 degrees; [in Ruidoso], it was 60 to 70. The training and scenery was really nice. There were eight guys, we were all in this rented house and we had to survive, somehow, but we did it.

Wake up, maybe eat a banana, stretch out, get ready to go run, run, come back, do a little bit of core, grab something to eat, take a nap, wake up, maybe go to cross train or some people would double. I would come back and eat dinner and do it over again.

Honestly, yeah, there were times you get bored but the FIFA World Cup was going on this summer so we were watching that a lot.

"At first, I was like, 'these guys run a lot of miles, it's something I'm not used to, I'm not scared of it, I'm ready to do it.' My mind was like, 'you can do this,' but my body was like, 'you need a break.' And that's how I got other injuries and stuff. Trying to play catch-up with these other guys."

Why did you decide to come to Oklahoma State?

I was on an AAU track team in Tulsa and one of my former teammates went to OSU and he was like, 'you should come here.' My brothers both go to school here and it's not too far from home. The coach was really nice, the people, the team, was a good atmosphere. It felt like a good place to get better and achieve my dreams.

What sports did you play growing up?

My passion was basketball. I love basketball. I also played football in high school and grade school. I went to a small school so you could play every sport. Once I started growing up, it mainly became basketball. I had to give up football because my coaches didn't want me to get hurt for cross country and track.

Basketball was something I always loved and my friends played. [I thought] I'll probably stop after my senior year, so why not?

When did you start running?

I was in junior high and grade school doing track but I would just do the events my friends were doing, I didn't take it seriously. We would hang out with friends and skip school. If my coach would put me in the two mile, I would skip it or ask if he could put me in the 400m or 800m, or shot put or long jump. I would try to avoid running.

High school is really when I started thinking, 'okay, I'm good at this, I can go somewhere with this."

What advice would you give your freshman year self?

I would say trust the process. And to stay patient. When I came in, I was like, 'I want to race, I want to get a lot better,' and overworked myself.

My goals for the rest of this year, I want to win the 3K at nationals in indoor and outdoor 5K.

Are you thinking about cross country next year?

It's creeped up on me. Especially, okay, I got fourth, for sure my goal is definitely to win it next year and I'm pretty sure that will be everyone else's goal who is in the top 15, top 10.

Why should potential recruits come to Oklahoma State?

I feel like Stillwater, there's not too many distractions here. You can really focus on running and education, which helps a lot. The team atmosphere is really like family, it's a really good place to be around, the coaches and everyone. Coach Dave Smith is a really good coach, he's been doing this a long time and he's had a lot of success and I trust him. 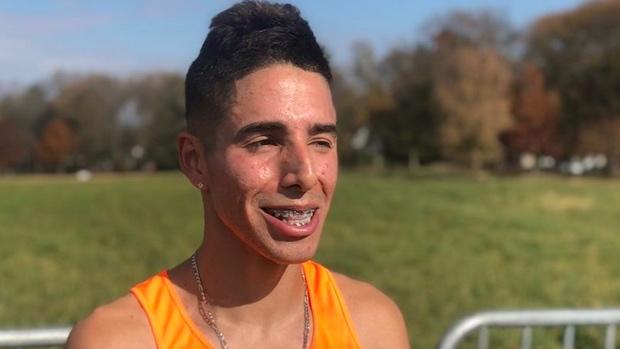