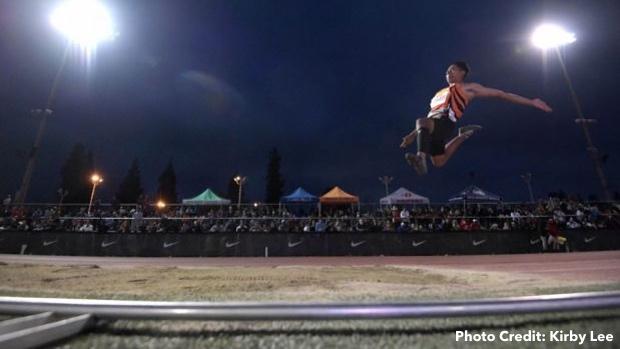 In high school and collegiate track meets, triple jumpers are given choices for take-off boards.

In NCAA meets, there are usually two boards to choose from. High school usually gets three. This is because there is a wide variety of skill level amongst the jumpers entered in competitions.

But how should the jumper decide on which board distance to use?

The key is for the jumper and coach to determine the range level of the athlete at the current time in their development. This is done commonly in other sports, where a basketball coach will insist his or her players not shoot from distances outside their current shooting range until they become a stronger shooter. Same with field goal kickers in football, or with golfers, or any other sport where developing athletes may not be ready yet to perform skills at the extreme limits.

In consideration of a young man who can triple jump 44 feet, it is a mistake to insist that he should use a 40 foot take-off board if a 32-foot or 34-foot board is available as a second choice.

First, if 44-feet is his personal best, he may average jumps that are in the 42-foot range. This would mean on an average jump he would only clear the end of the runway by a couple of feet if he uses the 40-foot take-off board.

On a personal record attempt, he may go into the pit by just 4- or 5-feet. On a really bad jump, he many not even make the pit and fail to get a mark. By contrast, in examining the best male jumpers in the world--who tend to jump between 56 to 59 feet--they use a 42- or 43-foot board. So they end up flying 12-15 feet into the pit on their final phase. These athletes COULD use a 50 or 54 foot takeoff board, yet there is no such demand on 50-foot plus boards. It would cut it too close.

Likewise, the best women in the world who jump 46- to 50-feet usually are using a 36-foot take-off board, and like the men they are flying over, 12 feet into the pit in most cases. They don't use boards that are 42-feet, even though their personal records are 4- to 6-feet farther than that.

In the case of both the men and the women at world class levels, the triple jumpers sometimes land within as close as 3 feet of the end of the runway on their last take-off before the pit. So, the developing jumper in high school and college would be wise to do the same.

As a general rule, around 20 to 25 percent of a jumper's personal record should go into the sand pit--just like world class triple jumpers do. So the triple jumper should select a board that would roughly estimate that given where their range of development currently exists.

In taking our 44-foot jumper again as an example, should he use a 32-foot board; if he ties his PR, he will likely land his step phase around 4- to 5-feet from the end of the runway. He will then travel 12 feet deep in the sand pit at the finish. On a new PR, he'd go perhaps 13 to 15 feet into the pit. On a bad attempt, he would still go 6 to 8 feet into the pit, land safely, and get a mark.

Given these considerations, a reliable rule to remember is: Athletes should not pick a board distance that only allows them to get into the pit by merely a few feet

* The above recommendations are estimates, however selecting boards which are plus or minus 2 feet in either direction will usually work when the options are limited.

* During training sessions the same principles apply for short approach jumps. The athlete should be approximately 6' from the end of the runway on the step landing, so take-off board selection in training will be from a closer board than full-approach competition jumps.