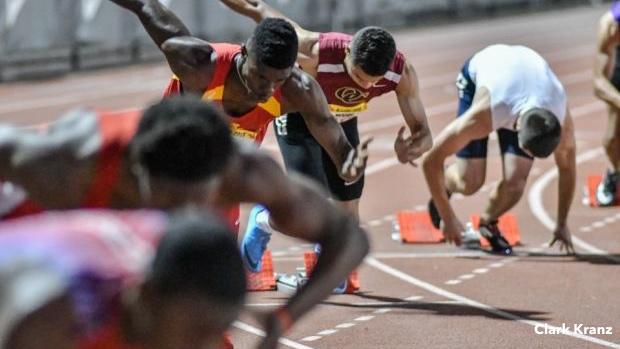 Time is one of the most important facets of a training program when developing speed for events such as the sprints, hurdles and jumps. Understanding how time contributes to speed development is a key factor for athletes and coaches.

First, speed must be defined. In this case, speed is the maximum miles per hour (or meters per second) an athlete can generate once they accelerate to top velocity. From that point, running at or around top end speed may only last for one segment of 10 meters before a slight deceleration starts to set in.

There are three time factors involved in training for speed. They are:

SECONDS - HOW FAST IS THE ATHLETE RUNNING?

In order to stimulate speed growth, an athlete must run at a high enough intensity. Intensity is a catalyst for developing the power output necessary to break through speed ceilings.

Many successful coaches prescribe running at least 92-percent of maximum intensity for speed development. Others say 95-percent, or higher. Either way, the general rule is the effort must be high. Sprinting at speeds below 90-percent intensity won't cut it because it lacks specificity.

Speed being a result of distance over time, the times of any distance covered (40m, 60m, 80m etc.) must be in the range of near maximum efforts, and the times must not deteriorate or else the athlete is simply running junk meters. It's better to limit the volume and stay with quality.

MINUTES - HOW MUCH RECOVERY TIME BETWEEN SPRINTS?

The farther an athlete sprints at high intensity during training, the more minutes of recovery they need before doing another sprint. This means having patience. Performing three runs at near maximum speed could mean taking anywhere from 10 to 15 minutes between each of the 3 runs. Yes, the runner may be able to get through 3 x 60 metres in a few minutes, but the second and third repetition will be a deteriorated effort, and not yield the intended result. Short recoveries between sprints has its uses, but for other themes such as speed endurance, tempo, or starts, it's important to use recovery. Short recoveries, however, are not recommended where the theme is training is one's max velocity.

Plyometric jumps and weight lifting are also speed session activities which can supplement speed, and are best done after sprint work out on the track so that the athlete is freshest when they begin sprint practice.

HOURS AND DAYS - HOW MUCH TIME BETWEEN SPEED SESSIONS?

The ability to recover from speed-training sessions varies among individuals. However, no one should ever routinely train for speed two days in a row. Twenty-four hours is simply not enough time for the body to recover.

Recovery days are where the quality of the body improves-supercompensates after the stimulus of a speed session. If another intense session is introduced too soon after the first one of the week, the athlete will be over-trained and regress. Some athletes only need 48 hours recovery, so they can sprint hard three days per week--i.e. Monday, Wednesday and Friday. Others may need 72 to 96 hours recovery--i.e. Monday and Thursday, or even Monday and Friday. The athlete and coach must be observant that speed sessions aren't crammed together in a training cycle. (Note: A meet day is also considered a speed day.)

As famed track coach Bill Bowerman of The University of Oregon once prescribed, athletes should train a hard day followed by an easy day--the hard/easy system. So in between speed days the athlete still trains, but the intensity of work must be kept much lower. Staying on grass and keeping speeds below 75 percent is one way to facilitate recovery, general fitness and the ability to recover better from higher intensity training sessions.