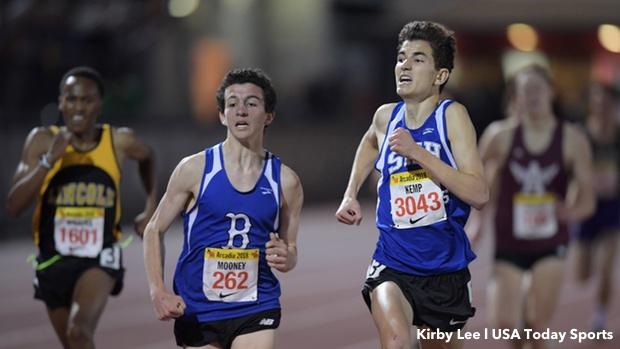 The race was as competitive as we expected it to be.

And over the course of eight laps, we saw some major moves that changed the position of where it went from moment to moment.

In the end, it was a race to the finish between Canadian Marcus Kemp of Stockton St. Mary's and Broomfield (CO) High's Michael Mooney, with Kemp taking the overall title in 8:50.95.

Roughly two laps in, Mwaura began to push the parameters of those in the field, pushing the pace as the contingent ran to a conservative start. He was in lead through 1600m, going through in approximately 4:28.

By then, however, things started to get interesting. Lyons Township (IL) High's Danny Kilrea started to make his move toward the front, and then it was Arlington (MA) High's Ryan Oosting and with 800 meters to go, most of the field just tried to keep up.

With 450 meters to go, Homestead (WI) High's Drew Bosley, who had opened his season with a few smaller meets in Wisconsin before heading to this primetime meet in California, had made up an incredible amount of space and had finally made his big move, taking the lead with 400 meters to go.

But as he stretched out so did the field, and the kicks started coming. Kemp and Mooney were in position the entire way, and making the last turn, it was all daylight for the both of them as they raced home.

Kemp leaned Mooney at the line in a photo finish.