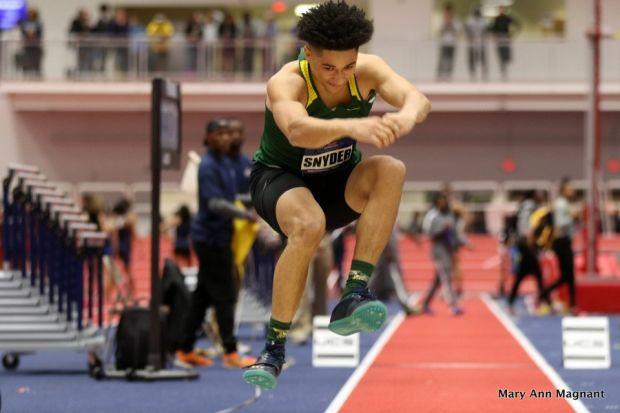 Which is a better method: the single- or double-arm drive in the triple jump?

This is a common question asked by many coaches and athletes when learning to triple jump. The answer comes down to what is most effective for each individual. People have jumped very far using different styles, so there is no universal method.

THE FIRST PHASE: ARM DRIVE THROUGH THE BOARD

Going into the first phase (the hop), most of the world's best jumpers use a single-arm running motion as they pass over the takeoff board, much like a sprinter. A single-arm motion is conducive for conserving speed.

By contrast, when setting up a double-arm action there is a tendency to gather the arms during the last few steps of the approach -- disturbing the running motion. Instead of attacking the board, many jumpers coast into it as they gather.

Since it is a rare jumper who can sprint through a double-arm preparation without slowing down, the single-arm style seems the best way to go for most jumpers.

Some key fundamentals of single-arm mechanics:

Some key fundamentals of double-arm mechanics:

Arm skills need to be rehearsed in training so that they are automatic under the stress of competition. In deciding on either single or double arms, the style selected should be the one with which a particular athlete naturally feels the best leverage and timing. Sometimes an athlete cannot generate lift forces using one style, but the same athlete will generate much greater forces using the other. The best way to figure out what works for each jumper is to experiment in training. Through experimentation it will become clear which style innately works better for each individual.

The following are different arm-drive sequences utilized by some of the world's best, along with video examples of each type for observation purposes.

Robert Marchetti, a former NCAA Division I track coach at Rider University and Columbia University, is a private track and field coach located in Hamilton, New Jersey. For more information, you can email him at robertmarchetti221@hotmail.com. You can visit his website at www.coachup.com/coaches/robertm-4.