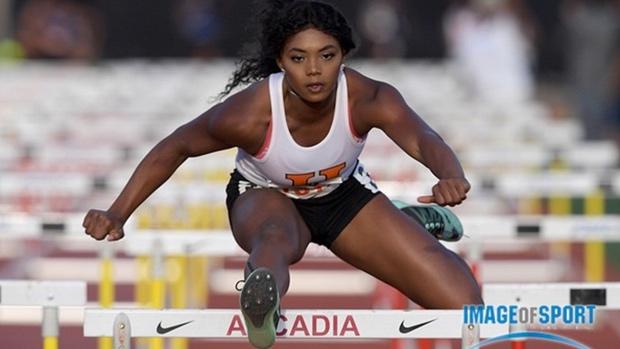 There are two Texas athletes who know each other well in this race. That's Javlyn Cameron and G'Auna Edwards. The pair have run against each other several times this season and both are nationally ranked in the 100m hurdles. Edwards holds the US. No 12 time with an 13.58 effort while Cameron holds the US No. 10 time with a 13.54. Both were wind legal performances. Cameron finished fifth in the Brooks PR field a year ago, running 13.96.

The biggest contender in the field will be Californian Kaylah Robinson, who holds the US No. 4 time of 13.32. Robinson finished seventh last year at Brooks PR and will look to come back strong this year as a senior. She should be considered one of the favorites. But let's not forget Hoover High's Caitlyn Little, who holds the fastest time in the field with her wind-legal 13.29 from the Arcadia Invitational. This field is loaded with some of the nation's best and will be a great one to watch. Nevada's Talie Bonds, who won the heptathlon at the Great Southwest Classic, will be another athlete to watch.

Little, the star hurdler from Alabama, is a solid pick to win here.