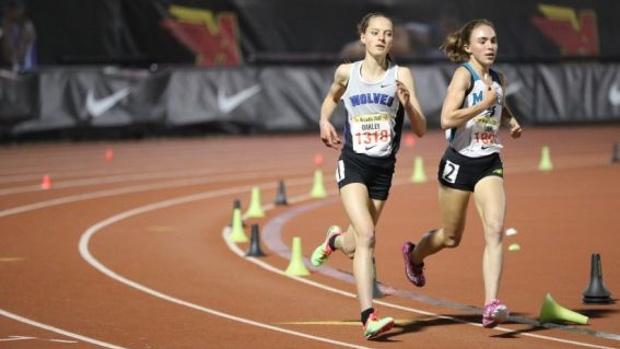 We could be in for a show between two powerhouse runners. And coincidentally enough, they've already gone head-to-head earlier this year at the Arcadia Invitational. So make sure to watch Aurora Grandview (CO) graduate Brie Oakley, a University of California Berkeley signee, going at it against Malibu (Ca.) sophomore stud Claudia Lane. Oakley has the faster indoor PR in the 3200 (9:53.04), but the Colorado distance talent and Gatorade National Cross Country Runner of the Year was nipped at the line by Lane in April in 9:57.52. The Brooks PR record in this race stands at 9:53.54, but don't be surprised if it's broken.

Rebecca Story, of the Christian Academy of Knoxville, and Jackie Gaughan, of Exeter High in New Hampshire, likely have the two best shots of being surprise picks here. Story has gone sub-10 for the 3200m, while Gaughan is just five seconds short of accomplishing that mark at the distance. For the full two miles, anything can happen, so don't count out Fort Collins (Co.) High's Lauren Gregory or McKinney (Tx.) High freshman London Culbreath, who has remarkable foot speed late in races. Illinois' Katelynne Hart, who took Illinois by storm as a freshman, is also in the mix. Maryland's Hayley Jackson, who just committed to West Virginia, could make a case as well.

With great turnover in the last 400m, Lane has the type of finishing speed that often wins big races.