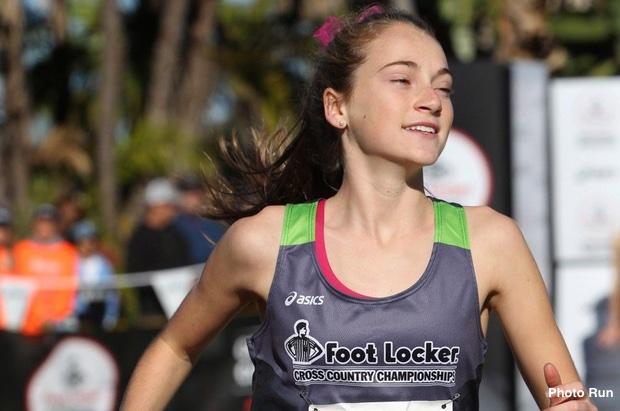 Libby Davidson will be in North Carolina this Saturday for the Foot Locker South Regional. She's a two-time Foot Locker Nationals qualifier and one of the top returners to San Diego but this year, she won't be racing.

The E.C. Glass senior, who will run for the University of Virginia next year, placed just fourth at the Virginia 4A state meet two weeks ago. The placement was unexpected and her time, 18:25, is over a minute slower than her state meet record of 17:12 [broken this year by Kate Murphy in 17:08].

Davidson was supposed to win state this year - and maybe nationals. She won the Virginia 4A state cross country title as a freshman and sophomore but had to settle for runner-up honors last year behind eventual Foot Locker champion Weini Kelati. This was also supposed to be the E.C. Glass senior's year to go for the Foot Locker title herself after recording sixth place finishes in 2015 and 2014.

So when Davidson developed some nagging tendonitis in her hips, she was faced with a conundrum: shut down the season completely? Rest through the VHSL regional and state championships to be ready for nationals? Or, run through the pain and go for broke?

Because 2016 is also the year that her team was supposed to win their first state cross country title.

Van Porter, the E.C. Glass head coach, said that he never knew the extent of her discomfort.

"I may have shut her down for the state meet [if I had known]," he said. "But she was not to be denied. E.C. Glass had never won a state cross country championship and that was one of the few things she hadn't checked off her list. She would have crawled across the finish line and she probably would have still broken 19 minutes."

Davidson confirmed via phone last week that her season ended at the state meet. Her doctor gave her tentative approval to run, but she prefers to look ahead to the indoor season and not risk exacerbating the injury.

It's a tough break for one of the most consistent distance runners in the nation.

But she never reconsidered her decision.

"I would never sit out," she said. "I would do whatever I need to do for my team. If me not running meant them not winning, there's no way I wouldn't run. I was ready before that state meet. I was like, 'it's gonna be my day,' and even though it wasn't, to be able to hold that trophy with those girls was the best feeling."

In Davidson's freshman year and sophomore years, she won the individual state title while the team placed second. Last fall, Davidson was runner-up to Kelati and the team placed third.

This fall is Porter's first as head coach of the cross country program, though he has coached in an assistant role for the past five years.

"We knocked on the door of a state title the past three years but we could never get through it," he said. "Our team is mostly mid-distance runners and they do not like running that 5K."

E.C. Glass has seen great success from the middle distance crew. The 4x800m relay placed third at New Balance Nationals Indoor in 9:02.96, and No. 5 cross country runner Maddie Rennyson led a 1-2 sweep in the 800m at the outdoor state meet.

"It seemed like they were injured and tired by the end," Porter said of past cross country seasons. "This year when we came into the state meet, we were completely fresh and it paid off."

All five scorers placed in the top 16 to outpace Loudoun Valley High, 36 to 88 points, and everyone except Davidson set a lifetime best for 5K, including Libby's little sister, freshman Jette, who actually led the beginning of the race.

"I couldn't catch up with her, I was so scared!" Libby said. "The funny thing is, someone tripped her at the mile and she went down flat on her face and she got back up and still broke 19!"

Jette earned all-state honors with an eighth place finish. Her final time of 18:56 was a 30-second PR.

The state meet was a challenging parenting moment for Sarah Davidson, Libby and Jette's mother.

"It was the best of times, it was the worst of times," she said. "As a mother, it was so hard because there's Jette who has just broken 19 and I want to go say, 'good job, baby,' but I'm carrying Libby out of the corral and Jette looks at me and says, 'I just wish Libby was happy.'

"I was watching Libby do her warm-ups at state and she's limping. Then I have to turn around and be all peppy, go-go-go! Life's not always fair. It's hard not to feel like you've been punched in the gut as a parent. My friends are like, 'how's Libby?' And I said, 'better than me.' I shed more tears than her."

'Peppy' and 'go-go-go' is actually a pretty accurate way to describe Libby's final minutes of the race. She had long since dropped back from eventual state champion Noel Palmer and her own E.C. Glass teammate Brooke Manion snuck up next to her.

Manion placed third and Davidson was fourth; both girls are seniors.

State freaking Champions with my best friends. I love you all so much. This was a season for the books.  #ECG pic.twitter.com/LqFiZYr8K7

Jette and a few other varsity runners from the E.C. Glass state titlist squad will make the trip to McAlpine Park for the Foot Locker South Regionals on Saturday.

Libby wasn't sure if she'd be up for the trip, but last week she said she wanted to go. She'll be part of a panel on Friday night featuring several top returning athletes.

Without the pressure of having to compete herself, Libby offered her own predictions for nationals: she says fellow Virginian Kate Murphy will win NXN and North Carolina state champion Nevada Mareno will win Foot Locker.

Earlier this fall, Libby and Jette accompanied Sarah to Hawaii as their mom qualified and competed at the Ironman World Championships in Kona.

When asked how her athletic accomplishments have influenced her children, Sarah thought for a moment, then said, "Everyone around you has set a goal and put in a lot of hours to meet that goal. The kids see that and they see people cross the finish line with elation in their eyes.