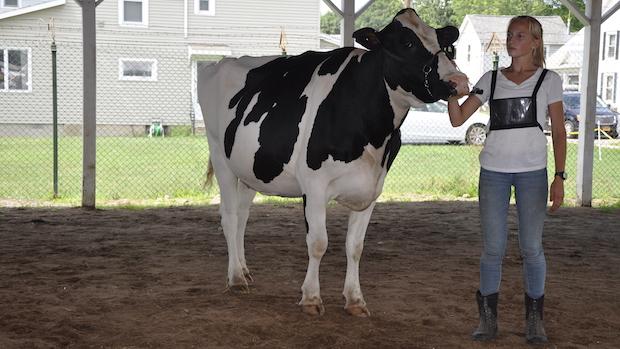 Another week at 40 miles! I was pretty busy this week as it was the first week of preseason and I also took my cows Mara, Allegra and Cece to a cow show that was Monday through Sunday. Because of the show I wasn't able to fit in PT or strength training which was too bad but I plan to catch back up next week.

(8/15) I got in 6.5 miles, today was the first day of XC pre-season which was exciting. We did an easy 10 minutes on the track, some speed D just to show the newer members and then went for a longer run around Corning. It was fun to run with all of my teammates again!

(8/16) Easy 6 miler with the girls team. We did it at a pretty easy pace since today is a double run day, everyone else went 5 miles but since I might not make tonight's practice I went for an extra mile. Later that day I did 4 very easy miles, I wasn't able to make it to night practice because I was at the show, but some of my fellow cow-showing friends also run cross country so I ran with them around the town which was fun...total mileage for today was 10.

(8/18) Today was a threshold workout day. Potential thunderstorms kept us from doing the workout on the grass so we did them on the track, I warmed up then did a 17:45 3 mile threshold took 3 minutes break then did a mile at 5:51 and cooled down. I didn't feel particularly great and I wished they had been a little bit faster but that's ok. After the workout my team did a stretching and core circuit inside.

(8/19) Today was a double practice day so in the morning Kate and I ran 6 miles towards Sunset, an area that is very hilly and explored some trails at the end of Sunset Drive. In the evening we did another easy run for 5 miles around Corning.

(8/20) Lawson's Lame games day 1! The team ran to an area near the school called Dennison Park and there my dad/coach put together the first Lawson Lame game, transferring water from a water cooler to a milk jug about 200m away, you can only use dixie cups for the first 50m and then you have to transfer that water into bigger cups or a freezer bag and then transport and pour the water into the milk jug at the end. Whoever has the most water in the jugs by 10 minutes wins. Seniors won bronze which was a box of saltine crackers :) The run to, from and running during the games added up to about 5 miles.