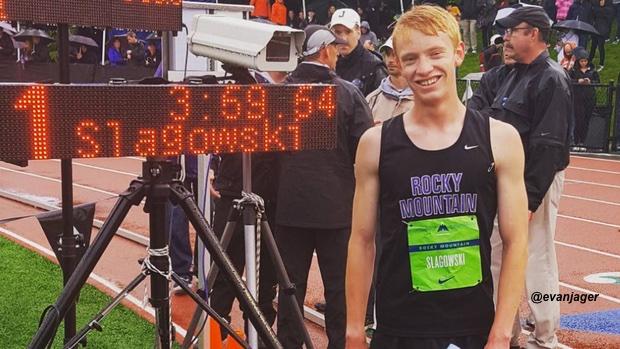 Meet the newest member of the high school sub-four club, Michael Slagowski of Rocky Mountain High School in Idaho. Before his 3:59.53, the New Balance Nationals Indoor 800m champion set the track world ablaze with solo runs of 1:48.70 for 800m and 4:05.71 for the mile. Jojo spoke to Slagowski and his coach, Bob Hays, about the historic moment and what comes next.

Jojo: Congratulations on the sub-four! Can you describe that night at the Nike Jesuit Twilight meet in Portland?

The atmosphere was really cool, there were a lot of people on the infield cheering. The announcer was telling the crowd I was going after it. At the end, I was pretty sure I broke it. The clock said 3:59 and it paused on the 3:59. I was just really happy and then I heard the confirmation.

Did your teammate feel bad about slowing down in the second lap?

He didn't really feel that bad about it since I still broke four. He was happy to be a part of it.

Was there an announcement at your high school?

On Monday, there was an announcement at school and they had me run down to the office. All the classrooms went out to give me a high five as I was running down the hallway. I was expecting an announcement or something, but not all that. There's about 2,000 kids in the school. I just ran by the classrooms that were on my way to the office, but I had to run across the whole school.

When did the prospect of sub-four become a realistic goal for you? 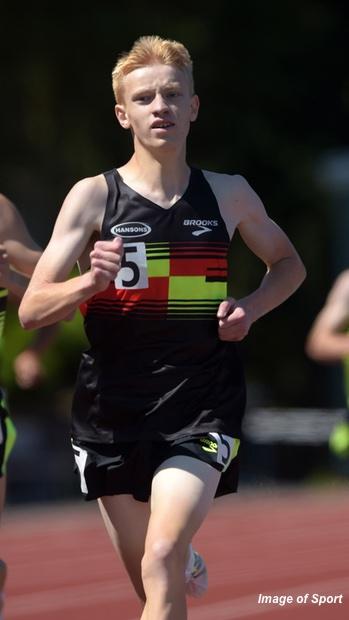 It wasn't really my plan until I ran 1:48 and then the 4:05 at small meets by myself. Both of those meets gave me confidence to go for sub-four.

Who wins in a race: Michael Slagowski or Drew Hunter?

I think it would be really interesting because we have different styles of running the mile. He's more aerobic-based and I have a little more leg speed from 400m, 800m. I think if there was a rabbit, it would be a really close race. And if there wasn't a rabbit, he would take it out really fast.

I think the 3:53 would be harder because I think that's such a fast time for a mile, no one has even come that close to it in high school. I think that would be tougher but both would be extremely difficult.

What are your goals moving forward?

After state, I will run the Pre Classic High School Mile and Brooks PR. There might be a meet in between that. Maybe Juniors.

I want to run another fast 800 for sure. But I also want to race Drew Hunter in the mile, so if he goes to Brooks PR in the mile, I would probably want to do that because I'm not sure I'll get another chance.

[Breaking Alan Webb's record] would be awesome but I'd have to get into a really good pro race to do that. Right now, that's not really on my mind.

Do you think your sub-four surprised people?

I think I've definitely surprised some people. I think that a lot of people saw a 4:05 and just thought that I wouldn't be able to drop a few more seconds or maybe that I'd have a shot at the end of the year. I had a few hard workouts before I ran the 4:05 and I wasn't pacing for it and it was completely solo.

Do you think more and more high schoolers will break four every year?

I think that there's even a chance this year of there being more sub-fours. There's a good class behind us, too. It's becoming more regular for high schoolers to break four because of people seeing other people doing it and realizing that it's not necessarily impossible.

Who's your pick for the next high school sub-four miler?

How would you describe your diet?

I eat a lot of the same food each day, pretty healthy. I eat a lot of food. I also eat some junk food. For breakfast, I'll have cereal, a banana, English muffin, some V8 juice. Lunch, a sandwich, some strawberries, spinach, almonds, yogurt. For a snack, I'll have pretzels or a granola bar. After practice, I'll eat a Clif bar. Dinner is always something different. Usually something with a lot of protein.

Tonight, it was pizza.

I'd say milkshakes and pizza.

Did you eat that after your sub-four?

No, I didn't get a chance but I would have liked to. 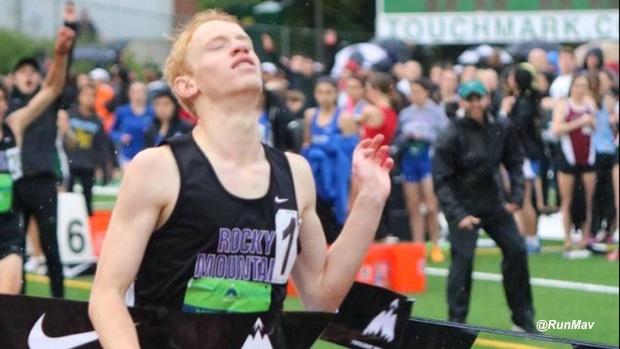 Jojo also talked to Bob Hays, who has coached Slagowski at Rocky Mountain High School since Michael's freshman year. Hays started coaching at Rocky Mountain in 2011 as an assistant volunteer and was hired on in 2012.

Bob: Shy, quiet. We had a really good cross country team when he was a freshman so he took a lot of razzing from the senior boys. Not mean, just trying to get him to talk and speak up a bit. They'd go, 'Hey Michael, how's it going today, are you ready to run with us?' and then as the season went on and he became part of the varsity team, 'hey Michael, are you gonna keep up with us today?' I think by the end of the season, he was our sixth man.

He was really talented when he was young. He had to pay his dues, so to speak.

He's just so humble and quiet. And he's still that way.

He didn't really understand how good he was as a freshman. It became clearer as we got through cross country and he ran 16:35 to break the school freshman 5K record and then in track, he broke the freshman mile record, 4:30.

Can you describe watching him win New Balance Nationals Indoor in the 800m this March?

It was a lot of fun. It was incredible. When they collapsed down on him the final 400m, I was a little nervous but once he got out of that mess into third and then second, I had no doubt he would win and it was very exciting.

What was the moment when you realized that sub-four was a possibility?

Last year, he ran the Jesuit Invite and won that in 4:09. After that, we went to state and then we decided to do an 800m time trial prior to Brooks PR. He had a friend run the first 400m with him and then ran a 1:50. When he ran that 1:50 in a time trial in June with no one there, I knew I had somebody very special.

This year when he ran the 1:48 800m solo, I knew for sure that he would break the four-minute mile.

Who talked about a sub-four mile first: you or Michael?

Neither of us really brought it up. Joking, maybe, a couple times about it but never really seriously until that 1:48. Then at Pasco, I wanted him to run 60s; he ran 4:05 with no competition. He led the race start to finish, and after he ran that, we talked about when we go to Nike Jesuit and that is when we're really gonna give it a shot.

I don't believe in talking to a kid about doing something so big until it's really realistic. If you can run 1:48 solo for 800m, then it becomes very real and you're not putting a whole lot of pressure on him because he understands he's fast enough. Before that, there was no reason to talk about it. 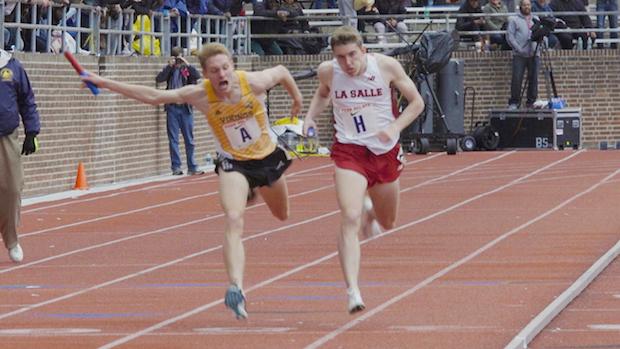 Who wins in a race: Michael Slagowski or Drew Hunter?

That's all over the internet right now. My opinion is that Michael could beat Drew Hunter in a mile. He's got more leg speed and he's very untested right now. Drew has been in many, many pro races and has run a bit faster than Michael right now. A lot of people say that Drew has more experience and would grind it out. But Michael is very fit. He can run a 48-second 400m and he can close very well.

Looking at the national rankings, Drew ran 3:42.42 for 1500m and Michael ran 3:42.40 en route to running a full mile. So imagine if Michael had to run just 1500m. In a miler's race, true leg speed overcomes strength and endurance. If you took Michael up into Drew's premier races, which is the 3K, 5K, probably, I don't think Michael could race with him.

I'm not taking anything away from Drew, he's a fantastic miler, but he's just had more opportunity than Michael. I think he's just unknown.

I think they're equally tough. You're talking two huge records but probably the 1:46. You just have to have such fast turnover to be able to handle two laps at that speed and typically you can't get into 800m races that fast unless you're in a  pro race. You have to have enormous leg speed to do it with the lungs to back it up.

You have to just be in crazy shape to do it. 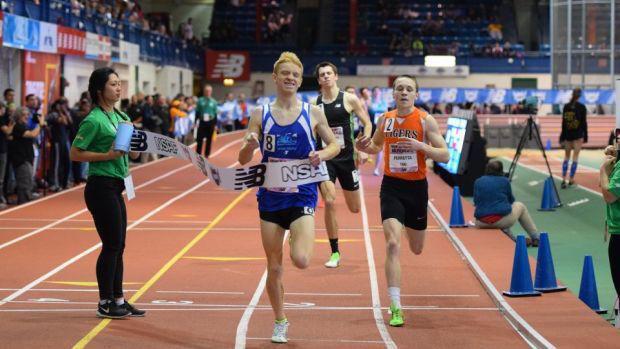 What does the rest of the racing schedule look like?

We have a small local meet called the Eagle Twilight, which is supposed to be windy or bad weather. Then our district meet and our state meet and then Brooks PR. We're looking into possibly, hopefully going to the Prefontaine Classic and then the Portland Track Fest.

The mile at Pre. Brooks PR, unsure--the 800m or mile. And at Portland Track Fest, the high-performance 1500m.

It's really surprising. I didn't think we'd get this much attention for it. I know it's a big deal but we really didn't expect it. Today I told Michael that we're done doing interviews. We need to get back to reality and start focusing on working out and preparing for races. I hate to do that but you have to start somewhere. He's had an interview every day since he's come back from Portland.

Watch Slagowski place third at the 2015 Brooks PR Invitational mile in the video below.