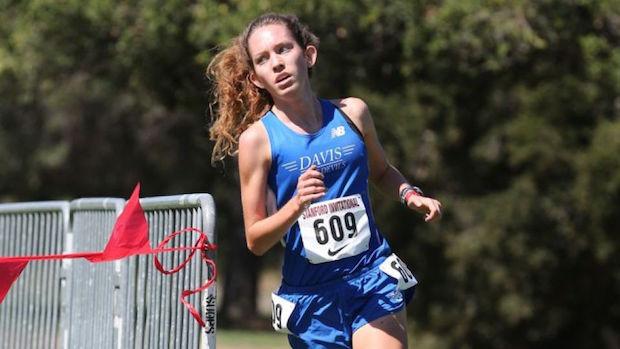 Bill Gregg made a simple error.

Upon further reflection, he said, well - maybe she couldn't.

"I said, 'you know, I'm sorry, but just run. If it happens, it happens but it will be a consequence of your race.' I let go of the idea because I thought it was too much to ask."


"But she went out and beat it anyway."


How impressive is that record? Not only has it lasted 19 years in one of the nation's most competitive states, but the legend of Julia Stamps carries the weight of four national track championships, eight California state titles, five world teams and too many national and state records to count within her prep reign. 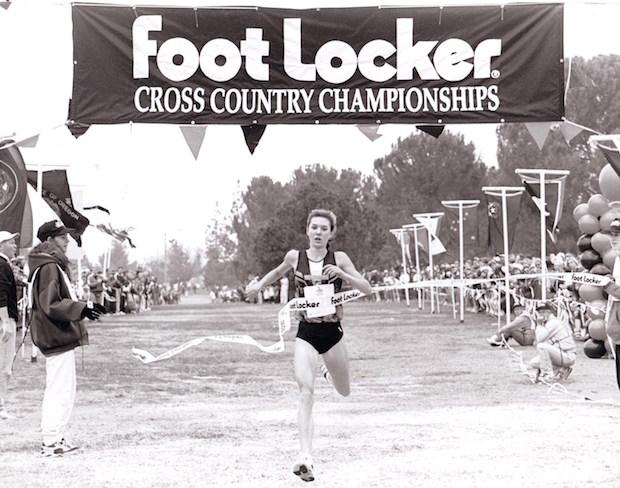 "I knew about [the record] but I just kind of wanted to have a good race and if it happened, it happened," O'Keeffe said. "I just ran based on feel."

The Blue Devils senior has now set two course records in as many weeks on some of the Golden State's most prestigious greenways. Last weekend, she set an all-time best of 16:32 at the Stanford XC Invitational. Her time is the fastest 5k mark in the nation this year. That and her overall record granted her the No. 1 spot atop the Saucony Flo50 Individual National Rankings this week.

O'Keeffe is one of the top returners to NXN, as she finished fourth at the championships in both 2013 and 2014. She is the No. 2 returner behind 2014 runner-up Paige Hofstad of New Braunfels, Texas, who is undefeated so far this fall but was injured in the spring. 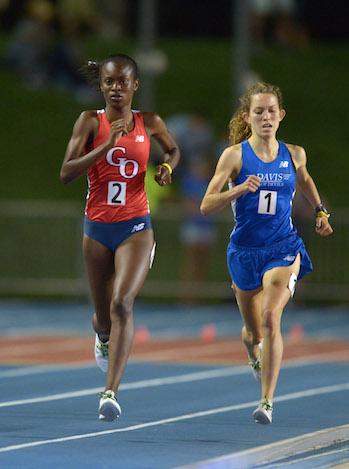 "I want to compete at a national meet at the end of the season," she said, "and stick my nose in there and do the best that I can and keep progressing."

But the title... does she believe she can win?

"Yeah," she admits, "definitely, that would be an awesome thing to be able to do."

There are comparisons between the soft-spoken O'Keeffe and the other hotshot California distance girl - Destiny Collins of No. 1 ranked Great Oak High School. O'Keeffe has twice defeated Collins for the D1 state cross country title, but it was Collins who ran away with the CIF State Finals 3200m this spring with a ferocious kick and 9:53 breakthrough performance. (pictured to the right).

O'Keeffe entered that race as the prohibitive favorite, given her solo 10:00.8 run the week prior and Collins' double duty in both the 3200m and 1600m finals. But the then-junior Collins was fired up after a disappointing third place finish in the 1600m finals after setting the pace through 1200m and made a move that O'Keeffe simply could not match. She finished runner-up in 10:01, just one second off her PR and eight seconds behind Collins.

"I feel lucky to have her in my state because every time we line up, I know it's gonna be a really tough race and we're both gonna give our best and see what happens," O'Keeffe said. "It was really cool getting to know her better with Brooks and the Nike Elite Camp. It's like, 'oh this is a friendly person,' we can be friends off the track and just give it our best once we're on the line."

O'Keeffe is somewhat reserved about her own accomplishments and goals, but lights up to praise her teammates who have helped raise Davis' profile to a No. 20 ranking.

"I think we might have a shot again [at NXN]. We went back in 2013 and I think we might be stronger than that team was," she said. "I think it was a little more fun with the team, especially because it was all of our first times there."

If she helped the team get there this fall, she would be able to share the experience with her younger sister, Olivia, a sophomore who runs as consistent No. 3 and recently set a 5k best of 18:00.4. 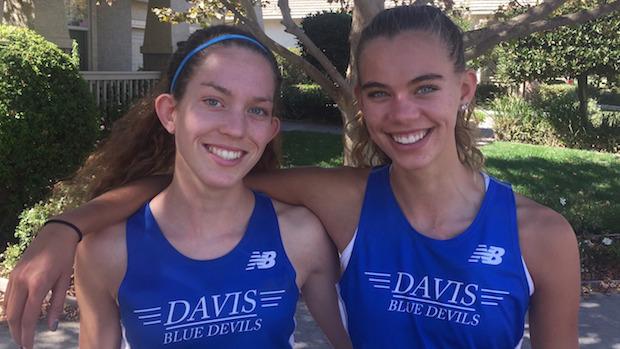 Sisters Fiona and Olivia O'Keeffe have led the Davis High School team to a Saucony Flo50 No. 20 ranking this season. (Photo courtesy of Fiona O'Keeffe)


The California qualification process to NXN is far from straightforward, however, as the results from all divisions of the state championship are merged and rescored to determine who gets a bid.

"I think it's really nice that we don't have to do a regional meet but it is a little crazy how our merge thing works because when you're not in the same race, conditions are different and different races go differently," O'Keeffe said. "So it's a little bit strange but it is nice not to have another race."


All O'Keeffe can worry about, then, is going for a three-peat at state - which will be hard enough as it is. 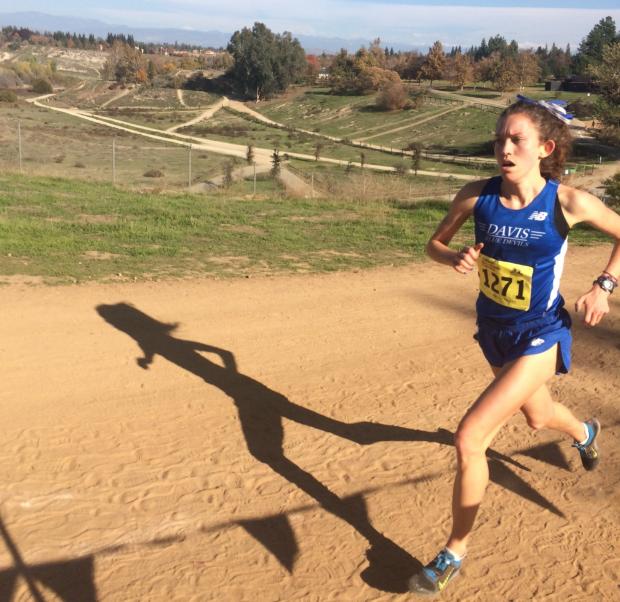 "It's definitely a goal [to win state for a third time]," O'Keeffe said. "It's gonna be really hard to try to win that race but I'm looking forward to it and I just remember seeing Sarah Baxter win and she is a huge inspiration."


Baxter, now a redshirt freshman at the University of Oregon, was a four-time California state cross country champion and two-time NXN champion. Just a few years ago, she was the one erasing course records all over the Golden State.

Can O'Keeffe challenge Baxter's 16:00 Mt. SAC record? Even Jordan Hasay, another four-time California state XC champion, "only" ran 16:27 there. Another Foot Locker champion and all-time great in Amber Trotter owns the second-fastest time in course history, per her 16:11 in 2001.

Before that is the ASICS Clovis Invitational next weekend. (This weekend, O'Keeffe is visiting Providence, after Stanford last weekend, with Oregon and Wisconsin on the horizon). 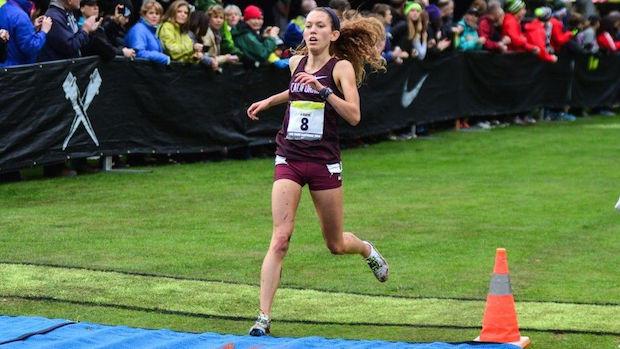 O'Keeffe took fourth at NXN in 2014, matching her finish from the 2013 championship. Is this fall the year she can win it all? (Photo by TrackTown Photo)

Chasing times is that last thing on Coach Gregg's mind.

Sure. But the numbers are out there.

Another number that could be on O'Keeffe's mind, if not Gregg's? 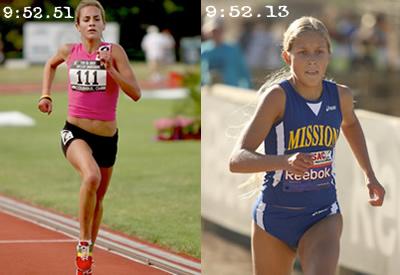 "She's come a real long way from her freshman year," Gregg says of O'Keeffe, who ran 5:12 and 10:40 as a frosh. "I think you could recognize the talent. It's just been a natural progression. I think these campaigns get to be pretty long and we're much more on top of, if she feels a little sore or something coming on, then we say, 'let's take a few breaths.'

"Part of it is natural progression and part of it, just understanding her body better and me being aware."

And the other part is the talent and desire that has already matched Fiona with the state's all-time best performers. Which, ultimately, places her squarely at the forefront of the nation's best.

If you can win a state title in California, a national title is usually not far out of reach. Just ask the girl whose record O'Keeffe just broke.