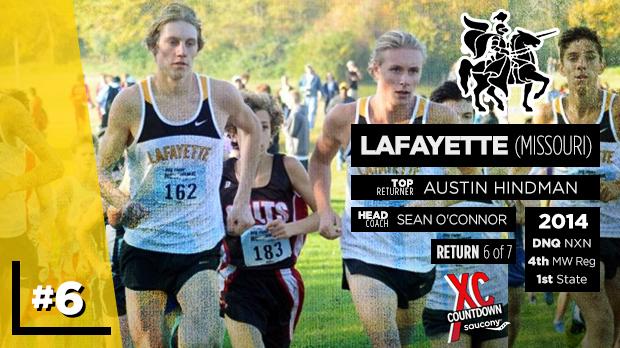 Lafayette has never been to NXN but lands in the sixth spot on the Saucony Flo50 Pre-Season Boys Teams Rankings, in large part due to the fact that the Lancers return their entire top five

The Lafayette boys are the least known team on our countdown and quite possibly the least known in the entire top 25 pre-season rankings. But... who cares? The Lancers certainly don't. The Missouri boys placed 4th at NXR-Midwest behind Sandburg (IL), Carmel (IN), and York (IL), but return six of their top seven from that regional team, with their entire top five returning.

Furthermore, that group of returners performed well on the oval this spring with three guys clocking sub 9:20 in the 3200m. In fact the Lancers placed 1-3 at the Missouri State Meet in the largest class running 9:11 for Austin Hindman, 9:15 for Devin Meyrer, and 9:19 for Alec Haines. Imagine what they could have done in a race with competition other than themselves.

Look for this seemingly unknown team to become a hot ticket item on the rankings in the early goings of XC. The question is, if they do make it to NXN out of a extremely strong Midwest region (the three teams that beat them also return 6 out of 7 runners from last year), how will the nationally inexperienced squad fare in Portland come early December? 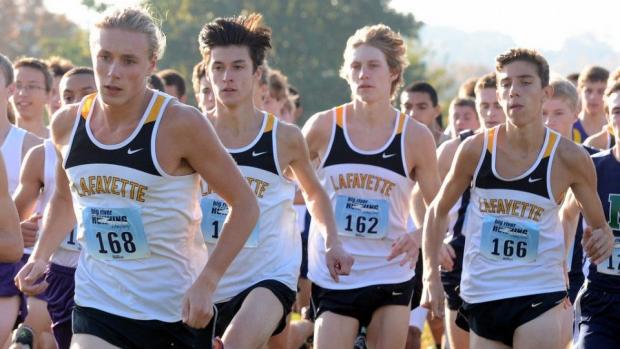 Lafayette surges to the front of its Class 4 District 2 race last year in Saint Louis, MO where the boys placed four runners in the top five led by Austin Hindman (bib 162)

How has summer training been going for your team? What do you focus on during the summer months?

Training went extremely well over the summer. Despite the record amount of rain fall during June/July the guys were able to get the work in they needed to be ready for the start of the season.

During the summer we really focus on 3 aspects of training. The first is building weekly volume. Every year we try to increase our highest mileage week by ~15% and this year our seniors maxed out at 58 miles which is the highest we’ve ever had. Secondly, we do a lot of work with longer tempo runs at a marathon pace that’s equivalent to their goal 5k time. I usually use www.mcmillanrunning.com but you can also use Jack Daniels vDot tables or anything like that. To do this while increasing volume we did a lot of 8 mile fartleks with 60s @marathon pace, 60s off and started our first practice with a 5 mile time trial at Babler state park, which is insanely hilly. The last thing we focus on is hills/speed work. We start with hill repeats and progress to 400’s a little slower than their mile race pace by the end of the summer. The goal here is to maintain the speed we spent all track season developing while trying developing the ability to maintain that pace for longer distances.

Honestly, I’ve been impressed with all of them so far. They all have made significant improvements from where they were at this point last year which is all I can ask of them.

Devin Meyrer, Alec Haines and Dylan Quisenberry are the leaders of the varsity group this year. They stand out because they are always ready to bring their A-game at practice every day. They also each bring a different element of leadership which, as a group, allows them to reach everyone on the team.

I think there are several challenges facing this team. They definitely have the target on their back so every time they line up they are going to get everyone’s best shot. We are going to larger out of state competitions which will increase the level of difficulty on a week to week basis. Lastly, we have to be careful not to lull ourselves into a false sense of entitlement because of the things we’ve done in the past. All the teams we will race aren’t going to give us first place just for showing up. Ultimately, the past is the past, and if we want to do even more impressive things we have to focus on the future.

All the hard work the guys put in over the course of the year.

I’m not sure we have a “staple” workout because we almost never do the same exact workout from year to year because over the course of a year every athlete on the team has changed so much. Every year we always do 2 types of workout. The first one is a “grab bag” of intervals where I don’t tell the guys anything about the workout and before they do an interval I have someone pick a card out of a bag that has the length and pace for that repetition and either have them pace it or have them tell everyone what it is as when they are all on the line. They then continue this for 6-10 intervals, depending on the total volume for the workout. We also do a lot of alterations where they guys will alternate between 1k@10k equivalent pace and 1200m@half-marathon equivalent pace.

What are your top 3 goals for this year's squad?

Any impact freshmen or transfers to join the team this season?

No transfers. I really like this year’s freshmen group. I think several of them will become excellent varsity runners in a few years. There are a few of them who are already some of our top JV guys which is impressive because our JV team is going to be pretty awesome this year.

This team has been three years in the making now as a group of underclassman has driven the team over the last few seasons. Now seniors, how have this group of guys grown since we have seen them last fall?

Between this fall and last fall most of them got way faster in track. We went 1, 2, 3 in the 3200m at state which was one of the most impressive things I have ever seen. Out of the 4 distance events at the state track meet we won which shows how much they have continued to grow and improve all year long.

What has been the key to get these athletes to not only succeed at a young age but progress so consistently over the past three years?

It’s been a 2 part process. One part is their work ethic, competitiveness and determination which allows them to do workouts that I could never have dreamed of doing when I was their age. The other part is having a year by year plan in place which focuses on slowly progressing and building on everything they have done in the past.

What’s the strength of this Lafayette squad?

Their competitiveness and sense of humor. I know the humor part seems odd, but it allows them to relax/recover on the days when it’s needed most.

It’s been a while since Missouri has had a successful team on the national level (Potosi back in 2009 or so maybe), what made Lafayette be able to break that trend?

Not putting a ceiling on what they believe they can achieve. No one would have ever thought we could have finished top-4 in state when these guys were freshmen yet we finished 3rd. After that, people thought we wouldn’t get back to state the following year and we finished 3rd again. Last year most people on mo.milesplit.com picked us to finish 3rd, except for [Paul Everett] who picked us to win, and we won by one of the lowest team scores in state history. These guys believed in themselves when everyone else didn’t and it has led them to do some pretty amazing things.