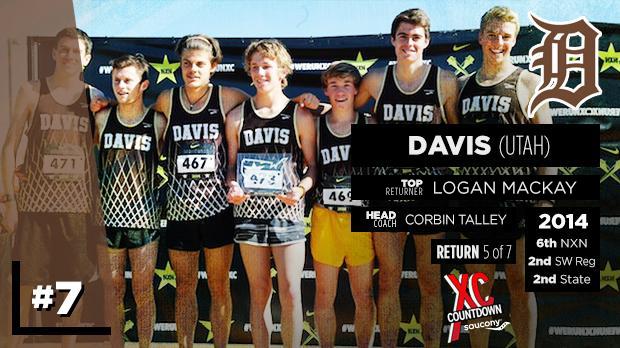 Davis is a program that specializes in having fun and running fast. Year after year the deep program knows how to reload as underclassmen step up to fill the shoes of recent graduates. Nothing has changed this year around as the Darts loss their #1 and #2 runners, Josh Ward and Stokton Smith.

On August 15th at the Dart Challenge, a race the Daivs team does every year, Colton Rimann (15:30) beat the previous high school record held by Brad Nye of 15:33. Camren Todd ran 15:33 for a the #3 all-time high school time. The team also set their "TEAM time record" (top 5 combined times) with 79:34 as well as put the most runners under 16:30, 17:00, and 18:00 then they ever have done in the past. Things are looking bright for the Darts considering this is a meet they run every year.

Last year the Davis boys lost to American Fork (AF) at the Utah State Championship (AF 1st - Davis 2nd), NXN Southwest (AF 1st - Davis 2nd), and NXN (AF 4th - Davis 6th). Expect head coach Corbin Talley to be able to rally the crew and have another group of harriers to shoot for being the best in not only Utah or the southwest, but in the nation.

Davis is located east of the southern tip of the Great Salt Lake in Kaysville, UT. This area provides the program with beautiful scenery as they train.