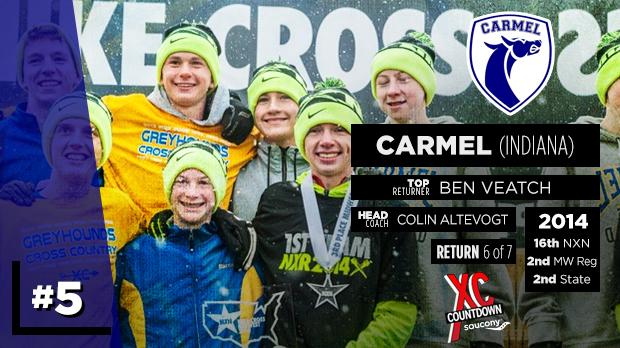 Carmel return six of its top 7th from a 2nd place team at NXR Midwest. They are led by pre-season ranked #4 Ben Veatch

Carmel is a national powerhouse year after year. The last three years the Greyhounds have represented the Midwest region at NXN placing 16th - 2015, 5th - 2014, and 11th - 2013. The massive school in Indiana clearly has a lot of national experience and expects to be in the hunt for a bid to NXN every year; this year will be no different.

Led by their calm but deadly leader Ben Veatch, the Greyhounds have quite possibly the best low stick out of any national caliber teams. Veatch is the #1 returner from last year's NXN and has an 8:53 3200m PR to his name. If the rest of the pack behind Veatch (10 second spread between runner 2-5 based off of 2014 XC 5k PRs)) can close the gap on its number one runner, the Greyhounds will not only be a threat to reigning NXR Midwest champion Sandburg, but they will also be a team that could challenge for a national championship in Portland.

How has summer training been going for your team?

Our training and attendance was excellent, as usual. It is a very large team (over 120 boys this year), and guys are adamant about being at all the summer practices that they can. That isn’t to say that they don’t go on vacations or attend a summer camp, but when they do, they still train at a high level. Our top guys believe in our system and follow our training plan exactly. In preparation for a longer season, our build-up has been a little more gradual and we have been a little more cautious with some of our more experienced runners. We are in a pretty volume-heavy base phase by now, though, and that will last into early September. We will get back to our base in early October as well.

Teddy Browning was our number two runner most often in 2014 (though he ran ill at NXN). He came out late for cross country as a sophomore in 2013 after not making the tennis team so last year was really his first full season in the fall. His training has been very good, and we are interested to see how he improves as a senior.

Drew Watson and Jonah Nichol, both juniors, had excellent summers that could vault them into contention for varsity spots in October. Neither were on the varsity last year but are much improved.

We knew our incoming freshman class would be good, but we have been surprised that they were this ready for high-level cross country this early. It has to be pretty rare to have ninth-graders ready to score on a nationally-ranked team.

Ben Veatch - senior - an absolute superstar who only cares about the team; he learned everyone’s name on the team (no small feat with our numbers)

What are some staple workouts that your team does during the season?

6-8 mile “long PPM” - a sustained threshold run, our varsity guys can run this around 5:30 pace, the foundation of our success

12-16 “Cis” - Repeat 400s at a controlled, prescribed pace with a continual jog rest (2-3 minutes between) and double rest after every four, the method to becoming race ready

What are your core beliefs in your training plan and workouts for your cross country squads?

Every athlete has the ability to impact the team positively by his effort and attitude in training.

We do what others are not willing to do.

Teams who truly care about each other achieve beyond what should be possible.

A cross country race is a matter of outlasting the other runners; our training reflects this.

Matt Cooper, a junior, is in his first cross country season. He ran track for the first time ever last year and went 10:03 for 3200 meters. He could be on the varsity.

What do you view as the strength of your team this year?

Our guys are very connected and focused. In the spring of 2014, we finished second in the state track finals in Indiana (a single-class state). This past spring, we won the state championship in track. While we had a great cross country season in 2014, especially after graduating 8 of our top 11 runners, our guys were a little disappointed to finish a close second at the state finals. Our training and focus has always been great, but the past six months they’re really turned it up to 11.

Our depth will be a huge strength, and the leadership that Teddy and Ben provide is incredibly valuable.

Our continuity with our athletes is important as well. Three of the five on our staff coached our current high school athletes when they were in middle school. We are seeing freshmen and sophomores that are more ready for high school distance training than ever before thanks to those coaches. (I would guess that our team last year was the first in NXN history to score two freshman boys, but I don’t know how to check that since grades are not listed for every year.)

In the past four years you have two state titles, a second place finish, and a third place finish. How do you have sustained success on the high school level?

On a macro level, it is a persisting excellence in athletics that permeates our school district. For our cross country program, it is excellent parent and administrative support. For our guys individually, it is their belief in our training system as well as our culture that emphasizes being a supportive teammate and having a positive attitude. Their willingness to hold the team in such high regard is vital because we will have some really, really good distance runners that won’t be in the top seven in late October.

Last year was your first season as head coach, what was that like? What did you learn in your first year?

In the spring of 2012, we really changed our training and team culture so in a lot of ways I consider that to be my first year even though I was not nominally the head coach then. We have been really successful since those changes, which were pretty drastic at the time. That is a testament to the guys back then including Bobby Browning (currently running for Indiana), Ben Anderson (currently running for Purdue) and Michael George (currently running for Dayton). They really believed in a system that was far different from what most other teams were doing; we really grew together as a program, and I learned a lot from them as a coach. That was Ben Veatch’s freshman year, and what he got from being teammates with those guys still resonates now (and will after he graduates to his current teammates).

We did learn a lot about cross training last year, pretty much out of necessity when a couple of our top guys had some minor injuries in late September and early October. We have done some extra cross training and a little less impact this summer, and I think that will keep us healthier in our long season.

A lot of key players including Ben Veatch return this season - what are your goals for the team this season?

We feel that it is important to have a continued culture and not waver from that despite our returners. We didn’t panic last fall when most of our top runners graduated while our track teams didn’t really stack up to the competition around the state, and we had a good season. Likewise, we won’t change everything because most of our top guys return this year.

I am sure our guys talk about the state meet and national finals, but our focus as coaches is getting better each week and making the most of each day.

What do you attribute as the main reasons for the success of your program?

The aforementioned parent and administrative support is huge as well as our athletes’ willingness to do what it takes in the training and their belief in us as coaches. Having the largest enrollment in Indiana - this year eclipsing 5000 students for the first time ever - certainly doesn’t hurt either.

Our guys’ commitment to put the team first will really be tested in October when we can only run our best seven in the state meet, Nike Regional and (hopefully) Nike Cross Nationals. I feel confident that they will be able to do this, but it will be tough because they all want to contribute to the team as much as they can.

The leadership that Ben and Teddy provide will be the foundation of our success. Our guys really do care about each other, and they train and compete in a way that illustrates that they care. This is a direct result of our top two guys, who always put the team first.