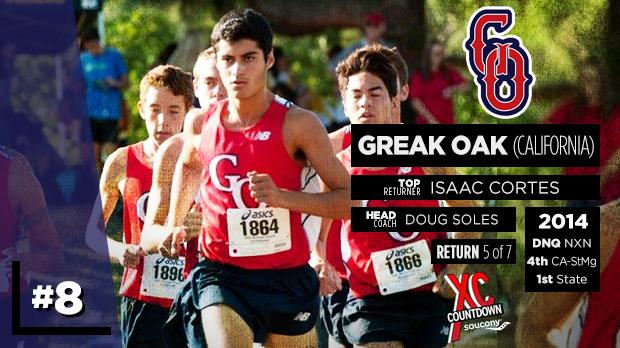 The guys from Great Oak will look for leadership from a strong senior class including Isaac Cortes, who ran 4:06 for 1600m this spring.

The Great Oak guys come in at the eighth spot on our Top 10 Team Rankings lead by Isaac Cortes and Spencer Dodds. The two are only separated by a second over 5k, as both have run in the 15:20's. Behind the two rising seniors is a large group of guys battling it out for the three remaining spots on the top five, including Cole Spencer, Solomon Fountain and Nelson Quintana. Spencer has the best 3200m time on the Great Oak team, with 8:59.45 at the CIF Southern Section Meet. Quintana and Fountain have both run sub 4:30 for 1600m and are very close to breaking the 16 minute mark in the 5K. Solomon is just coming back to full force after he suffered a broken ankle last XC season from stepping in a hole. He ran 4:21 as a 9th grader. Another guy who could add to the Great Oak Squad in his first XC season is Ryan Jones, who transferred in from Patrick Henry High School in San Diego. Jones split 4:24 in the 1600m last year in track and will be a strong addition to the team. The team as a whole has the No. 2 fastest returning 1600m times in the country with the entire top five at sub-4:30.

The rising seniors in Cortes and Dodds will look to lead the Great Oak squad to NXN for the first time ever on the guys' side. They have added fuel to the fire this year after just missing out on an at large bid last year, despite being the California Division I State Champions. The team fully expects to be on the line at NXN this season.

The team boasts a 1-4 gap of 47 seconds, but the addition of Jones and other new blood could mean that the entire top seven fits in that gap. Great Oak certainly has the ability to make a fast jump in the rankings. They will be looking to race other top teams in the nation at the Bob Firman Invitational.