Tori Weeks doesn't have to look far for motivation. When the Cabot, Arkansas senior cleared 14'4" to break the national indoor high school record for the pole vault this weekend, the former record holder bounded right up to the mat to give her congratulations. That's Tori's identical twin sister, Lexi.

Lexi, the national outdoor leader at 14'2" and the reigning Arkansas state champion, typically one-ups her sister. She set the prior indoor national record in February with a 14'-3.25" clearance.

But Tori has enjoyed a hot streak lately, including a U.S. No. 6 All-Time clearance of 14-1 to win the Great Southwest Classic in New Mexico over Lexi.

She said her record-setting vault at the Arkansas Vault Club School's Out Open this past weekend came after her "worst warm-up ever."

"We had just spent two days at pole vault camp so we had been pole vaulting all day for two days before that so actually when I woke up that morning, I didn't really feel like I had that much energy," Tori said. "My warmup was actually probably the worst warm-up I've ever had, so I wasn't expecting to jump that high. I only took one jump during warm-up, the others I would go up and bail out."


She entered the competition at 13-2, which she made on her first attempt, then advanced to 13-8. She cleared on her third attempt - "that was kind of scary." Both twins cleared 14 feet and Tori went on to jump 14'4" to win the competition.

"I think a lot of times, even when I warm-up not so great, when a bar is up there, I kind of get focused and - I don't know - I kind of focus all my energy towards that and look for it," Tori said.

Going into the meet, Lexi owned the better personal best and so Tori jumped first. The sisters are close and exchange encouraging words throughout every competition, but nabbing the record did mark some redemption for Tori after watching her sister break it earlier this year.

"I was a little bummed [when Lexi broke the record in February]," Tori said. "Obviously, I wanted to clear it, too, I was super excited for her. I don't know, it kind of pushed me to go out there and jump that height too."

The twins travel to Greensboro, North Carolina this weekend to make their debut at the New Balance Nationals Outdoor Championship. Both have ranked near the tops of the national leaderboards for years now, but have never entered the national championship due to conflicts.

Both girls will have a special number on their minds - 14'7.25," the outdoor national high school record. They plan to shoot straight for 14'-7.5." 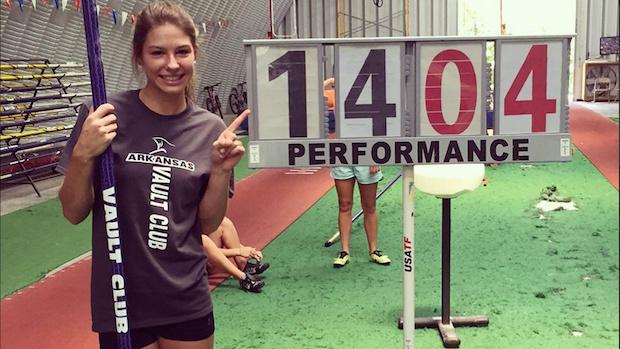 How do you add three and a half more inches of height?

"My big issue right now is just working on dropping my pole on time and leaving my hands up at the box."

That outdoor record was set just last summer by Desiree Freier, en route to runner-up honors at the IAAF World Junior Championship. Freier, now a freshman at the University of Arkansas, recently earned her first All-American honors with a fifth-place finish at the NCAA Championship. Freier nearly held both the indoor and outdoor records, as she cleared 14'6" during an outdoor meet when the pole vault was moved to an indoor facility due to unsafe weather conditions. The mark was considered "statistically valid" per inclusion on Track & Field News' All-Time List, but not ratified as a high school record because the depth of the vault box did not meet regulation requirements.

Tori said she never considered Freier's mark to be a record.

"Since it wasn't ratified, I never thought about that being an issue with who gets the record," Tori said.


No matter who owns the outdoor record by season's end, both indoor and outdoor national records belong to Razorbacks as the Weeks twins will join Freier in Fayetteville next year.