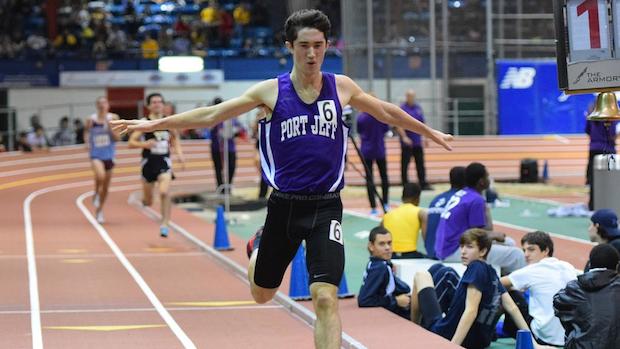 “I've always liked the mile. To me, it's the real glory event in track. No matter what event you run in track, people who don't run track are like, 'hey, what's your mile time?' And if you're a miler, it makes that experience a lot simpler. Breaking four is the main goal for everybody, really, I think that's awesome. People care about the mile a lot and I'm one of those people."

What happened to James Burke?

The Port Jefferson senior had a breakout indoor season in 2014, nabbing a Millrose Games spot and racing to All-American honors in the mile. He finished the season with a 1,600m best time of 4:11.82, which tabs him as the third-fastest returner in the nation over eight laps. Right now, he sits at US #4 on the national leaderboard, thanks to a 4:17.51 win to nab the first Millrose Games auto qualifier at the Bishop Loughlin Games in December.

But the New York State indoor runner-up finished all the way back in 16th in his signature event at the outdoor state championship. He ran nearly 10 seconds slower at the peak of the outdoor season than he had in February.

The trouble, he says, started at the Penn Relay Carnival in April.

“I was feeling real sick in the days leading up to it, but I was gonna race anyway," he said. “I've raced sick before and it's never really affected me that much." 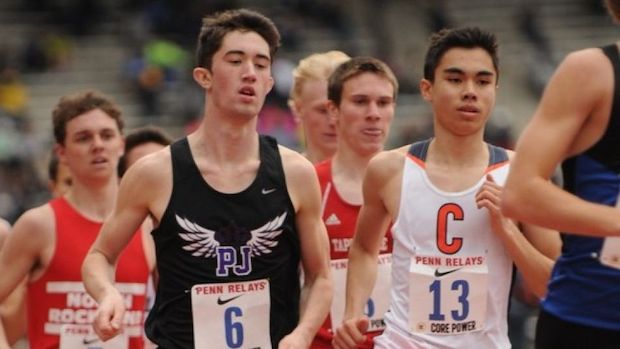 The April 24th race marked Burke's first individual appearance at the international event in the High School Boys Mile Championship. He was looking to break 4:10. Instead, he crawled through the finish line second-to-last in 4:31.22.

The answer was fairly simple - Burke was soon later diagnosed with mononucleosis, a common teenage affliction. The solution was also simple - lots of rest - though not exactly conducive to embarking on a national-level track campaign.

He took about a month completely off with no running whatsoever. He was confined to his bed for about two weeks, then slowly returned to his classes but did not workout again until a few weeks before May 19's Section 11 Division Championships.

“The 800, I still got down to 1:54 [on the relay]," Burke said, “but the mile was too much with the mono coming back and it still affecting my blood and everything."

But now - a full calendar year removed from the best running of his career - Burke says he feels he is in the fittest shape of his life.

During cross country, he defeated his home course record by nearly 30 seconds and won the Section 11 Championship in 16:57.4. But he's a track guy. Just ask him about defending his title at the Bishop Loughlin Games mile.

“I knew I had it in me," he said. “I just couldn't wait to get to the track. That race was stress relieving, just because I hadn't really put out a fast time in awhile.

“It went out pretty slow and I was sitting in the pack… it was probably about 800 meters into it, [Stephen] Garrett dropped the pace a lot and John Rice followed him, along with Grady from East Meadow. They dropped the pace very abruptly and I slowly caught up to them and then it was the four of us for those 600 meters and then the last 200, I kicked and went in the lead."

He split about 2:14 and 2:03 for each half, closing in an estimated 28 seconds for the last lap. Burke says he's ready to go for the win at Millrose, which he ranks alongside Penn Relays as his favorite track meet. 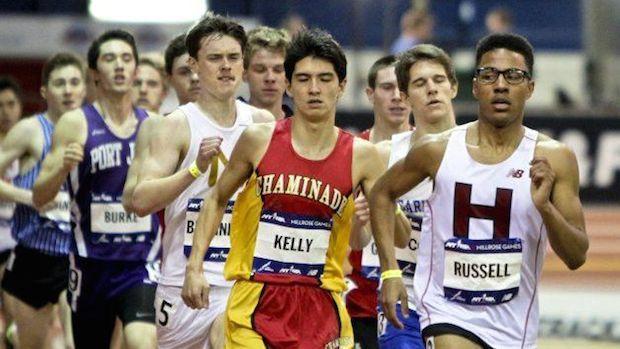 Burke (9) finished fifth as a junior in a competitive field at his first appearance in the Millrose Games' 2014 New Balance High School Boys Mile.

“Last year in the High School Mile, we got on the track right after the Pro Men's 2k took off," he said. “Lagat won that and we were warming up at the same time as Lagat. I'm warming up and passing Lagat every time I run a lap. I walked back in the Armory through the door and Alan Webb was walking in right with me and I was like, 'right after you.'

“You also get a chance to run really fast, which is definitely also a lot of fun… Everyone's fast, so it was a little different feel of a race than I'm used to, because it just went out fast from the gun and everyone's sticking together. I remember there was a little pushing and shoving, which also can be fun. [Luke] Gavigan had a real good last quarter and he kinda kicked away from everybody."

Burke will also be looking to improve his own indoor school record in the mile, with an ultimate goal of sub-4:10 during the outdoor season.

“I'm trying to get as many school records as possible," he said.

The current outdoor mile record at Port Jefferson is 4:12.

“It's pretty sweet walking through the halls and thinking I might be the fastest runner that's ever gone through the school… titles mean so much, but records mean so much, also. I've always wanted to get the mile record at my school - the outdoor one, especially, and it's eluded me so far. I don't know too many schools where the indoor record is faster than the outdoor record."

With a full year of track still ahead, Burke may have already earned his spot in the annals of New York track and field history - he owns the three fastest mile times ever recorded by an Empire State eighth grader, capped by a 4:23.14 in 2011.