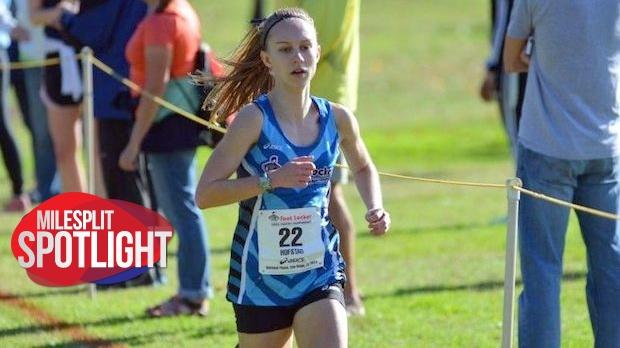 Even with a Nike Cross Nationals appearance last season, Paige Hofstad never thought of herself as a national contender.

As a sophomore, the native of New Braunfels, Texas won the Nike South Regional last year but was not in the mix on the sport's biggest stage, racing 18:17.9 to finish 41st overall at NXN 2013, nearly 90 seconds behind champion Alexa Efraimson (Camas, WA).

All that changed in 2014, as the now-junior stunned the national running scene in earning not one, but two All-American honors. She defended her Nike South Regional title before finishing runner-up to Allie Ostrander (Kenai Central, AK) at NXN in 17:26; one week later, she finished a close fourth overall at Foot Locker in 17:33 - just four seconds off third placer Makena Morley (Bigfork, MT). Hofstad was one of an elite few to go for the double and the only girl to pull off consecutive top five performances.

"I look at people who get top five at Foot Locker as gods," a still-in-shock Hofstad said after her All-American FL run. "Now that I've done that... I guess I'm on that level now."

But before November 22, the mild-mannered Hofstad wasn't even the fastest girl in Texas. Heck -- three years ago, she wasn't even her area's fastest middle schooler.

"She was actually the only person I lost to in middle school," Hofstad said. "It's always been back-and-forth and I've never won district or regionals, which is so funny because I've won state but haven't won district yet."

Despite the close proximity, Hofstad says the two elite Texans never train together.

"I think we would be too competitive," she said. "We would kill each other!"

Making the commitment to distance running was not Hofstad's biggest priority as a grade schooler.

"[When I was] in sixth grade, my sister joined the cross country team for middle school when she was in eighth grade and she'd always ask me to go on runs with her because she didn't want to be lonely," Hofstad said. "My parents would say 'no,' and I would say, 'no, I'm a sprinter!'

"One day, we went on a run around the neighborhood and I stayed right with her. I'm really competitive. After that, I wanted to beat all the boys on our team."

She was quick for a kid, but it wasn't until a surprise superlative performance at the 2011 USATF Junior Olympic Track & Field Championships that she realized her potential. She recorded final times of 4:47.33 for 1,500 meters and 10:16.25 for 3,000 meters en route to finishing fourth overall in each national event after her first summer of running 10 miles per week.

Hofstad found success early on in her prep career -- she ran to her sole Texas Class 5A State title last cross country season as a sophomore. But competing on the national level is an entirely different beast than racing in-state. She attributes nerves and lack of experience to her weak showing at last year's NXN.

"Last year, I think it was a lot of things," she said. "I think I was a little tired and I think I was a little scared. I don't want to make excuses or anything. I think I could have gotten in the top 20 [but] it was my first time there and I had a lot of pressure on me. I wanted to do a lot better. That year, I had started way in the back. I think this year, I knew I could compete with some of these girls [who] I didn't think I could beat [before]. I think I had to realize that so in the race this year, I started fast and I wasn't afraid. I think, last year, I was more fearful and too distraught in fear to try to do well."

Wavering self-confidence can derail even the fittest competitors. But Hofstad had a physical roadblock this past August, as she was forced to take four weeks completely off to rehab a stress fracture in her lower left shin. She started her season two weeks late, with a less-than-stellar first showing. But the self-proclaimed "consistent runner" raced into shape as the fall progressed, building back up to about 40 miles per week. She suffered some mild issues with tendonitis in her foot, but claimed that it did not hamper her racing.

She placed second to Clark at the Texas Class 5A State Championship before defeating the senior to defend her Nike South Regional title. But then it was time for the true test -- NXN, this season held on December 6 at Glendoveer Golf Course in Portland, Ore. for the first time. Prior to the race, MileSplit projected her to finish ninth at the championship.

"I didn't even think I was gonna get top fifteen," she said. "I knew I could on a good day, I guess, but I didn't know if I was gonna have a good day... It was the first time I realized I could do anything like that.

"I was in shock. Especially when you're next to Allie Ostrander, who's the big name, that was really strange. [The shock] is still there. I'll re-watch the videos sometimes and I'm like, 'is that really me?' I can't believe it. It's really strange." 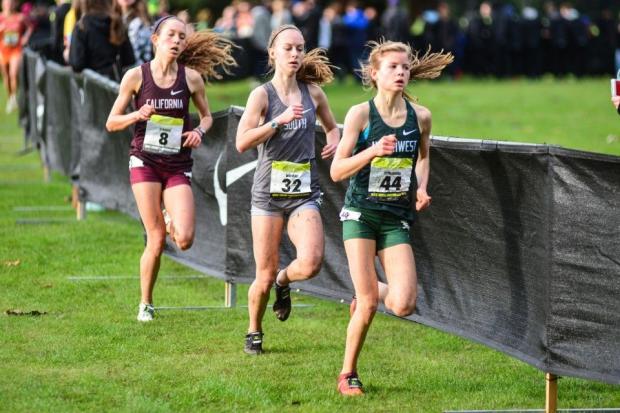 
She was nervous to double back for Foot Locker, but had confidence in her coach's training methods.

"My coach always says, 'if you're gonna do both the national meets, you're going to have to learn to recover quickly,'" Hofstad said. "During the season, I didn't have much recovery time between workouts. I can always bounce back after a really hard run. Most people will have two days after a workout and I would only have one day and the next day wasn't that easy."

The New Braunfels boys team has proved invaluable to Hofstad's aerobic development -- though sometimes to the chagrin of her head coach. Her hardest workout this year?

"It was supposed to be 5:50 pace for five miles," she said, "and I was trying to keep up with this boy ahead of me and he wasn't a very good pacer, so we did it at 5:38 pace for five miles. My coach got really mad at me, but I felt really good. They're really bad at pacing, it's really funny, my coach has to yell at them, 'you're going too fast!'"

Whether or not Hofstad may have finished her season faster with smarter pacing, the world will never know.

"I was nervous going into Foot Locker because I knew I was a little bit tired because the week before, I could feel it running and not feel that fresh," she said. "I really wanted to get third and I could see [Makena Morley] in front of me, but I think if I hadn't run Nike, I could have caught her, but that was the only thing. I recovered well, I didn't die or anything. I was happy.

"I was in the top group until the first downhill and, I don't know, I'm really bad at downhills and they just hauled down the hill. There were five girls ahead and I caught two and almost caught Makena and I also held off Hannah Debalsi, so I was happy about that."

The San Diego trip capped off what was her birthday present in traveling to McAlpine Greenway Park in Charlotte, NC for the Foot Locker South Regional. Next year, she hopes to place top three in both championship events.

For now, the southern girl is ready to enjoy two weeks off from training and her secret guilty pleasure foods, Doritos and Takis - a "fuego" Dorito-like chip native to the Lone Star state.