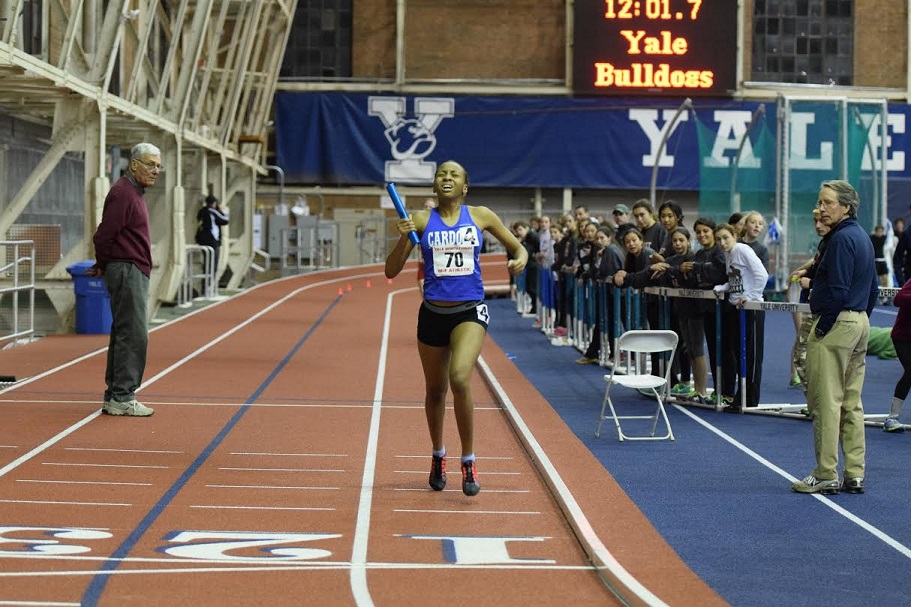 A new nation’s best and a pair of near number ones highlighted the first day of the 32nd annual Yale Track Classic on Friday.

In the featured Distance Medley Relay Championship, the girls of Benjamin Cardozo put themselves atop the national rankings with a fast time of 12 minutes, 2 seconds, knocking off a short-lived U.S. leading time of 12:04 that was set by Freehold Township (N.Y.) just two hours earlier at the NJSIAA Relays Championships in New Jersey.

Running the leadoff, junior Shaniqua Kirkpatrick gave the Queens’ school a slight lead on the pack with an opening 1,200-meter split of 3:42. Cardozo never trailed from that point with junior Alana Williams’ running sub-60 for her 400 leg, freshman Nia Lundy cracking 2:20 for the 800 and veteran senior Denise Branch never giving fellow New Yorker Mamaronek (second, 12:11.69) a chance with mile anchor of 5:02.

St. Anthony’s (N.Y.) came short on its goal of making it to the top of the list in the boys’ DMR Championship, settling for No. 2 with a still-impressive 10:21 inside the famed Coxe Cage. The senior-laden quartet consisted of Louis Santelli, Marlon Montague, Michael O’Leary and Tyler Wolfe.

Wolfe secured the gold for St. Anthony’s with a sizzling 4:22 mile leg. He held off a fast-charging La Salle Academy (R.I.) squad that took second overall with a time of 10:24.60.

“Our whole team was ready,” said Santelli, who led off the relay with a 3:10 effort for his 1,200 leg. “We were really mentally prepared for this race. After the Millrose Trials, we were so ready for this race. The time wasn’t quite what we wanted, but it was right there.”

“You couldn’t ask for anything more,” Santelli said. “We are all happy with it. We won, you can’t beat it. If we run again, we are looking for that U.S. number one. We are still going to be hunting for it.”

In the only non-relay event, the Weight Throw, Barrington (R.I.) junior Adam Kelly was just eight inches shy of his nation-leading distance with the 25-pound apparatus, establishing a meet record in the Championship event with a winning toss of 74 feet, 9 inches. Kelly broke the old mark of 73-6, set last year by former Barrington teammate and current Wake Forest freshman Charlie Ionata.

“Last year I didn’t have any throw that was under 60 feet,” he said. “I wanted to do the same thing this year and bring it up a level. A lot of weight lifting, a lot of work during the offseason has helped in my consistency.”

Kelly, a second-place finisher at the state meet last year, has big plans this season. One of those plans is to break the 14-year-old R.I. mark of 81-8.75 in his specialty.

“I think I am definitely progressing towards a state record,” he said.

Among other noteworthy performances was a meet record of 8:05.63 by Half Hollow Hills East in the 4x800 large school race. Prior to the meet, the N.Y. team’s best was an 8:13.

“Obviously we were trying to break eight minutes,” said senior Andy Freedman, who ran a second-leg split of 2:01. “But really today we were trying to come in here and run a great race and get the win. When we first got here, they messed up and put us in the second heat. It was a little bit of a mix up. Luckily we were able to get into the first heat and we ran a great race.”

Hollow Hills didn’t take the lead until there was less than 100-meters remaining in the race. Senior anchor Jake Burcham capped off a blazing 1:53 800 split with a blistering kick. Leadoff Sam Grossman was timed in 2:06 and third leg Greg Makarius ran 2:03.

“When you have a hammer on the end, anything is possible,” said coach Dave Gumbus. “I was just hoping that they would all keep their cool, and they did. We gradually built back into the race. We were in sixth, then up to third. Then you get to your anchor and you’re in second or third place, anything can happen.”