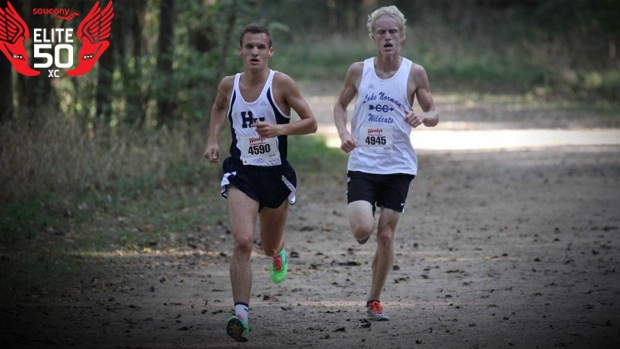 Templeton and Sheehan made it a race at the Wendy's Invite and it revealed Sheehan as a contender this fall. (Photo by Doug Hague)

Another crazy week with super-fast times being run at Great American and Wendy's Invitationals in NC.  Aaron Templeton (TN) won the Open division race at the Wendy's Invitational with a blazing 14:54 clocking, the fastest of the day, with Patrick Sheehan (NC) right on his heels the entire way to finish in 14:55.  Amazing stuff!  At Great American Ben Huffman (NC) used a late race surge to snag the win at the line in 14:59.20 with Brentwood, TN teammates Taylor Caldwell and Alec Thomas right there at 15:00.10 and 15:00.20! Louis Colson (VA), US#14 at the time, was 4th in 15:00.90.  The times are very impressive as last year Sean McGorty was pushed to a 14:43 winning time by Jacob Thomson (KY) on a much cooler day.

Sheehan debuts at #16 in the rankings after his impressive showing versus a very strong Templeton, and we can't wait to see what great things he does the rest of the season.  Ben Huffman is also making a debut at #19 after his win in the heat at Great American.  Joining them are Taylor Caldwell and Alec Thomas, the stellar duo from Brentwood at #23 and #24 respectively.

The final race not to forget was a solo battle up north in Maine.  Debuting at #21, Josef Holt-Andrews (Telstar ME) obliterated a course record with a runaway win in a very fast 15:06.92 clocking.  How fast is that? Only the fastest HS prep 5k run in Maine, and yes that includes Ben True, Matt Lane, Riley Masters, etc...