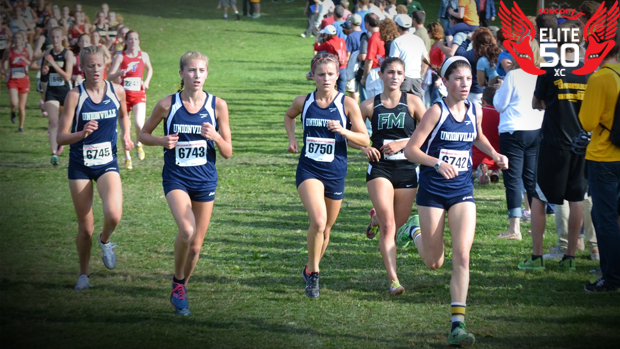 Down goes the empire! At least for now... The girls from Unionville were absolutely unstoppable, putting up 45 points and a 17:32 average to topple Fayetteville-Manlius, 79 points and a 17:59 average.  Unionville has earned their #2 slot and being led by Girls #16 Courtney Smith sure doesn't hurt!

The girls from Carmel, IN are now rocking the #1 spot after yet another impressive showing, putting up 23 points at the Culver Academies Invitational with a solid 49 second spread.

Another big mover in the rankings was Wayzata, MN, who rocked the Roy Griak Invitational with an impressive 58 points, winning by over 100 over other ranked squads!  The squad is led by Girls #19 Anna French who gave Jordyn Colter a run for her money for the individual title.

The three big Michigan squads continue to roll, this time with Seaholm taking down Northville by a big margin at the Coaching Legends Classic, 45 to 60.  The girls are led by Girls #17 Audrey Belf.

Stay tuned each week as we bring you the Saucony Elite 50 Team Girls every Wednesday morning!