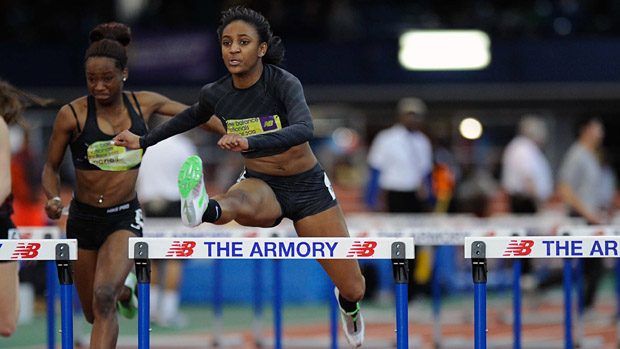 Will Dior Hall repeat in the 60 Hurdles or will Sasha Wallace spoil her record dreams? (Photo by Don Rich)

NEW YORK - Last year the storylines swirled fast and furious around Erin Finn, Dior Hall, and the girls of Grosse Pointe South (Michigan).  Their incredible feats began with a National Record in the 5000 meter run by Finn with an absolutely stunning time of 16:19.69.  Finn looked effortless in her pursuit of the record as she shouldered the pacing duties early and just kept rolling.  Dior Hall (Colorado) put on a hurdling clinic in the 60 hurdles and won with a #3 All-Time clocking of 8.19.  Grosse Pointe South won the DMR in a US#4 All-Time 11:39.29 in an absolutely dominating effort.  In addition, Hannah Meier won the mile with a time of 4:42.60 after a blistering last two lap kick.

Can they rekindle the magic this year?

Erin Finn (Michigan) had a quiet winter season after missing the Foot Locker Nationals after a heart-breaking 11th place run at regionals after battling illness for the week prior.  Quiet that was until the Brook PR meet in Washington where she showed her strength and fearless front-running capabilities by taking the 2 mile win with a time of 10:08.24.  Sounds like she'll come prepared to take another national title.  She could be challenged in the 5000 by Wesley Frazier (North Carolina) who was 2nd last year in 16:46.15, Bella Burda (New York) who has run 9:33.90 for 3000m this year, Tessa Barrett (Pennsylvania) who ran 9:47.73 this year, and Maria Hauger, Foot Locker Finalist and 10:28 2 miler.

Dior Hall (Colorado) tore up the Armory track in the 60 hurdles last year and she has been on a roll this year as well.  Dior has run the 60 hurdles in 8.17 this year, just a .01 blink off the national record of 8.16 set by Jacquelyn Coward in 2008.  In addition to the 5k this is a record that could fall this weekend as Hall will have company from Sasha Wallace (California) who defeated Hall at the Brooks PR meet with a stellar 8.18 clocking.

Grosse Pointe South can also add to the national record fervor with their attempt in the 4xMile relay.  The National Record belongs to the girls of Saratoga Springs (New York) with a clocking of 19:59.24 set back in 2005.  On paper Grosse Pointe South has PR's of 4:42.60 for Hannah Meier, 4:45.24 for Haley Meier, 4:58.14c for Ersula Farrow and 5:00.96c for Kelsie Schwartz.  Of course it is unlikely that each runner with run a PR performance, but those marks give them a paper time of 19:26.94 which should be more than enough room to secure another National Championship and a National Record as a bonus.  In addition to the team Hannah is entered in both the mile and 800m and leads all entrants in both events.  This could mean a historic weekend for the ladies from Michigan.

The 4x200m and 4x400m relays should be an exciting treat as well with some great squads breathing down each other's necks around the Armory's tightly banked track.  In the furiously paced 4x200 Medgar Evers (New York) looks like the team to beat.  They have been consistently fast and come into the meet with a US#1 clocking of 1:38.44, a full second ahead of the rest of the field.  Wakefield (North Carolina) won here last year and has also run fast with a US#2 1:39.44, so look for a strong challenge to Evers.  Swenson Arts & Technology (Pennsylvania) boasts a US#4 time of 1:39.87 and New Rochelle (New York) rounds out the favorites with a US#5 clocking of 1:40.76.

In the 4x400m relay there should be a very healthy battle up front between Columbia (New Jersey) and Medgar Evers as the squads have the top 2 times in the country of 3:46.80 and 3:47.29 respectively.  The anchor legs could be crowds-to-their-feet deafening with Columbia star Olivia Baker and Medgar Evers star Kadecia Baird battling down the stretch to bring their team the victory.  There are certainly other talented teams in the race and anything can happen in the heat of battle.  Suffern (New York) has a US#3 time of 3:50.41, Wakefield, last year's champ, has a US#4 time of 3:50.62, and Woodbridge (Virginia) has a US#5 time of 3:50.88

Other exciting battles could develop in the 1600 SMR and the 4x800m relay.  Hillhouse (Connecticut) and Columbia (New Jersey) both have super stars on their squad that could lend some excitement as 400m specialists Precious Holmes and Olivia Baker will look to break things open for their respective teams.  In the 4x800m relay Lenape (New Jersey) and Warwick Valley (New York) lead the entrants with US#2-3 times of 9:09.01 and 9:09.52 but there are several others teams that could be in the mix.  Garden City (New York) has a US#4 time of 9:10.18, Bronxville (New York) has a US#7 time of 9:12.22 and Davis (Utah) has a US#8 time of 9:14.86.

The short sprints should also provide quite a bit of excitement as there are national leading performers in the 60m dash, the 200m dash and the 400m dash.  The 60 meter dash looks like it could be anyone's to win as the top 3 in the race have PR's separated by a mere .04 seconds.  Marybeth Sant (Colorado) has the top time in the nation with a 7.30 clocking, but she was beaten by Kali Davis-White (Florida) at the Brooks PR meet.  White has a US#2 time of 7.31 in winning that one over Aaliyah Brown (Illinois) who recorded a US#3 7.34 time.  Zainab Sanni (Colorado) has a US#6 clocking of 7.47, as does Jody-Ann Evans (Pennsylvania) and Jada Martin (Georgia.  Caitland Smith (Alabama) has a US#9 clocking of 7.49 to round out the favorites.

The 400 meter dash should be a battle between US#1 Precious Holmes (Connecticut), 54.37, and US#3 Olivia Baker (New Jersey), 54.72.  Both girls have great speed but will be pulling relay duty as well so we shall see how they hold up for the 400 on Sunday.  Caela Williams (Pennsylvania) and Kendall Ellis (Florida) should also be in the hunt for a top placing as both girls have US#9 and 10 performances of 56.01 and 56.07.

The Long Jump should be a very exciting event with the top-6 jumpers in the nation vying for the title.  Felecia Majors, the superstar jumper from Virginia, has a 20-00 leap to her name and is rounding into peak form for the end of the indoor season.  Multis-star Kendell Willams (Georgia) is right there as well with a US#2 jump of 19-9 and tied with her is New Jersey jumper Keturah Orji.  Two other Jersey athletes, Cidae'a Woods, US#3 19-8, and Iana Amsterdam, US#4 19-6, could also be in the hunt if they pop big jumps on the fast Armory runways.  Colorado's Chyna Ries is US#5 19-3.5 and could also be right in the mix.

Look for Felecia Majors and Kendell Williams to mix it up in the Pentathlon competition as well.

In the Pole Vault it is an all-Texas affair at the top of the heap.  Annie Rhodes has the best vault in the nation this year at 13-7 but Laken Taylor is lurking a mere inch back with a US#3 height of 13-6.  Desiree Freier is also up there at 13-00 for US#5.  Sarah Bell (Illinois) is US#6 at 12-10 and could challenge for a podium place with a solid jump.  Kristen Lee (North Carolina) is US#7 12-9 and might challenge with a PR jump.

In the High Jump returning champ Kendell Williams has only gone 5-8 this season but she is a gamer and won the national title last year with a leap of 5-11.25, so expect her to be right in the mix if she is on her game.  Tied for US#1 are jumpers Brianna Hayes (Virginia) and Cyre Virgo (Pennsylvania), both at 5-10, so misses will likely play a role in who wins the title.  Also in the hunt are Shayla Broughton (New York), Brionna Singleton (New Jersey), Megan McCloskey (Pennsylvania), Lucy Alexander (Massachusetts), and Crystal Jones (Virginia) who are all tied at 5-8.