NEW YORK – The final day of competition at the New Balance Nationals is never short on excitement.


That trend continued on Sunday as there was plenty of noise heard inside the Armory in New York City. 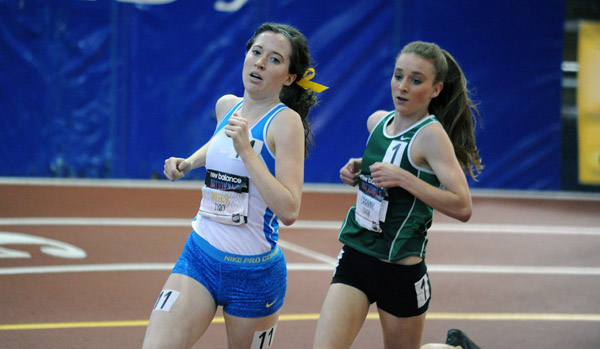 How about the girls’ one-mile run where junior Elise Cranny of Niwot High in Colorado ran an 18-second (That’s right, 18 seconds!) personal-best time of 4 minutes, 40.62 seconds to defeat defending champion Hannah Meier by a mere .35 of a second.


Both runners’ times rank No. 5 and No. 6 all-time nationally.


“I ran 4:58 at the Air Force Invite a couple of weeks ago,” Cranny said. “I had no idea I could run this fast. I knew that I came from altitude and maybe it would give me a couple of seconds, but I didn’t think I was going to run 4:40.


Evident by her time, Meier didn’t exactly give the race away. The senior from Grosse Pointe MI took the race out hard, hitting the 400 mark at 69 seconds and the 800 at 2:21. While Meier was able to break away from most of the pack, Cranny hung on and trailed by just a stride on the banked oval. The tandem went through 3:33 at the 1,200 and on the final backstretch, the 16-year-old runner made her break for the title, edging past Meier the final few meters.


The boys’ mile race proved to be equally exciting with Staples CT senior Henry Wynne displaying a furious kick the final 300 meters to win with a nation-best time of 4 minutes, 8.15 seconds. Top-seed, Trevor Gilley of Southlake Carroll TX, was second at 4:08.37.


Wynne, who two days earlier anchored his school to a win in the distance medley relay, ran his final 800 in 2:01.


“I felt good,” he said. “I know that I had a little left and that I was just going to put it all on the line the last race of the season. It’s a national championship. There is no reason not to.”


The race was minus St. Benedict Prep star Edward Cheserek, who made a last-minute decision not to run after winning the two mile about 90 minutes prior. For the quality of the field that was on the line, including Gilley, who owned the best time in the country prior to the event at 4:08.24, the pace was relatively slow at the beginning.


“The first lap was pretty good, but then we went through the 800 in around 2:08,” Wynne said. “I knew there was an earlier heat that someone ran a 4:11 mile so that was pretty worrisome.  We started moving from there. I just held on for a few laps and the last 400 I just started pushing.”


On the subject of Cheserek, the Oregon-bound runner finished off his high school career on the indoor surface by repeating last year’s feat of winning the two-mile after anchoring the 3rd-place distance medley and 1st-place sprint medley teams the previous two days. In a controlled race, he finished with a time of 8:59.0. Chantilly VA senior Sean McGorty was second (9:02.02) and Hardin Valley Academy TN senior Aaron Templeton was third (PB, 9:02.36).


McGorty, who battled Cheserek to the finish at the Foot Locker Nationals this past December before losing in the end, didn’t back down to his rival again inside the Armory. He led for most of the 16-lap race and passed through the one mile at 4:31.


In the early stages, Cheserek hung back in third place behind McGorty and Templeton and took the lead for good with 500 meters left.


Cheserek now has 10 national titles, a total that should grow this outdoor season.


McConville elected to do the pace-setting for most of the race with Frazier moving to second by the mile, which was passed at 5:10. The diminutive runner, who set a national mark for the 5K on Friday, didn’t take the lead until there was just 400 meters remaining. It was there that she put on a surge that powered her to the finish.


“I just felt like the pace was slowing a little bit and I didn’t want to get caught up in that,” Frazier said. “I just went ahead and took it.”


Oscar Smith VA senior Michael Cherry nearly pulled off a rare 200-400 double.  Cherry, who set the national record in the 300 earlier this season, captured the 400 with the country’s fastest time of 46.87. With limited rest the Florida State-bound runner was back on the track competing in the shorter race and came just a mere stride from pulling off the deuce as Nease FL senior Ceolamar Ways held off Cherry the final few meters to win with a time of 21.37 to his rival’s 21.43 effort. Those times rank 1-2 in the national rankings.


“I really wanted to do the double,” Cherry admitted. “I know a lot of people were counting me out saying I couldn’t make the 200 final.  I knew it would be hard to double, but I actually came closer than most people thought I would.  Just because I ran the 400 doesn’t mean I can’t sprint with the fast guys. I guess I showed people that I do have speed as well as strength.”


In the 400, Cherry took command at the cut-in point and just held the front-runner position the remainder of the way despite nearly getting tripped up at the 200 mark.


“This year I really wanted to go at least 45 (seconds) and get the record,” said Cherry, who was a third-place finisher at last year’s NBNI. “I got out hard to the cone. I tried to settle in a little bit. Once I hit the gun lap I was going to do it again and I got cut off and broke my stride so I had to get back up. When I was coming down the straightaway I started looking at the cut and it kind of slowed me down. But I am not upset because I still got the win.”


Ways was certainly not counting out Cherry en route to his title.


“I wasn’t expecting him to run slow at all,” he said. “I mean he might have been a little gassed because of the 400, but I just tried to use it to my advantage.”
Ways, who owned a previous best of 21.42, was hoping for a faster time.


“I ran a good time. I am happy because I won, but I think I can run a lot faster,” he said. “Anything can happen in a race, but I was expecting to run in the really low 21s and hopefully the high 20s.”


Hillhouse CT senior Precious Holmes defended her title in the girls’ 400 by edging Columbia NJ junior Olivia Baker at the line, replacing her U.S. No. 1 time from a day earlier in the preliminaries with a 53.43 clocker. Baker was second at 53.99.


Holmes, who won the 400 at the prestigious Brooks PR Invitational just a few weeks earlier, has been dominant in her specialty despite an Achilles’ injury.


“For some reason my Achilles doesn’t hurt while I am running. It starts throbbing when I stop,” she said. “It’s just amazing to win. It’s hard to believe it’s my final indoor championship of high school.”
In an expected close battle in the 200, Boyd Anderson FL senior Kali Davis-White out-leaned Ariana Washington of Long Beach CA at the finish to win with a time of 23.48 to Washington's 23.50. Benjamin Cardosa NY senior Deejah Stevens snagged third at 23.92.


Sabrina Southerland of Benjamin Cardosa ran the fastest time in the country and a US #2 AT in the 800 with a sensational 2:03.59 clocking. Laurel Creek CA junior Kailee Sawyer was second in 2:05.94 (US #2), while Classical RI junior Maddy Berkson took third in 2:06.67. 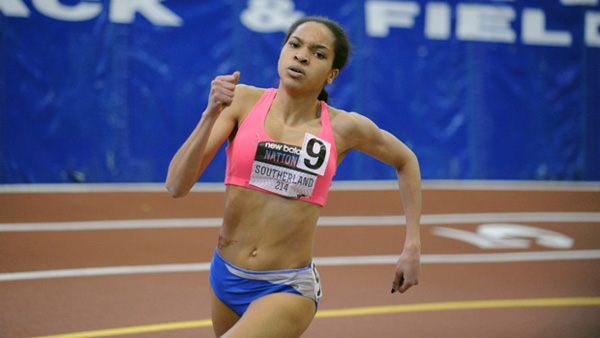 Berkson took the race out hard with a 58.6-second opening 400. Southerland didn’t back off from the pace and overtook Berkson by the third lap and never looked back.


“Basically I was just running for the win and I ended up (with a PR),” she said. “We train for this. Coach Ray (James) told us to keep going and run as fast as we can and just leave it all on the track all the time. We have been waiting for this.”


“It’s just so surreal. I am just so ecstatic right now,” Kiley said. “When I saw I was in the second section, those thoughts of me winning kind of disappeared. I was just going for time at that point. I was just going here, having fun. It’s nationals. I’m a senior. I just wanted to make it as fun as it could be. This is way beyond what I thought it would be.”


Loranger LA senior Jeryl Brazil copped the boys’ 60 dash in 6.7, while junior Clemence Paiement of Vainqeurs Plus in Quebec won the girls’ 60 at 7.4. Senior Freddie Crittenden of Utica MI took the 60 hurdles at 7.72 and senior Sasha Wallace of Holy Names CA came .01 from a national mark in the girls’ 60 hurdles with a time of 8.17.


In a close battle with Dior Hall of George Washington CO, the top-ranked hurdler in the nation, Wallace managed to gain an edge on her rival after Hall nicked the final hurdle. Kell GA senior Kendell Williams placed second at 8.35, while Hall faded to seventh at 8.71. 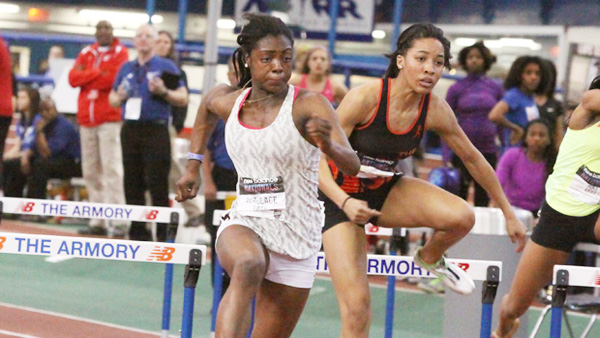 Wallace was aiming for a national mark of 8.16.


“I came real close, 8.17,” she said. “I am really happy that I PR’d from the beginning of the season until now. As for now, I am glad that I have a (national title) and I am sure Dior will get it next year.”
Senior Annie Rhodes of Waco Midway TX broke the Armory record and was just four inches shy of the national mark with her gold-medal performance in the pole vault where she cleared a height of 13-8.5.


Only three days earlier, Rhodes set her PB of 13-11.5 at the Boswell Meet in Texas.


“Clearly almost 14 feet was definitely a confidence builder,” she said. “Today I was totally about 14 feet and even the national record. I am just thankful about getting (13-8.5).”


Senior Casidy Callhan of Throw1deep in Georgia earned the crown in the girls’ 20-pound weight throw with a distance of 58-8. In the boys’ 25-pounder, two-time defending champion Rudy Winkler of Averill NY went home happy with a triumphant heave of 83-6.


“It feels pretty good,” he said. “This is my third national championship in a row. I really wanted to defend it. There was really good competition. It’s not like I won one year and then it was obvious I was going to win.  I was pretty nervous coming in to throw. I feel pretty good that I could defend my title.”

The top three times in the country were set in the girls’ 4x400 with Medgar Evers Prep NY winning the prize with a 1:37.29 clocking. Wakefield NC was second at 1:37.34 and Lincoln Way IL placed third at 1:39.51. Union Catholic NJ won their third relay of the meet by copping the boys’ 4x200.
Seton MD junior Javonne Antoine earned the triple jump a leap of 40-1.5.