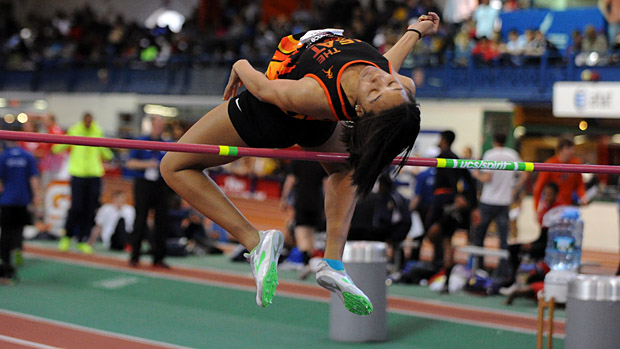 NEW YORK –Kendell Williams came into the New Balance Nationals looking to defend her title in the pentathlon.

The senior from Kell High in Georgia accomplished that goal and more on Saturday, leaving the Armory with a national record.

Williams earned the two-for-one deal with a total of 4,068 points in the five events. She not only broke the previous mark, but smashed the 2006 record of 3,924 points by Long Beach’s Shana Woods in 2006.

While she did feel a win was possible, Williams was surprised that her name is now etched into the record books.

“It feels really good, especially considering I wasn’t expecting to even come close to a record,” she said. “I just wanted to have a good day with good performances.”

“I always doubt myself,” she continued.  “I think it was because during the indoor season my performances have kind of been okay, not great. People are always telling me ‘Kendell, you always pull together when we need you.’ I was like, ‘I don’t know this time guys.’ Each performance I did well and I was trying to focus.  It turned out really well for me.”

Williams was particularly proud of her efforts in the shot put and the high jump. In the shot, she heaved the metal ball a personal-best distance of 34 feet, 10.25 inches. She was just shy of her best of six feet in the vertical leap with a height of 5-11.25.

Williams began the five-event series with a time of 8.43 seconds in the 60-meter high hurdles, the fastest time of the 12 athletes. She also did 19-0 ½ in the long jump. With one event remaining, the Kell standout cruised to a 2:31.63 clocking in the 800 to easily break the record.

To secure the national mark, Williams had to run 2:43 or faster. That helped calm the nerves considering she owns a best of 2:22.

Saturday’s competition couldn’t have had a better opening act. In the first complete event of the day, New Jersey’s Union Catholic TC also set a national mark with a time of 29.4 in the 4x55 shuttle relay. The quartet of junior Obafemi Animashaun, senior Christoffe Scott, senior Tyler Gibbs and senior Zach Gizzone knocked off the previous record of 29.45.

All four members of the squad have run 7.7 or faster this season with Animashaun ranked No. 13 nationally with a best of 7.42. Annimashaun did his part as the leadoff, putting Union Catholic near the front.

“I knew that we had a chance at the record,” he said. “I tried my best to just get out at the gun. I didn’t know the guy next to me would go out fast.  I just had to hold on and keep trying to go.”

Gizzone, who ran a PB of 7.51 to win the NJSIAA Meet of Champions a few weeks ago, didn’t feel any added pressure once he got the baton.”

“I know all four of them are great over the hurdles,” he said. “I just figured I would have to go fast.”

Virginia’s Western Branch TC was second at 29.54 and Trenton TC of New Jersey was third in 29.92.

Each member of the squad, which is comprised of junior Cidae’a Woods, senior She’quell Higgs, sophomore Gabrielle Bennett and junior Torie Robinson, had the number 32.4 written on their hands, as in 32.4 seconds.

“We knew we didn’t have the fastest time so we set a goal,” Higgs said “I guess that’s what happened.”

Winslow went into the meet with the third best time in the country of 33.28, a time it ran to win the New Balance Games on Jan. 26.

“We wanted to (win). We really didn’t know for sure,” Bennett said. “We all have fun doing it. Not being nervous - we take it like a normal meet – helped us execute well.”

Christian Brothers Academy came less than three-seconds shy of the national record in the 4x1 mile relay with a time of 17:22.67. The New Jersey quartet of senior Billy Bragg, senior Aaron Liberatore, senior Jack Boyle and junior Tommy Rooney were neck-and-neck with Cardinal O’Hara of Philadelphia for most of the race. Rooney opened the gap with a strong 4:20 anchor to spur his team to victory. The Warrior TC, of Westchester Henderson in Pennsylvania, was second at 17:23.43, while O’Hara settled for third at 17:25.08.

“It’s great. We won nationals in cross country a year and a half ago, but I would say this year is more satisfying,” said Bragg, while making reference to CBA’s 2011 title at the Nike Cross-Country Nationals. “We are all seniors. It’s our championship.”

Liberatore indicated the numbers on the clock were important, but it wasn’t the No. 1 concern.

“We really wanted to win first and the time was second,” he said. “We were two seconds off the national record. We would have liked it, but a win and a national title feel good.”

Defending champion Hillhouse CT nearly cracked four minutes in the girls’ sprint medley, winning for the second year in a row with a time of 4:00.77. Norwich Free Academy CT placed second at 4:01.95.

Sophomore Alethia Moore gave her teammates the lead right from the start with a 25-second 200 leg.

“I just wanted to make sure that my start was good and I continued to run with good form through the whole race and not really look to see who was behind me,” she said.

Senior Jayvona McDaniel increased the advantage for the Connecticut school with a solid 200 leg. Holmes hustled around the banked oval in 55 seconds for her 400 leg and senior Kellie Davis brought it home, holding off Norwich Free with a 2:14.25 for her 800.

“I really thought that we were going to run way faster than four minutes,” said Holmes, who an hour later won her preliminary heat in the 400 with a U.S. best of 53.86. “I am still happy with the time. I wish we would have run faster than last year. I am pretty happy with it, but I think I could have run a little faster.”

There also another repeat winner in the boys’ sprint medley as St. Benedict Prep NJ earned its second straight crown with a time of 3:26.19. Pope John Paul XXIII NJ was a distant second at 3:29.01.

Senior Edward Cheserek, who won his tenth national title, anchored the relay with an 800 split of 1:52.22. Cheserek and senior Naija Omaro, who ran a 400 time of 48.10 for the Gray Bees’ third leg are the only returning members from the 2012 squad.

Davan Murphree of Harmony TX copped the pole vault, matching his indoor PB and tying a U.S. best this season with a height of 17-1. John Curtis LA senior Dylan Duvio was second at 16-9.25.

“There’s a lot of pressure on you coming in,” he said. “I just had to block it out and really just try to stay calm. If I could stay calm I knew I would be good.”

“It was really good to get that one out of the way because that was my first jump and everything,” he said.

Just three quarters of an inch separated the top four finishes in the girls’ long jump with sophomore Magali Roche of Vainqueurs Plus in Quebec securing the title with a distance of 19-6.75. Kell’s Williams earned her second runner-up effort of the weekend with a 19-6.25.

Roche achieved her winning leap on his first attempt.

“It was a great jump,” she said. “Usually all my first jumps are just okay. It was my best one and I was impressed. Usually my best jump is my last.”

Based on what happened in the preliminaries, a must-watch on the final day of competition on Sunday should be in the 200. Five sprinters ran quicker the nation’s No. 1 seed with two breaking the 12-year-old meet mark of 23.78. Junior Ariana Washington of Speed City CA blazed to the fastest time of the quintet with a 23.57 effort.  Florida’s Kali Davis-White, a senior, was under the meet record with a 23.64 clocking. Senior Deejah Stevens of Benjamin Cardosa (23.89), senior Aaliyah Brown of Lincoln-Way East AK (23.98) and Wakefield NC senior Tyra Lea (24.0) should make an exciting final, scheduled for 2:22 p.m.

The foursome from Davis UT cracked the nine-minute barrier by winning the 4x800. Senior Ellie Child, senior Joanna Boyd, junior Taylor Cox and senior Shea Martinez combined their efforts for a U.S. No. 1 time of 8:56.57. Holding a slim lead over runner-up Garden City NJ (9:01.8, US #2), Martinez sealed the deal for Davis by unleashing a 2:08.6 for her anchor leg.

“We were just looking for a win,” she said. “I just tried to stay relaxed and hope for the best. It worked out.”

“Everyone showed up today and everyone performed to the best of their ability,” Martinez said. “It’s so exciting. We put so much work into this.”

The excitement continued in the boys’ 4x800 where Kellenberg Memorial edged fellow New Yorker Chaminade at the finish with the nation’s best clocking of 7:45.24. Chaminade was timed in 7:45.62 (US #2).

Trailing the final 200, anchor Dylan Murphy secured the triumph for his squad by overtaking Chaminade’s Sean Kelley with just a few meters remaining.

In the CHSAA 4x800 at the Millrose Games, Kellenberg beat Chaminade by less than two seconds with a then-best of 7:48.37.

“We race against them all the time. They are part of our league,” Murphy said. “Sean Kelley is a great runner. We battled back and forth. At the Millrose Games I went with a lap to go and I out-kicked him. Today I was a little tired so I thought I would wait. Luckily I got him”

In the boys’ high jump, junior Philippe St. Hilaire of Vainqueurs Plus Quebec earned gold with a leap of 6-7. He defeated second-place finisher Ibn Short of Hershey PA was second, also at 6-7.