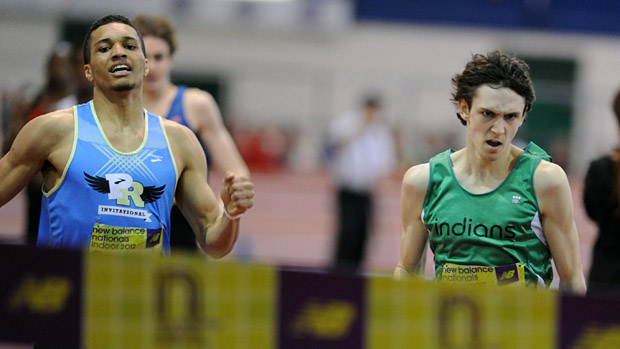 Ben Malone looks to rekindle the fire that brought him sub-1:50 last year, or will Kinniard and the Clark brothers spoil the party? (Photo by Don Rich)

NEW YORK – History was made less than three weeks ago at the Armory in New York City - site of this weekend’s New Balance Indoor Nationals - by a runner that seems to break records nearly every time he laces up his track spikes.

Edward Cheserek, the senior from St. Benedict’s Prep in New Jersey, broke a 49-year-old national record in the two-mile run at the Millrose Games on Feb. 16 by finishing the 16-lap race with an astonishing time of 8 minutes, 39.15 seconds.

The Kenyan-born runner will conclude his final season on the indoor boards at the NBIN. His curtain call at the Armory should not disappoint.

For the second straight year, Cheserek is looking to achieve a rare trifecta against the nation’s elite by achieving gold in three different events. In 2012, the St. Benedict’s standout did the feat by running legs on the first-place sprint and distant medley relay squads and also breaking the tape in the two-mile run.

Head coach Marty Hannon confirmed on Tuesday two of the events that his star runner will be competing in this weekend.

“Anything is possible,” Hannon said. “Who knows?”

Cheserek, who already has eight national titles, will conclude his weekend on Sunday.  In the two mile, scheduled for 12:51 p.m., the gifted runner will face two other competitors that have also dipped under nine minutes this winter.  Senior Sean McGorty of Chantily VA ran 8:58.49 (US #5) at last month’s Concorde District Indoor Track and Field Championships. Brock Baker, a senior from Oakland TN, posted a time of 8:59.39 (US #6) at the UK High School Invitational a few weeks ago.

Cheserek will be tough to beat in the deuce, considering that he will have an ample amount of rest from his last race. If he decides to also run the mile, an event he finished second last year, it will be a little more challenging with the race beginning less than an hour and a half before the two mile at 11:33 a.m. The field is stacked, featuring five runners among the top 10 nationally. Among that group is Trevor Grilley of Southlake Carroll TX, who recently captured the Brooks PR Invitational with the top-seeded time of 4:08.24 (US #1). Also expected to be in the mix is Chris Marco of Toms River NJ (4:10.43, US #5), New Balance Grand Prix Junior Mile winner Henry Wynne of Staples CT (4:11.93, US #7) and James Randon of Middlesex School CT (4:12.89, US #10).

Wynne has the speed to pull out a victory if the race is tight going into the final few laps. He demonstrated a furious kick this past Saturday when he copped the 1,000 at the New England Championship with a nation best of 2:25.55.

“I am definitely confident,” he said. “I know there is a lot of great competition, especially if I have to face Edward Cheserek. He’s amazing. I am unsure of my potential in the mile. I am going in and just giving it my all.”

Whether he runs three or four races, Hannon expects Cheserek to make his mark one last time at the Armory.

“It should be a lot of fun,” he said. “Edward won three races last year. Hopefully it will be something similar this year.”

Ben Malone, a senior from River Vale NJ, is the defending champion in the 800 with a 1:49.94 (US, all-time #2).  Look for Malone to be right back near the front this year for a repeat performance. Tretez Kinnaird, a senior from Butler KY, adds to the strong field. Kinnaird owns the No. 1 time in the country this year with his season-best of 1:50.97, a clocking he recorded to place second at the Brooks PR Invitational.  Senior Isaac Clark of Pleasantville NJ (1:51.72, US#4), senior Derrell Manhertz of Kingsway NJ (1:51.80) and senior Jacob Clark of Pleasantville (1:51.15 US #7) should also battle near the top.

Four of the five fastest runners in the country are scheduled to compete in the 200 and 400. In both events, senior Laray Smith of Xaverian HS and the Zenith Velocity AC in New York owns the top seed with personal bests of 21.38 for the 200 and a 47.84 for the 400. Smith appears to be peaking at the right time. He ran both his times in a double-winning effort at the Kent State (Ohio) Tune-Up on Feb. 16.

Smith’s biggest threat in the 400 could be New Jersey native and SPIRE Academy OH senior Theodore Foster, who has also run sub 48 with a best of 47.85. Other top contenders include Trenton Central NJ junior Zyaire Clemes (48.07, US #4) and Oscar Smith VA senior Michael Cherry (48.08, US #5).

Louisiana boasts the two best pole-vaulters at the NBIN with Sumner junior and state record-holder Devin King the No. 1 seed with a nation-leading height of  17-1 and John Curtis senior Dylan Duvio at No. 2 with a height of 16-9 (US #2). Both cleared their personal best with a 1-2 finish at the LHSAA Indoor Championship on Feb. 23.  Big Sandy TX senior Daven Murphree has done 16-8 (US #4).

Andre Jefferson, a senior from John Tyler TX, will be tough to beat in the long jump. He enters the meet with a best of 24-11 (US #2), almost a foot further than his nearest rival, Greece-Olympia NY senior Desmond Mobley at 24-1 (US #3). Jefferson has shown consistency in the vertical leap, breaking 24 feet three times this winter.

Hillsborough FL senior Jeremiah Green, who won the NBON title in the triple jump in June, has a good chance to snare the indoor crown as well. He has twice leaped further than 50 feet this winter with a season-best and the country’s No. 1 distance of 50-6.5. Woodside VA senior Aaron Worrell and Brunswick NJ senior Jon Pitt have both done 49-7.5 and could give Green a challenge.

Bridgeton NJ senior Braheme Days has potential to break 70 feet in the shot put. Days has the top seed with his PB and nation-best heave of 69-0 (US #1).  He recently won the Eastern States with a distance of 67-8. Waverly OH senior Dylan Dyke (64-0, US #3) is his closest pursuer.

Nine of the top 10 weight-throwers in the country will be at the Armory this weekend. On paper, it looks to be a battle between Averill Park NY senior Rudy Winkler and Barrington RI senior Charlie Ionata. Winkler has the furthest throw in the country for the 25-pound weight at 79-6.75, while Ionata is not too far behind with a best of 78-8.75 (US #2).