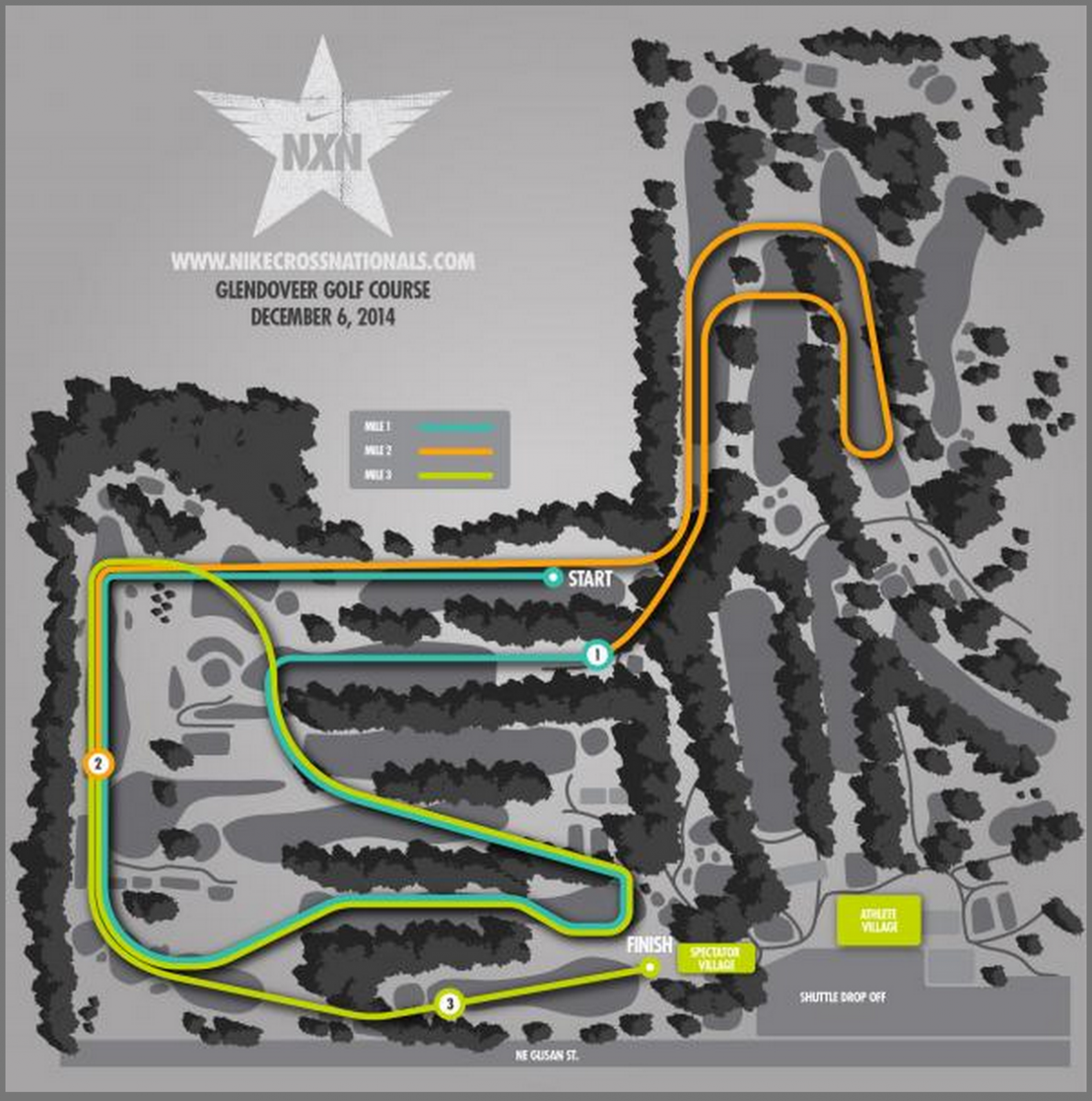 The Nike Cross Nationals is comprised of 8 Regional Qualifying meets and the National Finals in Portland. The 2014 national champions will be crowned on December 5 at the 12th annual Nike Cross Nationals. Eight regional championships will qualify both teams and individuals into one race for all the marbles over the tree-lined terrain at Glendoveer Golf Course in Portland, OR.

Fields of 22 seven-person clubs and an additional 45 individuals (male and female) will lay it all on the line in the quest for the sport's biggest prize, the coveted Winged Goddess of Victory statue.

* Awards to follow each race
* Schedule subject to change

Eligibility
High school aged students in grades (9-12), born September 1, 1992 or later. (Certain states allow those in the 7th and 8th grades to compete; athletes in those grades from those states will be allowed to compete as well).

Individuals may compete as well according to the guidelines noted above. All individuals must compete unattached.

HOW DO YOU QUALIFY?

Automatic qualifiers into Nike Cross Nationals from the NXN Regionals: The top two placing clubs in each gender of the Championship Division race at each NXN regional will earn automatic berths to NXN in Portland. Additionally, the top five placing individuals who are not on automatically placing clubs will advance to NXN as individual qualifiers.

At-Large qualifiers into Nike Cross Nationals from the NXN Regionals: A total of four at-large club berths per gender will be awarded. Clubs placing either third or fourth in the Championship Division race at each NXN regional will move into a pool of clubs receiving consideration for advancing to NXN as an at-large qualifier. A committee of experts will determine the at-large qualifiers.

What is Nike Cross Nationals (NXN)?
It's the Ultimate XC Experience! Nike Cross Nationals is a series of regional championship events culminating with the national championship. All high school athletes are invited to compete in the NXN Regional Championships. The top two clubs and top five individuals not on a qualifying club will advance to the National meet. In addition, four at large clubs will also be selected to compete using these guidelines.

Who can compete in the NXN Regional?
Just about anyone in high school! If you are eligible to compete for your local high school, you're eligible to compete here! Oh yea, it also takes a bit of guts and a willingness to have fun! By the way, this isn't only for the fastest clubs around... we've got races in the schedule for open division and frosh-soph! Heck, your regional might even have a community fun run' available!

Do I have to compete as part of a club?
Nope! That's why we've changed the name to Nike Cross Nationals, cuz we're taking individuals too! If you wanna race, then we've got the place. Just register in time and we'll find a space for you. If you're ultra swift, we'll save an individual spot for you in the featured Championship Division race!

What if our club doesn't have seven runners competing at the regional?
Well, it takes five to be an official and accepted club entry. The good news? Each of you can still sign up to compete as individuals are share in the competition!

Can individuals qualify to Nike Cross Nationals?
You bet! The top five individual boys and girls placers from non-qualifying clubs in the Championship Division race at each regional earn individual spots to NXN in Portland! More qualifying info here.

Why should I run at the NXN Regional?
The reason you wanna be at this ultra-cool event is because the very best clubs and the top individuals from your neck of the woods will be there, making history in the first ever combined club & individual regional championship in history! We're talking about the experience of a lifetime: total VIP treatment, marching bands, professional Nike athletes, awesome competition, a chance to strut your stuff, and maybe even the chance to run your way into the first-ever Nike Cross Nationals meet in Portland! How cool is that???

How many races will there be at the Regional Championships?
The number of races may vary by region. Every region will have a championship race (Nationals qualifier), and an open race. Some regions may host a frosh/soph race if there is sufficient interest and/or overflow from the Championship and Open races. Some regions may also include a community race. Every high school harrier - no matter what ability - has a spot. Check your Regional Championship's page to verify which races will be run at that specific region.

Will clubs be invited to register for the Championship section?
There is no formal invitation. All clubs/individuals are welcome to compete and must register for the NXN Regional races regardless of what section they are entering, including the championship section. Clubs/individuals will then be seeded into the appropriate race. Race registration will close the Sunday before the regional races.

Is transportation provided to the NXN Regional Championship?
No, clubs are responsible for their own travel and accommodation, but a list of recommended hotels can be found on the regional web pages.

Can a club petition the committee for inclusion in the Championship race if it feels wrongly denied entry?
Yes, all petitions will be weighed carefully and equally.

If a club qualifies for the NXN Finals, where do they register?
Clubs will be contacted after the race about registration procedures.
Start a new topic