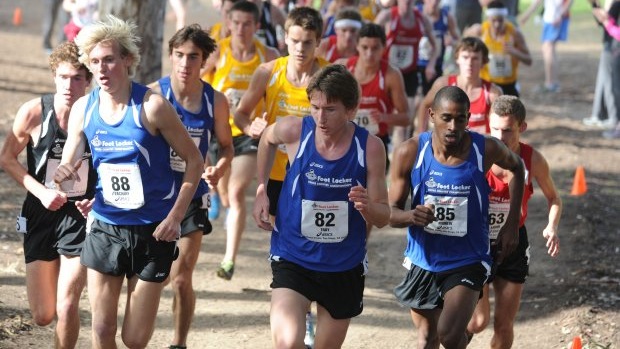 Perrin leads a contingent of West boys up the big hill. (Photo by Don Rich)

4 30 a.m. - Woke up and began to get ready for the flight out of Glacier National Airport in Kalispell MT.

7 a.m.-  I boarded the plane with my fellow west teammate and good friend Troy Fraley. Although we were both very excited to be landing in San Diego soon, we were both able to catch a few extra hours of sleep before we landed in Denver, Colorado for a two-hour layover.

9:30 a.m.- Troy and I landed in Denver International Airport. For the next few hours we kept ourselves busy (and awake) by stopping for delicious smoothies at Jamba Juice and taking pictures of random strangers passing by.

11:30 a.m.- We departed Denver soon to be landing in our destination of San Diego, California. Still tired from our early morning. The plane ride was rather uneventful, we were able to catch up however, on some much needed sleep.

1 p.m.-  Finally in our destination of San Diego California! We were picked up from the Airport in a charter bus along with other fellow athletes.  We crossed a large bridge to get to the island where Hotel del resides.  At this time troy and I were able to meet new people, such as Sandie Raines. An excellent runner from Houston, Texas!

2-5 p.m.- There is nothing quite like walking into Hotel Del Coronado for the first time. The building is an architectural and historical work of art.  I was left utterly speechless by the beauty and fine detail of the whole entire building.  Upon arrival we were escorted into the game room, a fantastic place filled with snacks, a Ping-Pong table and free arcade games! We were given our gear in this room. Let me say that Footlocker really hooks you up if you make it to nationals and if nothing else, let the ridiculous amount of free gear be your motivation to get here.  After checking into my room, I left for a run next to the beach with Jake Leingang, Andrew Gardner, Troy Fraley and Johnny Dressel.

5:30-8:30 p.m.-  We made our way to Grand Hall where we were presented with an amazing dinner and a ridiculous amount of food! Anything that you could imagine eating was present at the buffet tonight!  After dinner we made group t-shirts with our region. West made cape’s that said “West Gone Wild”. These amazing pieces of craftsmanship dubbed us as the champions of the T-shirt contest!  We next played minute to win it. With 10 rounds of ridiculous games, everyone had a great time and it brought our team a lot closer together!

7 a.m.- Headed down stairs to the Coronet room to get some breakfast, exclusively for the Footlocker athletes. I had a fantastic night of sleep last night, Hotel Del Coronado seriously has the most comfortable bed’s I have ever slept in! If you are ever in that area and are looking for a place to lodge for the night I highly recommend it!

9 -11:30 a.m.-  We began to board the buses and left for Balboa Park where we would walked the course before the race tomorrow.  Troy and I got a good 3 mile run in followed by some strides before returning to Hotel Del Coronado.

12-5 p.m.- After lunch, The majority of the day was spent relaxing in our room’s. Although we wanted to go explore, Troy and I decided to try and save our legs for the race and spent the day watching “The Office” and “Fresh Prince of Bel-Air” on T.V.

5:30-8:30 p.m.- The rest of the evening was spent eating amazing food once again and then having the privilege of listening to some of the best runners that America has ever produced. Ryan Hall, Kara Goucher, Adam Goucher and Meb Keflezighi to name a few!

9 p.m.-  All athletes were given there racing bib and then sent to bed. It was difficult to fall asleep having so much excitement and anticipation built up for the following day.

6 a.m.- Woke up and ate an early breakfast with all of the other athletes. Everyone was pretty quiet, but you could sense the amount of nervous energy throughout the room and the excitement to go race.

7:30 a.m.-12p.m.-  We departed  the hotel and made our way to Balboa park on two separate busses.  Team West and Midwest on one bus and team South and Northeast on the other.  The day seemed to go by very quickly after we got there. The amount of energy and running fan’s al in one location was very overwhelming, but I tried to remain relaxed and focused on the task at hand. The whole cross-country season had been very long and had slowly begun to wear me down. I was starting to feel tired and ready to take a break the week before the race, but I realized that a lot of how a season is perceived comes down to races with such a high stage as Footlocker. My goal was to go into the race. Give it everything think I had and then go celebrate the end of a great year and eat whatever I wanted. Coming into the race I wasn’t really that nervous, but I was very excited to get it under way. After the runners had all been announced and the gun went off. I found myself with 40 other runners fighting to be in the top pack.  The race was a struggle and there were many times when I felt like bagging it. I thought to myself “I’ve made it this far, so who cares how well I do today?” I was able to let go of this mindset however and race at a high level. I really enjoyed the race and closed hard at the finish. I wish however, that I could have had one more opportunity to run the course, because it was difficult for myself to gauge how much more of the race I had. Although I had a good race and was able to pull off 10th, I felt like I had more to give in the tank and wished that I could have felt otherwise.  After the race I was swept with a rush of relief that the season was over. Although I had thoroughly enjoyed every part of my senior year of cross-country, I was happy for it to finally be over and to be able to relax for a while!

1-5 p.m.- After lunch, Troy, Makena Morley, her family and I all made our way to the beach with our paddle board and skim board that we rented from a local board shop. After a few minutes we quickly threw aside the paddle and used the paddleboard as a tandem surfboard, getting 2 and even 3 people to stand up on it at one time! We spent most of the afternoon playing in the water. Most people looked at us as if we were crazy, but the water felt quite warm compared to Flathead Lake, back in Montana.

7-8:30 p.m.-  The banquet and awards ceremony took place at this time in the upper Grande hall. We all had the opportunity now to eat as much as we could and a lot of us took advantage of that!

9-11 p.m. – After dinner all athletes attended the dance. Although it wasn’t the best dance ever, it was quite comical!

11pm-4 a.m.- because we all had to get up so early, the majority of the athletes stayed up that night. We did everything from going to the store to get food, to bodysurfing at night in the ocean. The whole experience was a blast and was sad to depart for home in the early morning.

I found myself this weekend having one of the best times of my life! Having the privilege to go to San Diego and compete with the finest athletes in the U.S. is one memory I will never forget and I was also extremely fortunate to take away so many relationships from the whole event! I’d like to thank Footlocker for putting on this amazing event and treating us all so well and Asics for all the great new running gear! Running is an interesting thing and most people can’t understand why we do it and why we are so passionate about it. Having so many people close to you that share that same amount of love for running creates a common bond that not many have, or ever will experience.

Thank you Milesplit for the opportunity to share about my trip down to San Diego and for all those aspiring to be Footlocker finalists, I hope this serves as motivation to train yourself to run with some of the best and have an unforgettable experience.