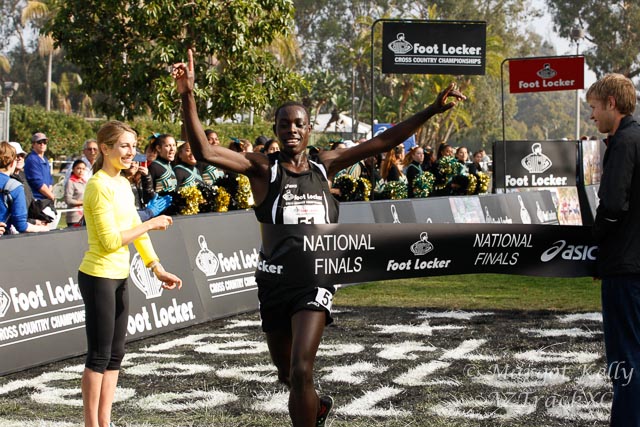 Cheserek was all smiles as he crossed the line for his 2nd consecutive title! (Photo by Margot Kelly)

The whispers might not have made it back to St. Benedict's Prep School in Newark, N.J., but they were out there.

Would Edward Cheserek be able to defend his Foot Locker Cross Country Championship? Was his short season enough preparation to fend off serious threats from red-hot Sean McGorty and the other regional winners?

An answer didn't come until the final 400 meters Saturday on the sun-drenched layout at Balboa Park, but in the end there were no doubts. Making a break at the base of the final downhill, Cheserek moved decisively and blazed the final uphill straightaway, flashing a smile and raising his arms in victory again in San Diego.

“I knew that coming to defend the title was really good for me,” said Cheserek, who completed the 5,000-meter test in 14 minutes, 59 seconds. “I didn't want to come here and lose the race. So when I came here to defend, I had to make sure to win it.”

The senior became the fourth repeat boys champion, with all coming since 1997 when Abdirizak Mohamud defended his Foot Locker crown. Dathan Ritzenhein followed with victories in 1999 and 2000, and Lukas Verzbickas turned back all challengers in 2009-10.

Making certain that Cheserek's title defense was no easy task was McGorty, this year's Foot Locker South champion from Chantilly, Va. A 10th-place finisher last year at Foot Locker Nationals, McGorty had five sub-15:00 races to his credit in 2012 before the trip to the West Coast. 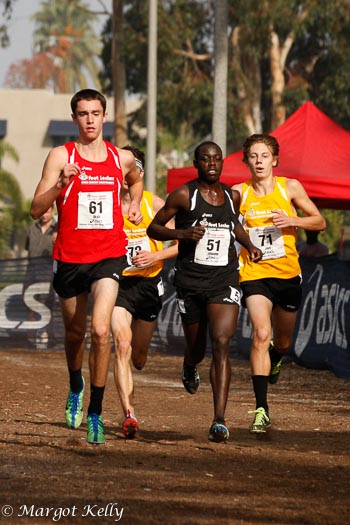 “I knew that (Edward) was really good at attacking hills and then his finish so those were probably the two main things I had to worry about,” said McGorty, who claimed runner-up honors in 15:05. “Going into the hill the second time, he did put in that surge and I was able to respond and get back up with him coming into the downhill so I was happy with that.

“At the end, I felt my legs and he had that extra gear. He executed perfectly, and I just wasn't able to respond.”

With the field bunched together and racing fourwide, McGorty, South teammate Jacob Thomson of Louisville and Midwest winner Jake Leingang led the 40 competitors through an opening half mile in 2:20. The steady pace put the leaders through the first mile in 4:45, a tempo that the winner's coach noted fit their race plan.

“We know he can run fast, (and) he's got a great kick, as you saw,” St. Benedict's coach Marty Hannon said of his standout, who started his season in mid-October after focusing on the SAT. “We told him to go through the mile in about 4:45, and he was dead on. These guys were trying to push the pace, but that was very comfortable for Edward.

“We told him you run the hills very, very well. Anytime you get to that hill just blow them away, which he did, particularly the second time. So he ran it to a T.”

A year ago, Cheserek battled to the finish with Futsum Zeinasellassie, earning the winner's trophy by six-tenths of a second in 14:51.5.

“He's a very strong hills runner, we told him you're the best going up those hills,” Hannon said of the winning race plan. “Make them work on those hills just like you did Futsum last year. And then he has a kick. He's a 1:49 800-meter guy, so we knew that if it came down to a footrace, he would be able to kick with almost anybody.”

Heading into the second lap around Balboa Park, the lead group had McGorty at the point followed closely by Cheserek, North Dakota's Leingang and NXN champion Sam Wharton of Tipp City, Ohio. About 15 to 20 meters later came the chase group of Thomson, Robert Domanic of Lewisville, Texas, Nicholas Raymond of Erie, Mich., and Aaron Templeton of Knoxville. And then another 10 meters back to Wisconsin's Ryan Kromer and a West trio of Benjamin Saerel, Andrew Gardner and Troy Fraley.

“When you put the top 40 guys in the nation together, you're going to all run together and try to key off each other,” Leingang said. “I knew it would be close for the first mile or two.”

After another trip away from the start-finish area and around Balboa's dog park, McGorty had Cheserek in his shadow and the Midwest duo of Wharton and Leingang steps behind. The clock showed 9:45 at two miles.

“To me I wanted to stay in the pack because I didn't want to take off crazy and maybe die at the end,” Cheserek said. “I was like, 'Just take it easy,' and maybe get stronger at the end of it.”

The leaders continued to battle back up Balboa's hill for the second time as the finishing order was still anything but decided.

“You really have to be on your game on this course,” said Leingang, who held together for third in 15:07. “So many obstacles and with the competition there too, you had to focus and really what I had to focus on was the hill, try not to let anyone pass me up the hill because that would set you back to get passed up the hill.”

Cheserek and McGorty drew away and were side by side on the final downhill before the definitive tactical break of the race by the winner.

“I was trying to test (Sean McGorty),” Cheserek said. “He was stronger on the hill. I waited a little over there and wait for him to come, saved a little bit and then maybe the last 200 meters to go, I'd go.”

Although he was not able to keep Cheserek out of the history books and place his name there, McGorty was pleased with his performance in San Diego.

“The runners here are the best in the nation,” he said. “That shows the types of runners that Foot Locker is able to draw in, and they do a great job of setting up a race that really is going to bring the best runners here and show off their talent.” 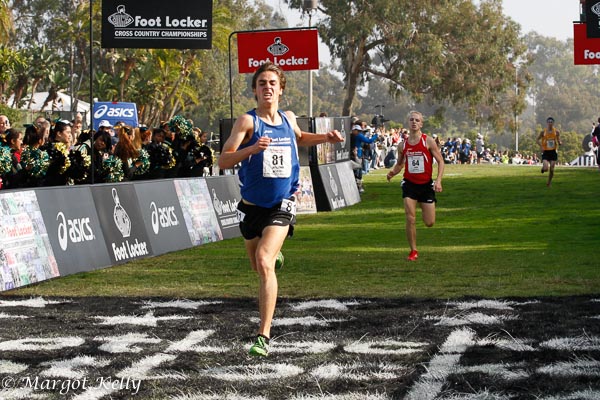 “This course is a lot harder than I expected it to be so I was glad that I kind of went out slow,” Saarel said. “From there you're just trying to work up on people. I saw the main pack go and (I said) I probably can't hang with those guys today.

“I saw Jake Thomson and ran up to him, got on his heels and we pulled along and came back on a bunch of guys and it was awesome. The people at the front were running a really smart race. At the end it was all about your heart. Congratulations to (Edward) on his second title.”

In the team competition of the 34th annual event, the McGorty-led South had three finishers in the top seven en route to a four-point victory over the West, 42-46. Midwest was third with 54 points followed by the Northeast's 81.