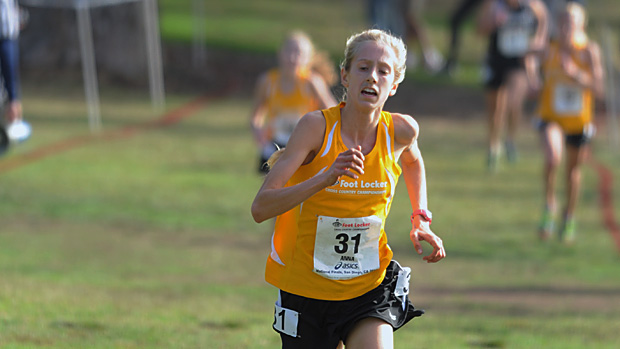 Rohrer pushing herself to the end and an amazing victory. (Photo by Don Rich)

One of the strengths this fall for young prodigy Anna Rohrer has been her growing ability and commitment to be prepared for anything in a race and readiness to make adjustments on the fly.

Until Saturday, she hadn’t had to adjust to a fall – at least not in a major XC race.

But it doesn’t get much bigger than the 34th Foot Locker Finals at Balboa Park in San Diego, held in near-perfect (low 60s, dry, little wind) conditions.  Indeed, the Mishawaka (Ind.) sophomore took a tumble at the bottom of the starting stretch, about 300 meters in, as the field took its first turn.  Rohrer said it had happened in track once, but certainly not with this much on the line.

“No one is expecting to fall,” she said.  “It kind of threw me off.  I made sure to get up as fast as I could and get back up to the lead pack. I lost some energy and was more tired than I should have been at that point in the race, but I just hung on and recovered after a minute or two.”

Once Rohrer got resettled, she hung with the pack as Midwest teammates Maria Hauger (Shakopee, Minn., senior), Jordyn Colter (Cherry Creek, Colo., soph), and Taylor Werner (Ste. Genevieve, Mo., frosh) pushed the pace.  Then, around the two-mile mark – just as in her Foot Locker Midwest victory – Rohrer was able to take control.  Hauger and Colter kept trying to close the gap, but the Indiana state champ had too much and kicked home to win in 17:25.  She’s the second Indiana girl ever to win here (Celeste Susnis, 1988) and the first non-senior since 2007.

“That last mile definitely needs to hurt,” said Rohrer of her winning effort.  “If it doesn’t, it’s not the right race.  I made sure to make it hurt real bad and left it all on the course for sure.” 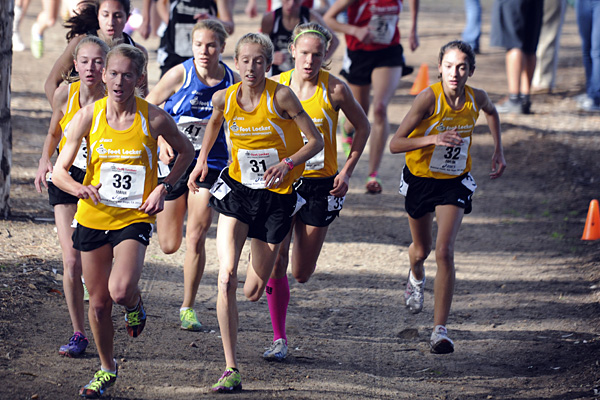 Wisdom held that in a field with no heavy favorite and the most experienced girls not being hard front-runners, there would not be an ultra-fast start.  But anyone who watched Williams win FL West was not too surprised to see her duplicate her winning regional strategy here, as she burst out to a downhill 66-second first 400 and hammered as long as she could.

As the field moved around and back up, Williams slowed a bit and that was all the opening needed for a Midwest charge that was the dominant theme of the rest of the race.  Hauger spearheaded the takeover, while Colter and Werner flanked her.  “I liked how I was not leading in the beginning, but then I wanted to be up front,” said Hauger.  “I went with how I felt.”

The leaders went through the mile in 5:18, with Rohrer gradually returning to and maintaining contact and Ackerman joining as well.  Rocha and Chase joined them, making three of the four regional champs in the lead pack of seven, with Williams not too far behind.  At halfway, it was the Midwest quartet of Hauger, Colter, Werner and Rohrer, plus Rocha and Chase, ahead of everyone else.  Jochen would move up to challenge a little later, while Werner would fall back.

Then, just before two miles, Rohrer started moving and began to gap the field.  “I was ready to make a surge and I did it a little bit earlier than I was planning,” she said.  “But I just felt ready.

Jochen moved ahead of the chase pack briefly, but for most of the third mile it was Hauger and Colter, with Rocha following as they tried to keep Rohrer in their sights.

“Honestly, the last hill was pretty killer,” added Rohrer.  “I’ve been training on hills all summer and especially the last month or so.  I was prepared for it and kept telling myself, ‘You’ve trained for this and you’re strong.’”

How did Rohrer feel as she was closing in on the finish, with her teammates still in striking distance?  “I had no idea how far or close they were ... I was thinking I want to win this and I need to finish it now ... to be here and win this is out of this world!”

Rocha said she was losing a little steam at the end, but hearing her family encouraging her – her parents and uncle were all Foot Locker Finalists – got her going.  “I have some speed because I used to play soccer,” she said.  The three-time finalist (seventh last year, 31st in 2010), who didn’t really expect to win the Northeast Regional, was similarly modest in her goals today.  “I was confident I could run faster than last time, but I didn’t know if I’d place higher ... but it’s kinda cool that I placed higher than anyone in my family ever has.”

“I didn’t even think I would make it here,” said Colter, who had passed out and not finished her 4A state meet after winning it as a frosh.  “The regional meet was redemption.  I really pushed today and it paid off.  This is a new chapter for me.” 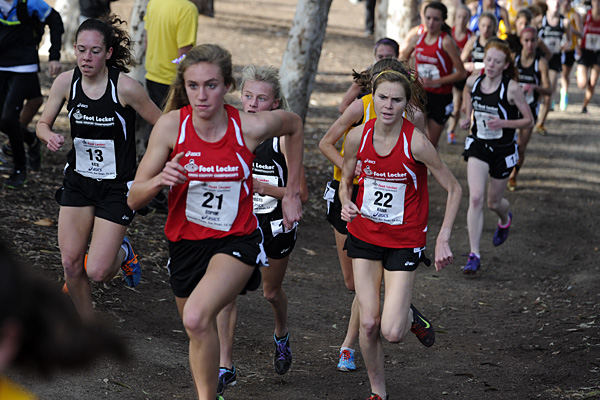 They both wanted to win, no doubt, but the 1-2 finishers from the South, Chase and Jochen, were still quite impressive with their finishes.

This time it was Jochen finishing ahead of Chase, and moving up from 12th here in 2011.  “I felt her pulling on me and I was pulling on her.  She helped me feel like I can do this.”

Jochen she wasn’t quite able to go with Rohrer in the final mile, but knew she needed to maintain to finish as high as she could.  She would duplicate her fifth-place finish from NXN last week. “I met both of my goals.”

Chase was 11th last year (and 38th in 2010), moving up six spots – very good, but just not quite what she wanted.  “It was kind of bittersweet,” she said.  “I was a little disappointed.  But when I stepped back a little and thought about the whole weekend, the opportunity to hang out with these great girls, it’s been a really humbling experience.  I feel so blessed.”

Chase added that the sense of comradeship Jochen said she felt with her was reciprocated.  “Me and Karis have such a great bond,” she said.  “We just push each other so much.  I come from a great team at school, so the team aspect here was really important to me.”

The Lake Braddock (Va.) senior also had a lot of appreciation for the unique role played by Grace Tinkey, the three-time finalist from Macon Presbyterian Day School in Georgia who couldn’t compete at Foot Locker South due to injury.  “Grace was the best,” said Chase.  “It was sad she didn’t qualify this year, but as a ‘Team Mom’ she was even better.  I was really nervous early this morning before the race and we walked down to the beach and she talked with me awhile.”

Indeed, the ultimate individual cross-country championship has a unique team element.  And on this weekend, it was Rohrer and Team Midwest who ruled Balboa.