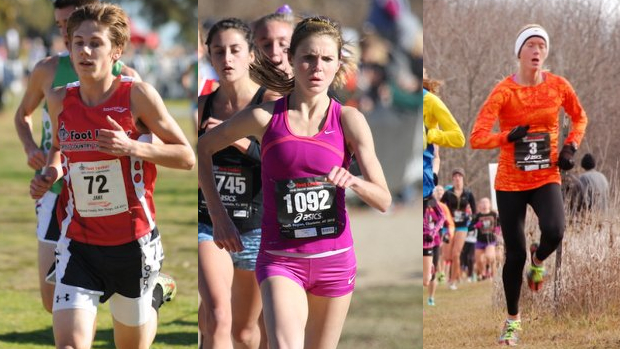 Heading into Saturday's Foot Locker Cross Country Championships, many of the qualifiers have compiled a treasure trove of starting line time in the nation's most prestigious season-ending races. Thanks to their performances in Charlotte and Kenosha, a dozen Foot Locker Finalists from the South and Midwest are competing with the nation's best for the second time in eight days.

Only time will tell how trudging through swampy Portland a week ago factors into the efforts of these adventurous 12 answering the call Saturday at Balboa Park.

North Dakota's Jake Leingang is definitely not a stranger in the December national title races. A qualifier and top 8 finisher last year at both national events, the senior prepped for this year's national double by winning the NXN Heartland and Foot Locker Midwest regionals. The wet layout in Oregon relegated him to 59th so he will be working to make up for a missed opportunity when the gun sounds in San Diego.

One who arguably benefited the most from the quagmire Dec. 1 was Ohio big-school state champion Sam Wharton, who broke the tape in Portland after having a pair of seconds in the Midwest regionals. Wharton is the 8th NXN boys titlist to try for a second national championship, with Lukas Verzbicas in 2010 the last racer to bag both crowns.

Ryan Kromer used a fifth in the NXN Heartland to get the chance to crack the top 10 (No. 9) in Portland. A seventh in his home state of Wisconsin at Foot Locker Midwest has the senior ready for another shot at national glory.

Leading York, Ill., at yet another NXN appearance, senior Scott Milling was 27th in Portland. Earlier this post-season, he finished ninth in Foot Locker's Midwest meet.

In the girls race in Wisconsin, four more guaranteed themselves of two trips to the West Coast before the holidays. Taylor Werner of Ste. Genevieve, Mo., was third in the NXN Midwest and the runner-up in the Foot Locker Midwest. Werner was 40th in Portland and is the first freshman to individually qualify for both national meets.

Maria Hauger of Shakopee, Minn., is one of two girls to earn invites to each national event for the second consecutive year. The senior won the Heartland NXN race and was third in the Foot Locker Midwest before finishing 14th in the NXN final. In 2011, she was 24th in NXN finals and 21st in San Diego.

Two other seniors also will be putting the wraps on a busy post-season Saturday morning at Balboa Park. Courtney Ackerman of Wilmette, Ill., recorded fifths in each of the Midwest regionals before claiming a No. 6 finish at the NXN final.

And Bobbie Burgess of West Lafayette, Ind., traveled a slightly different path to Portland after her so-close sixth at NXN Midwest was good enough to go west as one of the top five deferred their spot. Her ninth at Foot Locker Midwest served as her warm-up to a 30th at the NXN final last Saturday.

In the South, Robert Domanic of Lewisville Hebron, Texas, was the winner at NXN South before finishing fifth in the national meet. A fifth at Charlotte got him a ticket to San Diego.

In the girls race in Charlotte, Karis Jochen of Texas finished only a couple seconds off the lead in second after winning the NXN South regional. The senior warmed up for this weekend with a fifth in Portland. A year ago, Jochen was 31st in Portland and an All-American 12th in San Diego.

Alex Davis of Oklahoma put up a fifth in the NXN South race and a 38th nationally in Portland. She earned a spot on the starting line in San Diego with a fourth in the Foot Locker South region.

Sandie Raines of Kingwood, Texas, was the runner-up in NXN South and seventh in the Foot Locker regional. She placed 32nd in Portland.