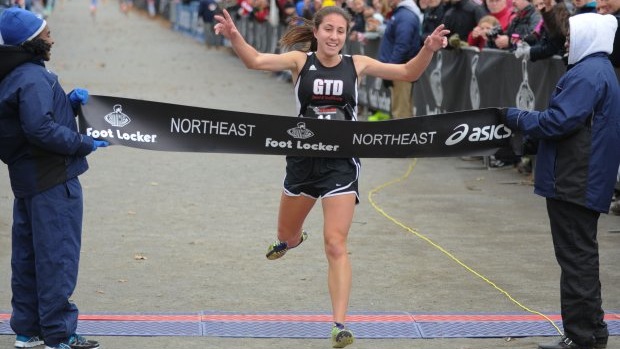 Rocha is all smiles after earning her 3rd trip to San Diego! (Photo by Don Rich)

In a few short years, Catarina Rocha has learned how much the Foot Locker cross country races have meant to her family.

Saturday at storied Van Cortlandt Park, she added to her expanding chapter in the family's event history book with a dominant performance to win the Northeast Regional championship and earn a ticket to her third consecutive national final in San Diego. The senior from Peabody, Mass., toured the century-old layout in the Bronx in 17:49.5 and finished a whopping 19 seconds ahead of the field.

“It felt great,” said the winner, whose parents both ran in the national meet in the 1980s along with an uncle who crossed the finish line in the inaugural event in 1979. “I never thought I would come in first in the Northeast region.

“My goal was just to place here and hopefully go back. It felt really good as a bonus to win it.”

Rocha, who finished third a year ago at Sunken Meadow and is the lone returnee to head west again, was near the front as the pack settled into a quick rhythm during the flat opening segments despite a gusty wind and flakes of snow. By the time the runners reached the woods, the top four finishers had established those spots at the front of the field of 112.

Members of the lead group traded the top spot during the midsection of the 5,000-meter course before Rocha took command. Eighth as a sophomore in a blanket finish for the final five spots, the Massachusetts state champion was prepared to make a move that the rest of the field could not match.

“Everyone is great here, it's anyone's race,” said Rocha, who was seventh in last year's Foot Locker national meet after placing 31st as a sophomore. “Everyone is a great competitor. I just went out with the group and hopefully stick with them if I could, and I did, and go out when I needed to because I felt fine.”

In the race for runner-up honors in the final event of the day, senior Megan Curham of Warren, N.J., shook off tired legs from the state's revamped schedule due to Hurricane Sandy and claimed second in 18:08.5.

“I stayed really relaxed and tried to do some nice short easy runs to let my legs calm down in between,” Curham said of the recovery techniques she used between the three races in the past eight days. “I felt great today, so I just went for it.

Early leader Katie Lembo of Penfield, N.Y., was the first of five juniors to finish, grabbing third in 18:11.0, while classmate Regan Rome of Dallas, Pa., rounded out the breakaway group and was a satisfied fourth in 18:13.3.

“My coach and my teammates and my friends, they all so believed in me,” Rome said of the big psychological boost she received from supporters after finishing third in her state meet due to a severe side stitch. “They really got me through the next few weeks.

“Obviously, the PA coaches didn't (believe in me), but I still had people believing in me. And I wanted to redeem myself after that. After the state championship, all I could think about was this race. That's what got me through the next three weeks. I am so happy this went well. This is what I've worked for. This is the biggest and best thing ever.”

Sophomore Anoush Shehadeh of Larchmont, N.Y., was next in 18:15.0 as only three seniors will be going to San Diego. Junior MacKenzie Barry of Mendham, N.J., used a conservative approach to New Jersey's group and Meet of Champions events during the past week to have enough left to grab sixth in 18:23.0.

“It's so exhausting, but to make it, I'm so excited,” Barry said. “I was in like 30th place in the beginning, everyone went out so fast and I was like I don't know if I can keep up with this pace. But then as we went up the hill, I started going up in the ranking and just kept going.

“I tried to take it easier for groups and MOCs. I wanted to make it here. It worked I guess because I got sixth.”

“It was definitely pretty tough to run three very hard races all in one week, but I did it so I'm really happy with that,” Ruskan said. “I definitely had to put together different kind of strategies with recovering and making sure I got plenty of sleep this past week. It's been different, but I made it through.”

Freshman Megan Reilly of Warwick, N.Y., was ninth in 18:35.8, while Kennedy Weisner of Saint Marys, Pa., was able to rally in the race's final stages to secure the final ticket to Balboa Park, stopping the clock at 18:36.8.

“I was in decent position heading into the woods, but I kind of lost it for a while,” Weisner said. “People were passing me, and I was having trouble responding. Pretty much for the whole second mile it was pretty bad.”

With four runners headed for San Diego, New York was an easy winner in the state team event, finishing with 40 points to New Jersey's 52 and Pennsylvania's 54. The top three states collected nine of the 10 qualifying spots as only race winner Rocha was not from one of the top trio.