Christine Streisel’s recent victory in the javelin at the Penn Relays did more than earn her the coveted plaque that’s awarded to the winner in the Championship of America event.

The Tamaqua (Pa.) High junior’s come-from-behind triumph, where she heaved the metal spear a distance of 154 feet, 11 inches, continued her maturation as an elite competitor. 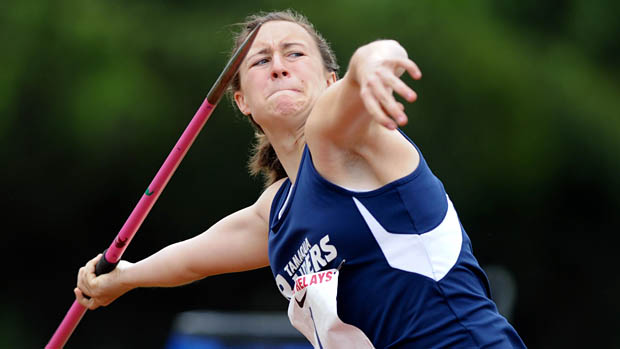 Streisel’s performance at Penn was the second-best in the history of the meet. She was a runner-up last year to current record-holder Lauren Kenney of State College, who won the 2011 event with a meet mark of 156-2. In her only time over the 150-foot barrier, the Tamaqua standout finished at 153-10.

The 16-year-old Streisel - a junior - is the defending Class 2A PIAA champion, and is preparing for her second straight title in her specialty on May 3-5. Prior to that meet, she’ll be competing in the upcoming district championships.

She is the third nationally-ranked javelin thrower out of Tamaqua in the last three years, following ex-PIAA champions Casey Wagner and Allison Updike. Wagner, a 2008 graduate and University of South Florida star, finished second at the Penn Relays her senior year. Updike, a 2010 alumni and current University of Georgia standout, was a runner-up at the New Balance Outdoor Nationals her final year at Tamaqua and shares the state all-time mark with Lakeview’s Fawn Miller (2010) of 167-2.

That’s a record that Streisel came just three inches shy of on March 30 when she captured the school’s Blue Raider Invitational with a career-best of 160-11, a distance that ranks No. 2 nationally.

Since that performance, Streisel has shown consistency by winning the Olympian Invitational at Jim Thorpe HS April 13 with a throw of 151-6. A little more than a week later on April 21, she took the top prize at the Shippensburg University’s Jack Roddick HS Invitational with a distance of 151-3.

“It’s definitely been encouraging,” Streisel said “I hit 150 (feet) last year one time and to do it multiple times and be consistent, it’s definitely the next step up. Hopefully I can maintain that and continue to grow.”

Similar to the Blue Raider invite, Streisel saved her best for last at the Penn Relays, winning the title on her final throw.  She was in fifth, trailing eventual second-place finisher Maria Jimmenez of Vineland, N.J., after her first three attempts in the preliminaries.

After unleashing her gold-medal effort, she watched as Jimmenez came within five inches on her final throw.

Tamaqua throws coach John Kotchmar feld Streisel was ready for a career best. But he did notice a recent trend at the meet that has prevented her from reaching her full potential.

Streisel's standard approach to the javelin is to use her speed down the runway and then let it rip. When it didn’t prove successful in the prelims at the Penn Relays, she resorted to the crossover technique in the finals.

With her lack of utilizing the crossovers on a consistent basis, she often came up well short of the foul line. On her winning heave, she was nearly five feet before the line.

“I don’t really have a mark when I do my crossovers because I usually do a full approach,” she said. “I kind of just winged it on that. I just don’t want to foul. I don’t want a throw not to count because of a foul.”

Streisel and Kotchmar believe a throw in the 170-foot range is a possibility. Catching the overall leader in the event, could be a different story. 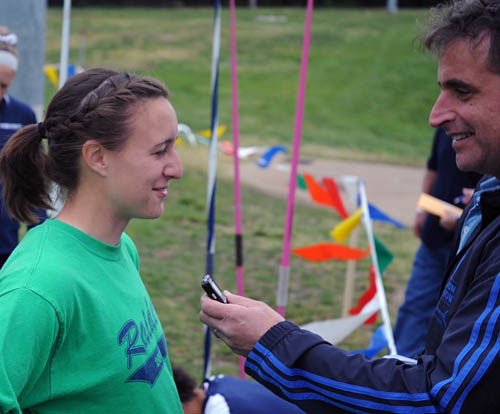 That position belongs to Haley Crouser of Greshman, Ore., who recently broke the high school mark with a remarkable toss of 181-2 at the Aloha Relays in her home state on April 13. Streisel is a good friend of Crouser, having met her last year at a prestigious throwers camp in Chapel Hill, N.C., known as Project Klutan Keihas. The National Scholastic Sports Foundation-funded program attracts the best throwers from the U.S. and Finland. This summer the two athletes will be making the trip to Finland for the elite camp.

Crouser appears to be a shoo-in for a national title with everyone else, including Streisel, fighting for that second spot.

Streisel feels anything is possible, but her overall plan isn’t necessarily to catch her friendly rival.

“I want to remain where I am at and I want to be consistent. I want to keep growing. The state record is on my mind, but we’ll work up to 160 first,” she said. “I think, right now, (Crouser) is a little too far to catch. I think over time, I have to gradually improve and to learn to be more consistent. Maybe one day (I’ll catch her). We’ll see.”