Photo and Story by Phil Grove

There should be no cause for alarm if air traffic controllers at Allegheny County Airport outside Pittsburgh pick up some UFOs on radar during the next few months. Chances are it will be an 800-gram javelin launched skyward – again and again – by the rushing right arm of South Park’s Billy Stanley.

Meet and school records have fallen victim to the Ohio State-bound standout already in 2012 as 200-foot throws are quickly becoming the early-season norm from Pennsylvania’s top returning javelinist.

“Your best throws just feel effortless,” Stanley said of the caliber of his tosses this year. “It’s when you don’t throw your best (that) you feel other strains on your body like you are trying to recover from not pulling through all the way or following through.” 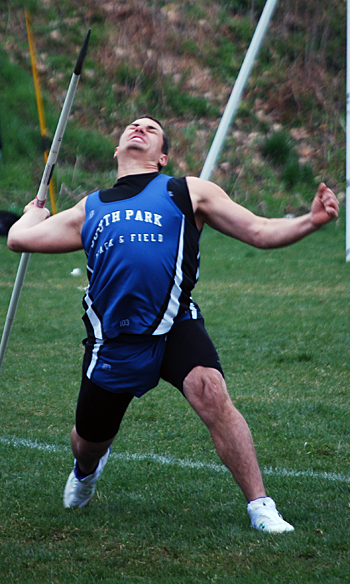 During the opening week of the season, Stanley didn’t feel many pains or strains. The Eagles’ home opener on March 28 against Bethel Park featured a series of throws that made history at the javelin-friendly school.

Stanley kicked off his season at 211-5, a mere inch shy of Chad Radgowski’s school record from 2005. He didn’t waste any time in covering the gap and then some with a 212-3 shot on his next throw before closing with a toss of 196-8 for a series average of almost 207 feet.

“It felt great to throw better than my PR from last year already this early in the season,” Stanley said. “My (second) throw everything felt perfect, and it went farther than my first throw.”

“The end of February when it started getting warmer is when I started throwing outside,” Stanley said. “Getting all the technique back again, and then getting in the rhythm of throwing. I had been training hard through the winter with medicine ball throws and lifting weights.

South Park throws coach Chuck Villa believes that Stanley’s extra work in the weight room will continue to pay dividends as he enters his comfort zone later in the year – warmer temperatures with all-weather runways.

“His technique is pretty close to being right where he needs to be,” Villa said. “He’s done a lot more strength training (because) he realized he had to.

“I think early on that’s why his throws are getting better because he’s able to hold his technique a lot better. And the fact that he just wants to go out and attack it. He attacks the javelin.  That makes a big difference.”

“He’s very coachable, he really is,” Hufnagel said of the former baseball standout. “With him throwing (in USATF meets) during the summer, he’s not done until July, and then we tell him nothing, nothing.

“Over the past two years, he’s been honest with us, saying, ‘I’m not doing anything.’ He does a lot of speed training in the offseason to work on his approach, and he’s gotten a lot stronger.”

“I don’t know if I’m stunned, but I’m very happy that it happened right now,” Hufnagel said of Stanley’s record-breaking start. “I think things are falling into place for Billy.”