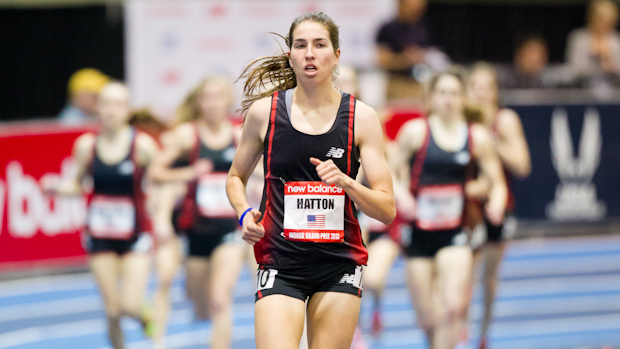 All she needed was one.

After two injury-plagued seasons, the Phillip Academy senior is making the most of that year at the Massachusetts’ prep school.

Hatton recently ran the all-time seventh best for the five-kilometer distance when she circled around the track at Princeton University in a winning time of 16 minutes, 14.99 seconds at the annual Larry Ellis Memorial Invitational. But the Stanford-bound harrier, who beat a bevy of strong collegians in the race, had her biggest shocker less than two months earlier.

Looking to run a time that would qualify her for the ‘B’ standard for the U.S. Olympic Trials in her inaugural 10K, Hatton cruised well under the 34-minute qualifier in a mixed race of male and female runners, winning the Snowflake Classic March 30 in her home state with an electrifying 33:17.28 clocking.

Since I hadn’t run a 10k before, I didn’t have high expectations going into the race,” Hatton said. “The plan was just to run 82 (seconds per 400 meters) for as long as possible. I was confident that I could reach the ‘B’ standard by some point in the season, but I had no idea I would run it in my first event!  I think I am still wrapping my head around the fact that it was the fastest-ever for someone my age – it just seems surreal.”

According to Hatton, everything just fell into place at the Snowflake, held in Medford, Mass.

I wasn’t really concerned about ‘racing’ per se, in that event,” she said. “I mean, it was more of an experiment than a competition. I didn’t care how many guys beat me. Around halfway, I was hitting 79s and still felt strong. I guess that’s when it crossed my mind that I could do it. I didn’t think much about it during the race or I certainly would have gotten distracted. With six laps left, I was feeling fatigued. But I knew from my splits at that point that I would make the (Trials’) cut. I didn’t get too excited about it immediately because I think I was shocked I ran so well early in the season.”

Hatton’s 2012 campaign started off positively on Valentine’s Day in Boston when she took the pace out hard and eventually finished second overall  to Haley Pierce in the junior girls’ mile at the New Balance Grand Prix  where she ran a personal-best of 4:51.37. She followed that effort in St. Louis by competing with some of the best collegian and open runners in the country at the U.S. Cross-Country Championships.

The race was won by Saucony’s Sara Hall, who edged 5K American outdoor record-holder Molly Huddle at the finish with both runners registering a time of 26:50.1 for the 8K race. Hatton placed a lucky 13th overall with a sensational time of 28:26.0.

(It) didn’t really surprise me,” she said. “That was my peak race of the cross-country season, and I felt prepared and strong going into the race.”

Hatton is particularly pleased at what she accomplished at Larry Ellis where she defeated Syracuse’s Lauren Perry by less than 10 meters. She felt that race has given her more motivation to excel as the season and year progresses.

The 10K gave me confidence in my physical ability, but, as I said, I didn’t really have to race,” she stated. “I could let the guys lead and settle into a rhythm. Going into the 5K, I wasn’t shooting for specific splits. I was just trying to compete. It’s hard to find competitive 5K races in high school, so I wanted to take the opportunity to practice racing strategy. In that respect, the 5K at Larry Ellis was a much more mentally-challenging event. I was really proud of the way that I negotiated the race, and especially the way I finished. The time wasn’t as impressive, and I didn’t feel as physically spent as I did after the 10K, but in certain ways it was a more fulfilling race.”

A swimmer during middle school and a soccer player until injuries halted that passion her sophomore year of high school, Hatton is treasuring her first true season of elite running. She has dreams of the Olympic Games, but also just enjoying being with her teammates at Phillips Academy.

I’m still in the process of sorting out my goals for the rest of the season,” she said. “If I can find another competitive 10K, I’d like to run it to try and improve on my time. It’s just very hard to find one on the east coast. I’ll probably end up running the 5K more since there are more opportunities to do so. I’d love to make the ‘B’ cut in the 5K as well. It’s hard to say for sure since I have done each event once, but I think I like the 5K better anyway. Even if the Trials don’t work out for me this year, I still have Junior Nationals to look forward to. In terms of the Andover team, the high school events are shorter, so I don’t really have concrete goals. I am just having fun with my teammates.”