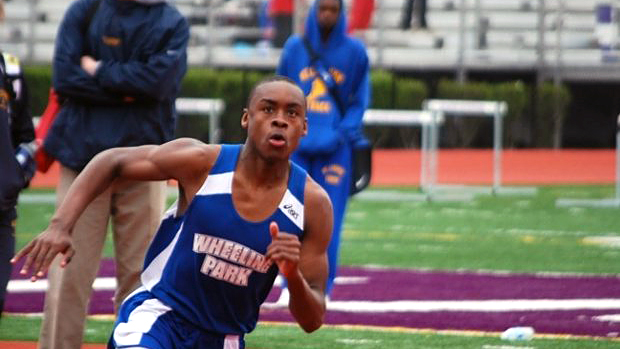 Baynes eyes up the bar on his approach.  (Photo by Phil Grove)


Errin Baynes sure knows how to make an entrance.


In less than two years, the Wheeling Park, WV multisport star has gone from high jump first-timer to prized recruit of the most decorated collegiate track and field program. And according to his coach, you most likely haven’t seen anything yet.


“He’s got some natural ability, but we really think he’s just untapped,” head coach Chris Daugherty said of Baynes, who has a pair of Class AAA high jump state titles along with the 2011 long jump crown. “His weight room is literally zero, so at the next level when they are training year round in the weight room, we think (that college) is going to get a great jumper.”


The 6-foot-2 senior wasted little time in getting airborne in his 2012 debut at last Saturday’s South Hills Classic outside Pittsburgh. He entered the competition at 5 feet, 10 inches, passed 6-0 and then soared over 6-2 and 6-4 before setting meet records at 6-7 and then US#6 6-10. His only misses of the day came at 7-0.


“I had to jump 6-7 to send my information to Penn Relays,” Baynes said of his goal of competing in the country’s most-celebrated track meet later this month. “After I won at 6-4, I chose 6-7 just in case I couldn’t jump any higher.


“My 6-10 jump, I was pretty high over it and it felt really good. I was surprised, that without practice, without steps and my first time jumping since last summer, that I was able to jump so well.”


His season-opening effort came on the heels of a break from training so he could recover from patellar tendinitis. The injury grew worse during an all-state basketball season that came right after a standout soccer campaign that saw Baynes named West Virginia’s top midfielder.


“The doctors said (he needed) about two weeks off to get healthy,” Daugherty said. “The (soccer and basketball) coaches didn’t want to give him two weeks off, so as a track coach, take two weeks off and get healthy so you can do the best that you can this year. Obviously, that was a great opening day.”


Saturday’s eye-opening performance was not the first time Baynes has created some high jump magic. Traveling to the Wildcat Premier invitational outside Columbus, Ohio, in early 2010, the Patriots were in need of a high jumper when one of Baynes’ teammates failed to make the trip. Daugherty agreed to the then long sprinter’s request to add the field event to his sprint relay and 400-meter dash assignments. 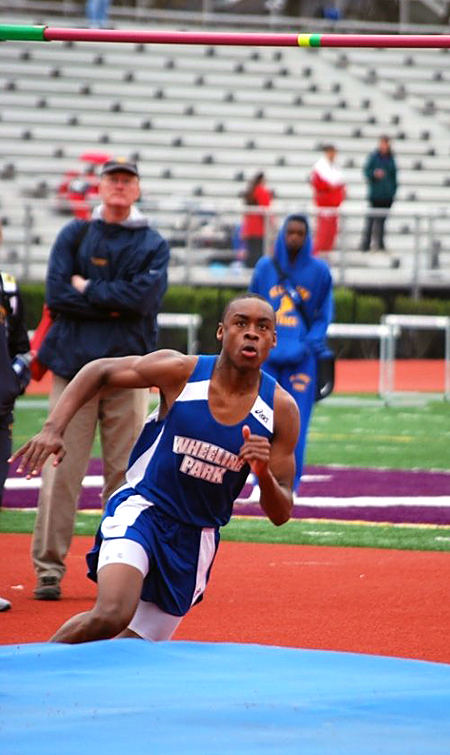 “I said I’ll let you do it because most kids today say, if I’m not ready don’t stick me in competition like this,” the coach said of the meet that featured Cleveland St. Ignatius and other Ohio sports powerhouses. “I said just go over and see what you can do. He used a different spot on every jump because he had never done high jump.


Success continued in 2010 for the high jump prodigy as Baynes began to gather as much information and knowledge about the event as he could. His sophomore season ended with a 6-10 clearance at Laidley Field in Charleston for his first state championship.


“When I went to a summer camp and worked with (Olympic medalist) Hollis Conway, he taught me a lot of things,” Baynes said. “I have a lot of bad habits because we actually don’t have a high jump-specific coach, so what I learned is from Youtube videos (and instructional tapes). I pick up some bad habits because there is no one there to correct them. I’m still learning the event.”


At last year’s Mars Invitational in Pennsylvania, Baynes excelled when the spotlight was thrust upon him as the meet wound to a close. Leading the crowd in rhythmic clapping, he slipped over a meet record and career-best 7-0.25 that placed him as the No. 2 jumper in the country for 2011.


“I definitely like the Mars environment a lot better, it gets me going,” he said of having a crowd watching you perform. “It gets you pumped up. It’s a lot of fun. No one really knew I was jumping (at South Hills). I definitely prefer people to be there, slow clapping, getting everyone involved. It’s a lot of fun.”


After defending his state title and tying for seventh at 6-8 in the 2011 New Balance Outdoor Nationals, Baynes turned his attention to narrowing down his opportunities to compete collegiately. With a new PR over 7 feet, he had many places to turn.
“At first, I was all over the place,” he said. “I was just like a kid in a candy store. I could go here, I could go there.”


His short list included Kansas State, Maryland and Southern Cal. After taking official visits to each, Baynes decided on Ron Allice’s Trojans, who have accumulated 29 NCAA team titles and more than 1,000 All-Americans over the years.
“I loved everything about it,” Baynes said of USC. “From the academics to the athletics to the city, the weather …  it was just a really nice place.”


Baynes’ coach noted that the 2012 season will include specific workouts to get the flopper ready for the Penn Relays, the West Virginia state meet in May and competitions much further down the road.


“Our state record is 7-3, and that’s a big goal of his this year,” the coach said of the jump in 1998 by Elkins’ Nathan Fields. “He is a good self-motivator with setting goals and trying to go after those goals, but we did talk a lot about having some mock meets at practice where we plan there are multiple jumpers capable of jumping what he’s jumped.


Baynes is hopeful that these workouts help him reach an even greater goal.


“If I can go to a meet and represent the United States, that’s the ultimate goal,” he said. “Just to have USA on my chest.”