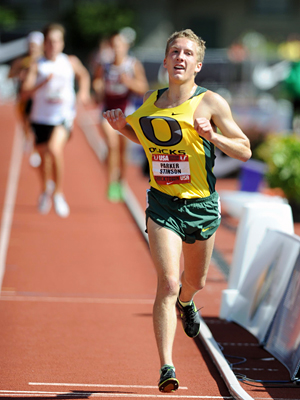 All Photos by Don Rich

Parker Stinson (photo left) of the University of Oregon defended his championship in the 10K with a dominating victory late in the race.  Johnny Sanchez led in the early going  taking the field through the 800M in 2:39 and he continued to lead the field through a series of  lap times of 74, 77.3 & 77.2.   During the early going  Sanchez was followed by a pack of eight runners, which included Alex Monroe, Parker Stinson, Heath Reedy, Will Nation, Conner Peloquin & Andrew Palmer.    Heath Ready of Long Beach State assumed  the lead shortly after the thirteen minute mark  but the pace remained essentially the same and even with  eleven laps to go the race remained wide open as far as fans could see.

Reedy soon picked up the pace and ran times of  74, 75 & 74 which Monroe followed as Conner Peloquin moved into third.  Stinson, who had been gliding along through the last few laps moved into the lead and he hit the accelerator upping the ante  to the tune of 68 second lap.   Parker followed that with a brisk 66.8, which effectively broke up the  chase pack:   the crowd of nine had become a pack of five plus a chaser.

Once in the lead the Oregon U. runner did not let up and laps of 66 & 68 limited the challengers to just two:   Alex Monroe & Heath Reedy.   Once the gap opened it did not close and Stinson won with a time of 30:32.77.   Placing behind him were Alex Monroe (30:29) & heath Reedy (30:31).   Will Nation of Texas finished fourth in 30:49 and Conner Peloquin , now running for BYU & formerly of Gig Harbor High, took fifth in a PR of 30:58.   Johnny Sanchez earned  sixth & was followed by  Andrew Palmer, while Danny Nicholls of Oklahoma claimed eighth in 31:22.   Jeremy Brummitt & Zachary Grese rounded out the top ten.

The Junior  men’s Hammer Throw saw a virtuoso performance  by Alec Faldermeyer of UCLA, who had a number of throws over 230.  He saved his best for last  and unleashed the metal a distance of  73.52 or  241-03, which easily claimed the title.   Placing second in the event was Oregon City High School recent graduate Greg Skipper, who threw 67.23 (220-07). 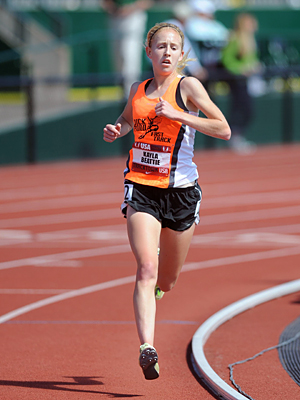 Kayla Beattie (photo right) ran an impressive time of 16:29.92 to win the women’s 5K on Friday by almost half a minute.   Taylor Crosson placed second in a time of  16:57 to lead her Virginia Tech team mate Courtney Dobbs, who finished a second later, across the finish line.    Rosa Moriello earned fourth in 17:10 and Rebekah Winterton followed  with 17:19.   Ohio Wesleyan’s Cara DeAngelis was clocked in 17:20 for sixth, while Audrey Urlander of Idaho State secured seventh.   Jami Bethea of Kodiak, Alaska  capped her senior campaign by securing eighth place in a time of 17:24.   Emily Pifer of Ohio University and Heidi Peterson of North Dakota State rounded out the top ten. 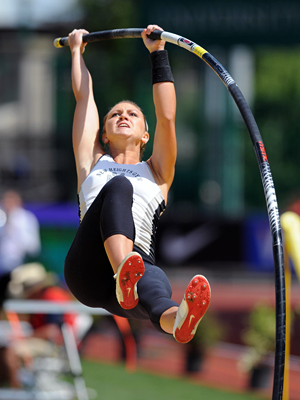 The young women’s Pole Vault competition was very close and at the end there was very little  difference between first & fourth place, when it came to marks.   Morgan LeLeux (photo left) went 13-7.25 and with fewer misses was credited with the victory.   Sandi Morris  of North Carolina cleared the same  height and earned second on misses.  Placing third with a height 13-3.5 was Stephanie Richartz of Illinois but Kortney Ross of  Oregon barely missed the awards podium after clearing 12-11.5.

The Men’s High Jump action saw Edward Dudley of Lake Erie College win the event with a leap of 2.20M.  Second and third went to Maalik Reynolds and  David Smith, who both cleared 2.17 but were differentiated by their misses.

In the Shot Put for men Kyle McKelvey was victorious with a mark of 19.19.   U. Georgia’s Caleb Whitener followed with 19.06, while Stanford ’s Jeremy Hines threw 18.86 to take third.  Nicholas Scarvellis, a recent graduate of Dos Pueblos Senior High in Galeto, CA, was right behind in fourth with an effort of 18.48.

When races are run in heats, there is always a concern that a runner will have a bit of bad luck and end up in a heat that is a good deal faster than the other.  Such was the case in the Jr. Women’s 1500, where Cory McGee of the University of Florida led a parade of runners with her time of 4:25.90.  In spite of her swift time, Aubre Worden finished right behind her with 4:26.37.  Nikki Hiltz claimed third only 1 hundreth of a second later, yet they were barely ahead of Juliane Aurso.  Oregon’s Paige Rice ran 4:39 in that heat and was one of a number of runners who may have fared better given different placement.  One runner who seemed unfazed by circumstances was Alexis Fuller, an 8th grader who will attend Union High School in Vancouver, WA, next fall.  Alexis ran 4:45.26--an excellent time for a middle school runner.  Paige Kouba of South Eugene ran 4:45.

Mary Cain won the second heat with a time of 4:30.19 and was chased across the line by Molly McNamara who had a time of 4:31.87.  Brook Handler placed third with 4:32.50 while Kathryn Fanning became the final qualifier from the heat after her time of 4:34.46.  Lisa Girard of Clemson placed fifth with 4:37 and just missed qualifying.  Ahley Maton of Summit High School in Bend, OR, ran 4:44 to garner 9th.

It should be interesting if action in the heats has an impact on Saturday’s final.