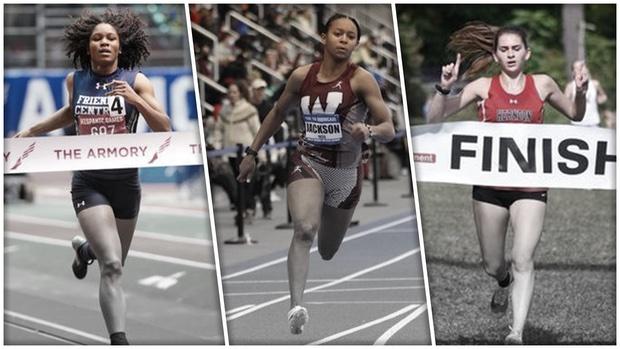 * Avery Lewis, Shawnti Jackson and Gillian Bushee are three athletes to watch at The VA Showcase this weekend

The January meet we've all been waiting for will finally take place at the Virginia Beach Sports Center starting on Friday.

The VA Showcase will host nearly 3,000 athletes from all over the country. Like in year's past, this has become one of the indoor season's highest-profile meets.

The boys and girls entries will showcase many of the nation's best throwers, jumpers, sprinters and distance runners.

Check out the top storylines and girls to watch going into this prestigious meet.

* On the January 10th episode of On the Line, Cory, Ashley and Olivia discuss the top storylines for the VA Showcase

Micayah Holland, Montverde Academy (FL): The Texas signee found her stride during a junior season that pushed her toward becoming one of the top sprinters in the country. The adidas Track Nationals champion and the Nike Indoor Nationals runner-up in the 60m will look to capture victory in the 55m and 200m.

Shawnti Jackson, South Granville (NC): The No. 2 all-time performer in the 300m and the defending champion in this event will look to repeat her performance. The Arkansas signee will also compete in the 500m for the third time in her high school career. She enters the meet with personal bests of 36.95 and 1:13.04.

Madison Whyte, Heritage Newport News (VA): At the Liberty Premier Invitational last weekend, Whyte clocked the No. 4 all-time performance in the 300m with a 37.17. The Southern California recruit also clocked a season-best of 6.96 in the 55m last weekend. From just about 40 miles from her high school, Whyte will line up in both sprint events and contest for the titles.

Akala Garrett, Albemarle (NC): The World U20 champion in the 400mH will test her speed and endurance in the 55mH and 500m. The U.S. No. 1 performer in the 55mH enters the meet with a season-best of 7.89, which is just one-hundredth of a second off her lifetime best.

Sophia Gorriaran, Moses Brown School (RI): Gorriaran is the best middle-distance runner in the country now. And she's no amateur when it comes to competing at the VA Showcase -- we've seen her set all-time marks at this meet over the last two years. This weekend, she will line up in the 500m and the 800m, where she currently has U.S. No. 1 performances of 1:11.45 and 2:02.27.

Gillian Bushee, Herndon (VA): The VHSL state champion and the 24th-place finisher at the Champs Sports Nationals Championships has the opportunity to become a double champion in the mile and two-mile. Last season, she set personal bests at these distances at New Balance Nationals Indoor with times of 4:54 and 10:19, respectively.

Avery Lewis, Friends' Central (PA): MileSplit's No. 3 recruit for the Class of 2024 has set all-time marks in the jumps throughout her high school career. Last year she claimed a mark of 21-2.5 to win adidas Track Nationals with a No. 6 all-time jump. The New Balance Nationals Indoor champion in the 60m will have a packed weekend as she will be all over the place. Catch her in the 55m, 200m and long jump.

* On the January 3rd episode of On The Line, Cory, Ashley and Olivia discuss and breakdown what could potentially happen in the girls Invitational 500m this weekend at the VA Showcase

Well, we will just have to see on Saturday as the girls Invitational 500m is shaping up to be one of the most anticipated races of the weekend.

Sophia Gorriaran of Moses Brown School (RI) has the fastest personal best time at the distance, as she clocked 1:11.26 last year to finish second overall. Shawnti Jackson, the national record holder in the 60m, showed her strength at the JDL Holiday Invitational last year where she clocked a time of 1:13.04.

The wildcards in this race will be the CARIFTA Games veteran Michelle Smith and the World U20 400mH champion Akala Garrett, both of which have proved to be threats at the distance.

However, Sandy Creek (GA) senior Isis Symone Grant, an Oklahoma State recruit, will also be in the mix -- although she will be entered in the second-fastest heat. So far this year she ran 57.61 in the 400m and 1:30 in the 600m.

Performance: First in the Invitational 1K

We're throwing it back to 2022: In one of the more thrilling races of the weekend, Sophia Gorriaran of Moses Brown School (RI) faced off against Roisin Willis of Stevens Point (WI) in the 1K.

This race had the crowd on its feet as there was a battle all the way to the finish.

On The Line: Breaking Down The Loaded Girls 500m In VA

Will This Become The Greatest Race In HS History?

National Record Watch At The VA Showcase: The Mixed 4x400m