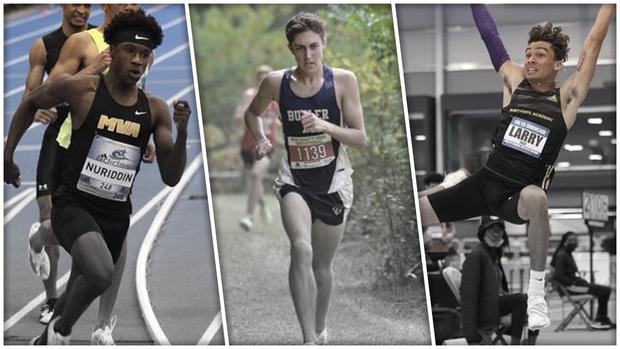 * Zyaire Nuriddin, Drew Griffith and Micah Larry are a handful of the favorites to compete this weekend at the VA Showcase

The time has finally come.

The VA Showcase, one of the indoor season's highest-profile meets, will host nearly 3,000 athletes starting on Friday at the Virginia Beach Sports Center.

As the meet founder Nolan Jez often says, it's the meet "where national records" happen.

This installment will once again feature the nation's top athletes, who will come in from all over the country to compete for top billing -- and perhaps state and national records, too.

The boys and girls entries are completely stacked across all disciplines and events.

What should you look out for? Look below to read about the top storylines and athletes to watch going into this prestigious meet.

* On the January 3rd episode of On the Line, Cory, Ashley and Olivia discuss the top boy and girls athletes to watch ahead of the VA Showcase

Zyaire Nuriddin, Montverde Academy (FL): Last indoor season Nuriddin clocked the No. 3 all-time performance in the 400m with a time 46.04 seconds to win at adidas Track Nationals. Weeks later, at the Florida Relays, he clocked a time of 45.78 seconds, becoming the eighth-boy from Florida to dip under 46 seconds in the quarter. This weekend, the Tennessee recruit is scheduled to run in the 300m and 500m.

Mekhi Gammons, Hilaeah-Miami Lakes (FL): The runner-up at the AAU Junior Olympic Games in the 400m finished third in both the 300m and 500m at last year's VA Showcase. The Georgia signee set personal bests of 34.40 and 1:05.13, respectively, and will look to improve on both those marks this year.

Nyckoles Harbor, Archbishop Carroll (DC): The five-star football recruit will debut in one of the biggest meets of the winter season. The No. 5 all-time performer in the 200m with a 20.79 will focus on the 300m and will run on Archbishop Carroll's 4x200m.

Tinoda Matsatsa, St. Andrews Episcopal (MD): Matsatsa, a recent AAU Junior Olympic Games champion in the 800m, has built up quite the resume. Even though the indoor season just kicked off, Matsatsa has set a personal best in the mile with a 4:15.25. He's also run 1:51 in the 800m. He will line up in the 1K and the mile in Virginia.

Drew Griffith, Butler (PA): The junior is coming off a strong cross country season, as he finished second at the PIAA State Championships and eighth at the Champs Sports National Championships. This weekend, Griffith will debut in the 3,200m. Last spring, he set a new personal best in this distance with a 9:04 to finish fourth at the PIAA Outdoor Track and Field Championships.

Micah Larry, Montverde Academy (FL): MileSplit's No. 1 recruit for the Class of 2023 is entered in the 55m and long jump. The seventh-place finisher in the 55m at this meet last year later finished fifth at the adidas Track Nationals in the 60m with a 6.85. But he's also the VA the defending champion in the long jump and enters the meet with a personal best of 24-2.5, which he claimed at Nike Indoor Nationals last March.

Drew Dillard, Archbishop Carroll (DC): Dillard has an opportunity to improve on his performances in the high and triple jumps. He enters the competition as the top returner in both events after his 6-6 clearance and his leap of 44-4. He enters with indoor personal bests of 6-7 and 47-5, respectively.

Rodney Lora, Woodberry Forests (VA): Lora is the defending shot put VISAA champion who finished 14th at New Balance Nationals Indoor in 2022. This season, Lora has thrown 59-6.5, which currently ranks him at U.S. No. 5.

The boys 300m invitational is loaded.

And one of the favorites to watch has to be the event's the top returner, Mekhi Gammons.

The senior from Hialeah-Miami Lakes (FL) finished fourth last year with a new lifetime best of 34.40. Gammons will toe the line with home-state competitor Zyaire Nuriddin, who finished sixth last year in this event with a 34.57.

Since then, the Montverde Academy (FL) senior put together an all-time performance in the 400m at the adidas Track Nationals, clocking a time of 46.04 to move up to No. 3 all-time in high school history.

Bullis School's (MD) Quincy Wilson, the freshman who broke the 14-year-old AAU Junior Olympic Games record of 47.59 this summer, will race the 300m for the first time in his career, too.

With his experience in longer sprints and expertise in facing national competition, Wilson can be a real contender for the title. This year alone, he's clocked a 1:04 in the 500m and a two-flat in the 800m.

But don't count out the Cuthbertson (NC) teammates and UNC signees Reece Morgan and Killian Fahy, either. Both can add some pressure to this competition.

Who wins the boys' 300m Invitational title at the VA Showcase?

Performance: First in the Invitational 500

Last year, Will Sumner put together one of the best performances in the event's history.

For The Record: This Cuthbertson Spring Duo Is ready To Roll