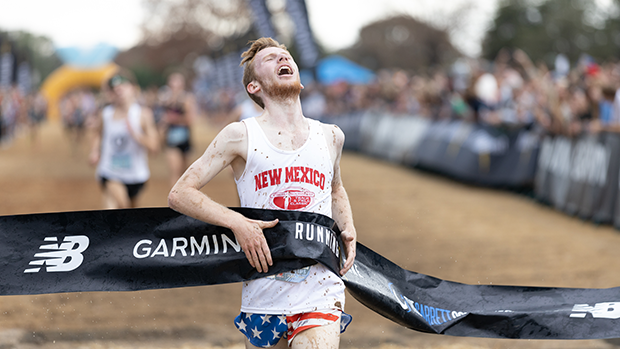 HUNTSVILLE, Ala. -- Ten minutes into the last high school race of his high school career on Saturday, Steven West felt it again. The energy spike.

How familiar was it? Just two weeks prior, in Phoenix during a regional championship, this same rush coursed through his body, though he couldn't place it, nor could he understand how to utilize it, this quasi-adrenaline.

That day finished bittersweet. He came up oh-so-shy of his intended target, a few places outside national qualifying, 17 or so seconds away from matching his personal record for 5,000 meters.

West reassured himself that he wouldn't let it go to waste again.

So there he was, 10 minutes into the Garmin RunningLane XC Championships at John Hunt Park, in the boys gold championship race, racing alongside the leaders. He felt the energy spike.

What West was feeling was the rush of oxygen at sea level. The Albuquerque, New Mexico native hailed from 5,300 feet of elevation, and trained around the city's roads, trails and tracks.

Capturing the biggest win of his career on Saturday, he claimed the boys championship despite torrid course conditions, earning a coveted national title, the ensuing championship belt and ring, and the pride that comes with returning home as a title-holder. West crossed the line first in 15:09.30.

"It's massive," he said. "Yeah, wow. National meet. I would have never imagined this would have happened."

West, an uncommitted senior, hadn't intended to begin his day as a title-seeker.

The Albuquerque Sandia High School senior modeled his race in a progressive fashion, hoping that each ensuing kilometer would get faster.

"Putting it down is a struggle. Giving it all is the most struggle you can ever do."

"In general, it was just keep getting faster, keep trying hard so at the line, like all of me is at the line," he said.

But as the final race approached on Saturday, nine previous sections muddying up the course and making it irreparable, West found himself in an opportune moment.

Athletes were changing their race places. Some ran more conservative.

West was tough, then poised.

He answered a fast first mile, clocking 4:43.80 over the first split, good enough for eighth place. And then came pockets of adversity coupled with loose and fast sections, a series of rolling hills and long straightaways.

West surged. He hit the two-mile split just over 9:40 and found himself in second.

"Right after the two mile, it was the other guy and me," West said. "This other guy zoomed. I had to go with him. That was the big move. Then, I just kept getting faster. I kept grimacing more. I got to give it my all."

With just over 1,000 meters left, West put down a final move that left the field in his wake, hammering into the downhill, his teeth clenching. He didn't leave anything as he crossed the finish line.

"Putting it down is a struggle," he said. "Giving it all is the most struggle you can ever do.

"Maximum effort, for sure," he added. "The entire last mile, I was just trying to get faster and faster to pull away.

While he was five seconds shy of a personal record, West would take the consolation.

"The win does make it worth it," he said.