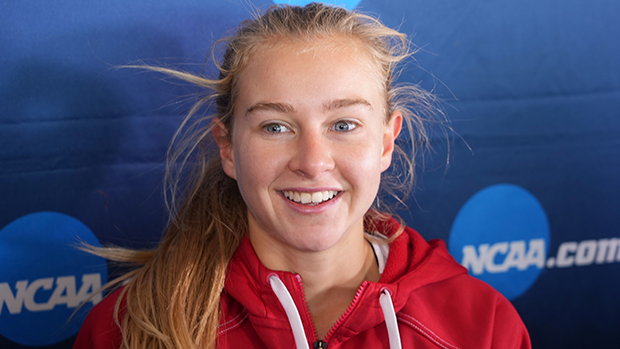 You almost knew, watching this NCAA women's cross country championship race as ESPN's drone footage hung overhead with less than 800 meters left, that Katelyn Tuohy had this thing in the bag.

You knew it because you had seen this situation play out before, over her four years in high school at North Rockland, where she had demoralized her competition across three national high school championships, and because she closed out her prep career as the most successful female runner in history, racking up 150 wins across XC, indoor and outdoor track and field.

You knew it because she went undefeated in 2022 in cross country, and because after two prior NCAA Championships and two All-American finishes, she was ready to finally step up on this day.

You knew it  -- mostly, probably, definitely -- because she was ready.

And on Saturday, you may have seen the passing of the torch after Tuohy surged past Florida's previously undefeated Parker Valby with just over 90 seconds of running left -- that beautiful tracking shot showing the very instant when she took over -- before a downhill that saw her roll into the finish line with a new 6 kilometer course record of 19:27.7, helping NC State to a team title that saw the squad go 1-2-13-24-and-74.

It was Tuohy's Time.

This was a certain kind of perfection for Tuohy and for NC State because of that duality, because, as she would later say, it didn't take a linear path to the finish line. "We were able to come up on top when needed," she said.

Sure, the North Carolina State women had won every meet they entered this fall, but small intangibles changed, areas of improvement were covered, lineups were tweaked.

"Things don't have to be perfect to come away with the result you want," she said. "If things are good, you keep working with that. You don't have to have perfection to pull it off. We didn't necessarily have that today. When you score 1-2 in the team race, that leaves you a lot of room to have some things happen."

This was NC State's second straight NCAA team championship after winning in 2021. The Wolfpack did so with four new members of the top seven: Nevada Mareno, Brooke Rauber, Sydney Seymour and Gionna Quarzo.

Last November, she finished 15th overall at NCAAs, which was second on the team behind the sixth-place Chmiel. As a freshman in March of 2021 -- during an altered season caused by the pandemic -- Henes placed Tuohy in the championship race, her first in an NC State jersey during XC. She finished 24th.

Heading into Saturday, there were questions about Tuohy's hamstring. She swatted them away. "100 percent," she said.

This was as confident as she's ever been. During pre-meet coverage, Tuohy was asked about hill work. "Hills pay the bills," she said.

Perhaps she was cognizant.

On Saturday, as Valby raced ahead after the first mile, creating significant separation and an over 10 second gap, Tuohy showed her Diamond Hands. At 3K, she started to move. Then, at the 4K mark she turned it up.

"We talked about from 4K to 4,500m is very challenging," Henes said afterward. "We talked about measuring the effort in there, to make sure you had something left for the last K."

From that point forward, Tuohy was locked in toward Valby.

The Florida sophomore separated early, she said, because she had tripped slightly and also, "I was getting annoyed." But she also knew she had to go because of what lie ahead: A determined Tuohy in the final half mile.

"Just go for it," Valby said afterward. "That was my strategy. I knew I had to get a lead to have a chance."

Another fun quote by Valby directly following the race, "I had to shoot my shot."

Without Valby, who knows what would have happened here.

But there is no doubt that because of Valby, this may have been the most compelling NCAA women's championship race in history. Only NCAA historians may argue this fact.

Asked to be reflective of when she knew she had this race won, Tuohy didn't quite know.

"I was like, 'All right, it's another three minutes of running. You can do it,'" she said. "I think she (Valby) only had less than eight seconds at that point, maybe closer to five. I knew I could finish that last 200 pretty hard, especially since it was downhill."

Maybe she knew, she said, after the final turn.

"I caught her around the turn of the last hill," she said. "I tried to take it home from there."