But the facts are pretty clear: Eight out of the top 10 females of all-time in the high school ranks in the state are from either Nansemond River (Brandee Johnson, No. 1 all-time at 13.08), Western Branch (four inside the top 10) or Hampton High School -- four of them own performances in the top 50 of the 100mH all-time nationally, too.

And yet, it's been three years since the area has had a true superstar.

On Friday, that may have changed.

Future Oscar Smith High School freshman Shakayla Lavender exploded in the prelims of the 100mH, producing a Virginia No. 7 all-time, a U.S. No. 9 performance and the No. 2 effort ever out of an eighth-grade athlete. Lavender ran a leading wind-legal time of 13.65 seconds.

That was over a full second faster than her previous wind-legal best of 14.69 seconds, which came in 2020.

"After I walked off, I was like, 'I just did that,'" Lavender said after the prelims.

It immediately moved into the top 10 performances of all-time in Virginia.

Upon reflection, the Chesapeake native was already ready for her encore.

A few hours later she re-focused, zeroed in on her mission and capitalized off her moment, securing an even better performance. Lavender, who's been running the hurdles since she was 11, believed there was more pressure on her in the finals.

But after the first hurdle, she said it was smooth sailing.

One could have suspected a little bit of this success coming. Oscar Smith's High School track and field program, coached by Stan Holloway, has this success before: Holloway guided the state's all-time leader in the 110mH, Kurt Powdar, back in 2019.

In fact, Holloway had not one but two athletes secure top 10 marks in the state all-time -- Aaron Shirley grabbed the eighth-best performance in the 110mH back in 2019 (13.81).

But the crazy part?

For Lavender, though, that's just fine with her. This is the beginning of her journey.

"Just keep going," she said afterward. "Just keep doing it. And once it's done, it's done." 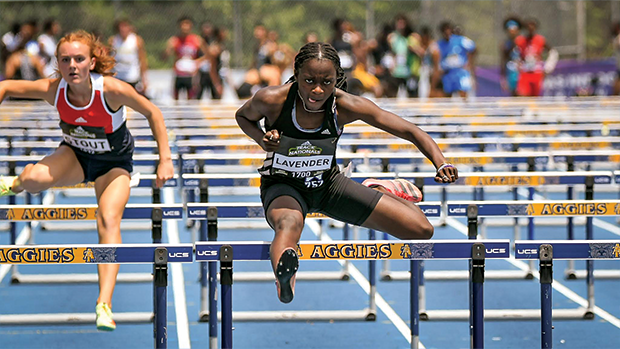