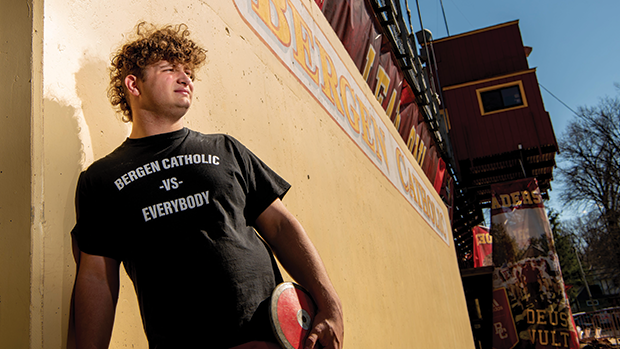 It's clear as day for anyone who's had a close eye on Benjamin Shue in 2022: He's a certified superstar in the making out of New Jersey.

The Bergen Catholic (NJ) High School freshman has simply been on another level this spring.

This weekend at the Eastern States Invitational in New York, he raised his freshman national class discus record to 193 feet, 8 inches.

That added eight inches to his previous best and is now part of three efforts over 190 feet for him this year at the discus -- the high school weight for the discus is 1.6 kg, compared to 2 kg for the international implement -- which means he's in the top 20 nationally for the event.

For throwing aficionados out there, that's monumental, particularly when you consider just how rare it is for high school freshmen to excel this early on across a career.

Just looking at Shue's statistics compared to all-time greats, you begin to see just why he's been on another playing field this season.

Historically, none of the all-time prep greats in the discus ever reached those heights so early on in their careers.

Of course, with modern coaching providing year-round instruction -- not to mention it being lengths ahead of where it was 10 to 20 years ago -- it's put Shue on the path toward something special.

Just how good has Shue, who's also an accomplished wrestler and football player, been in the discus this season comparative to his peers?

He's currently over 10 feet better than the-next-best discus thrower. Clovis North's (CA) McKay Madsen is No. 2 in the freshman class with a throw of 180-10.

Beyond that, though, we also have to keep in mind that Shue isn't a one-note thrower, either.

Right now he's also ranked No. 1 in the class for 2022 in the shot put, owning a mark of 60 feet, 8 inches. When we compare those marks to the same all-time discus throwers, Shue remains a special breed.

So just what comparisons could we make at this stage over his career? It's unfair to compare a young thrower to any former great -- after all, Shue is Shue. He turns 17 in September and will be 19 by the time his last outdoor track and field season begins in 2025.

But for argument's sake, there's a solid mirror here:

If we're looking at direct comparisons, it's hard not to see a little bit of Bryce Foster -- currently a starting guard on the Texas A&M University men's football team -- in the New Jersey thrower.

Strong, powerful and nimble with his feet, Shue has all the machinations of a versatile thrower with an ability to hit in the future over 200 feet in the discus and 70 feet in the shot put. That's exactly what Foster accomplished in 2021 -- he joined a club of just 13 others that season. While Shue's discus technique has fast-tracked right up the national rankings as a freshman, he's still behind Foster's all-time freshman mark of 64-0.5 (No. 2 in class history) and Morristown's Nick Vena's throw of 67-10.25, which still stands as a freshman national class record.

Of course, most importantly, there's still time to grow.

With success comes attention, too.

As the seasons begin follow Shue, the New Jersey star will ultimately have to combat with a realization that any burgeoning superstar has to endure: That outsized expectations will now be pressed against him, whether fair or not.

It's the acceptance that most young athletes with superior talent, and who succeed early, have to learn and ultimately work through.

But with his career fully ahead of him, Shue has done enough to prove he belongs with the best in 2022.

The New Jersey athlete will now get to decide the rest of his pathway in the years to come.