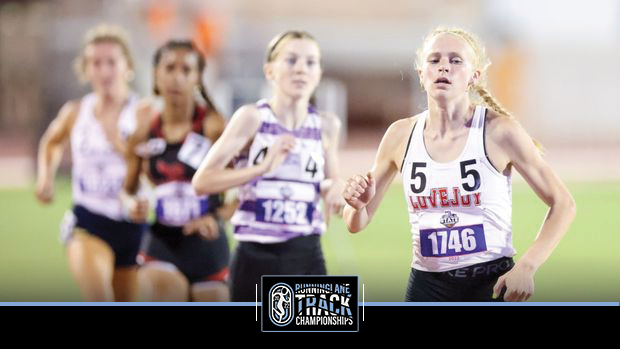 The RunningLane Track Championships are back for Year 2.

Get ready for an encore.

Set for May 27-28 at Milton Frank Stadium in Huntsville, Alabama, the distance gala will feature some of the top talent in the nation, and it will include athletes from 28 states and even a few individuals from Canada.

Featuring performances in the 800m, 1,600m and 3,200m, the event will take place under the lights and undoubtedly will play home to personal bests, possible state records and maybe even a class record or two.

Below, we highlight nine athletes you can't miss at this weekend's championships.

James Donahue is the superstar you're not talking about

The journey to improve has never stopped for Saxon Brown

Rendon Kuykendall is aiming for sub-9

Leath is on the cusp.

Thus far this spring, the high school junior has cracked 1:53 twice for 800m and is coming off his first AHSAA Class 7A title at the distance, clocking a time of 1:53.96.

There's reason to think he will be on the mark at RunningLane.

A year ago, he ran a career best time of 1:51.51 as a sophomore, winning in the final stages against the likes of Will Sumner, Brayden Packard and Brady Barton.

Perhaps he needs that same incentive a year later.

Across the entire 2022 calendar year -- including indoor performances -- he's posted six times under 1:54. With a fast field that includes Drew Costelow, Mac Conwell, Camden Law, Alec Jackson, Saxon Brown and others, we could see a new PR.

You want to know just how talented Littlefield is at 800m?

She became a two-time state champion in Texas this spring.

Undoubtedly, few are as better as the Texan from Lucas Lovejoy High School right now. She clocked her personal best time of 2:06.21 at the UIL Class 5A Championships in May -- a U.S. No. 6 time -- and it was her third straight effort under 2:09 and her fifth overall under 2:10 over the 2022 season.

On her career, Littlefield has seven performances under 2:10 for 800m. She finished eighth as a freshman at Brooks PR.

Littlefield currently owns the second-best sophomore time in the U.S., right behind Normal Community's (IL) Allison Ince, and ranks No. 21 all-time in the sophomore class.

The New Jersey standout is looking to pull the distance double. And he just may get there.

Will that be enough to knock down those PRs with spectacular showings? In the 3,200m, the Georgetown recruit will face Rocky Hansen, Wyatt Athey, Walker St. Johnn and Kevin Sanchez.

But it will be his first test at the distance on the season, after a recent effort of 4:07 in the mile at the Trials of Miles meet in New York City. Barna last ran the 3,200m in March, clocking a new personal record of 8:51.94 at the NJSIAA Meet of Champions.

A season ago, she ran her personal best time of 4:43.83 in the mile, hitting that time at the John Hay Distance Festival.

But with the national outdoor season just beginning, this could be the start of a productive run from Wennersten. If we're looking for indicators of potential, the New Jersey talent posted two mile efforts under 4:50 indoors and finished seventh at the distance at adidas Indoor Nationals.

Sanchez has been steadily climbing up the ranks this spring. And that may be just how he likes it.

That performance helped him to a Class 6A title.

The question now, then, might be just what Sanchez's intentions are? Is he simply looking to clock another PR? Or will Sanchez go after Texas' top time of 8:47.19, which Emmanuel Sgouros landed in April at the Acardia Invitational -- that performance by Sgouros, by the way, was a new state record.

In order to achieve that feat, Sanchez will have to run in uncomfortable territory. But with the likes of Barna, Wyatt Athey, Rocky Hansen and more, perhaps he'll have the talent to pace him there.

Can we get sub-4 from Donahue?

That will be the goal.

No one from Massachusetts has ever achieved that feat.

Then again, Donahue does have confidence on his side.

This indoor season, he ran 4:02 twice -- his best mark of 4:02.25 is the current indoor state record in the mile. Saturday's action will also jumpstart what could be a record-breaking postseason for Donahue.

Donahue has the capability of stepping up his game this weekend. Ultimately, that could yield some record-breaking marks.

Better yet, Zealand is the reigning girls mile champion at adidas Track Nationals, having producing a time of 4:51.78.

Here, she'll compete in both the mile and 3,200m, and one would think she'll be in the hunt for the win at both distances.

And she just be able to do it.

The Furman signee will certainly be fresh, having run just three races on the season, all of them outdoor 5Ks at the Trials of Miles, the Penn Relays and the Garden State Twilight 5K. Mulhern owns a U.S. No. 2 time of 16:07.50 at the distance -- that performance also stands at No. 12 all-time for a high school athlete.

Her targets in both the 3,200m and mile will be on speed, though, and in order to achieve those feats she'll have to put down her headiest performances of the 2022 season.

A last minute entry into the mile, the Newbury Park (CA) junior will be looking to break four minutes at the distance.

What an attempt it will be.

Right now, Young owns a career best time of 4:04.68 from March at the APU Meet of Champions. But his most recent performance was that of his incredible 5K at the Sound Running Meet, which saw him run the second-fastest 5K in history in 13:43.95. That moment came on May 7.

He'll have to dial the leg speed up. But the upside? He'll have James Donahue alongside him. Donahue produced two efforts of 4:02 over the indoor season.

What could also pace Young is the junior class record, which his brother Leo holds at 4:00.77.

Anything could happen on Saturday.