Dunbar High Coach Guy Thomas died early Tuesday after a month-long fight with COVID-19. You can read more here. MileSplit Associate Manager Cory Mull first met Thomas in 2015 while he was working in Fort Myers with The News-Press. Cory wrote this column following Thomas' death on Tuesday. He touches on his time getting to know Thomas, and the rapport they built over the last six years.

I was out on a run in Huntsville, Alabama back in May when my phone rang. I looked down at the Caller ID and saw a familiar name.

I remember it being hot. I remember the air sticking to my skin. The trees seemed to droop. When the phone rang, I was right in the middle of crossing the street; the cemetery didn't have a sidewalk.

But I didn't really think about the call. I was in town for a few days covering an event in nearby Madison and thought Guy, who was 51, might have known this and wanted to talk. Over the years, we had come to talk by virtue of a lot of things, but it was mostly through track and field. He followed performances from some of the country's top athletes; in fact, two of his own athletes, Leonard Mustari and Lucheyona Weaver, had become elite hurdlers nationally.

In 2020, his dreams went a little further, too: Dunbar started to lay ground on a brand new rubber track, courtesy of some budget from his county. The team ran on it for the first time in 2021. That same spring, his boys track team finished third at state.

Sometimes, we saw each other at meets. Sometimes we just texted our thoughts to one another.

But there was no doubt people were starting to notice his work. In 2020, he was given the opportunity to shadow the professional sprint group in Clermont led by newly-minted Olympian Noah Lyles, gold medalist Shaunae Miller-Uibo and others.

If nothing else, Guy learned there some very some top-level processes for professional athletes. And yet, he also took home bonds that stood long after he left.

And so, when the phone rang, I answered the call without hesitation. Because it was Guy Thomas.

Let's get to some background first.

Six years ago, I moved to Fort Myers, Florida, to become The News-Press' high school sports columnist. I was 30 years old.

The previous years of my life had seen me make pit stops at a handful of papers in Pennsylvania and Virginia, but Fort Myers represented the first big step in my career. I was ready for it.

Within five months, I was writing about the death of a legendary track and field coach Jeff Sommer. Tragically, all those years ago, the longtime head coach of Estero High School had died on the infield at the University of North Florida while coaching his girls 4x800 team to a state title.

He went into cardiac arrest. They won. He died.

It was an unbelievably sad story. The whole community was absolutely devastated over the news. But it was also during that time when I began to ingratiate myself with the community, and specifically with the parents and coaches and athletes of those within those track and field programs. I really started talking to them beyond the scope of that story.

I covered Sommer's death as much as I could. But I also started running with his former team more often. During those hot mornings, I met them on the track, at the parking garage at the nearby university, at the state park. I felt a connection with them that I couldn't look past.

That same September, I met Thomas for the first time covering one of his athletes, Seneca Milledge, and the following March I wrote a story on Milledge and his teammate Desmond Davis. In the same way that I felt this rapport with the Estero community, I immediately found the same respect for Thomas.

By then, I had known that Dunbar was battling a split perception. While it was a community inside Fort Myers that was plagued with issues of drugs and violence, it also had so much promise. So many good people were doing good things there. Thomas was one of them. He was an Exceptional Student Education teacher at the school.

The following November, I wrote another story on Thomas' team. He had led his boys to the Florida state cross country championships. Thomas said of his mission:

Dunbar didn't finish top three at state. In fact, the Tigers were 20th out of 25 teams. But in a lot of ways, that hardly mattered.

Thomas was giving them hope. A few months later, I accepted a position at FloSports and left for Austin, Texas.

I said my goodbyes. I remember reaching out to a lot of coaches. Thomas was one of the people I wanted to keep in touch with.

When I picked up the phone, I heard a different voice. Guy's wife, India, was on the other line. Immediately, my lights started flashing.

Yet again, I was in for some devastating news. India explained that Guy had been rushed to the hospital, having gone through serious complications with COVID-19. He was in critical care at that point. His organs were failing. His brain was swelling. She didn't know how long he had left.

I was wondering why she was even calling me. But then she said something that shocked me.

"Guy would have wanted me to call you," she said.

"He really admires everything MileSplit does for Florida and for his team and what you all do for track and field. I know he respects what you do and he would want you to know."

I tried to keep running after the call, but I almost broke down. Why Guy? Why was this person who was lifting up a community being punished?

It's in those moments when you tend to think a lot about memories. You remember all those perfect moments in your head. How that person could be gone in a few days. My brain went back to Dunbar. Those times I saw Guy leading his team through hurdle drills. His unbridled passion for track, and for fast times.

In recent months and years we had texted about national news, hurricanes in Florida, meets in Birmingham. The past year, I had been in Virginia to see his hurdlers win indoor national titles.

Of course, though, he was much more than a coach. I thought about Guy and fatherhood. About his wife and children. He had four. Death is this unshakable life event that changes everyone.

I couldn't imagine what he was going through. What India was dealing with.

That life can change so suddenly. 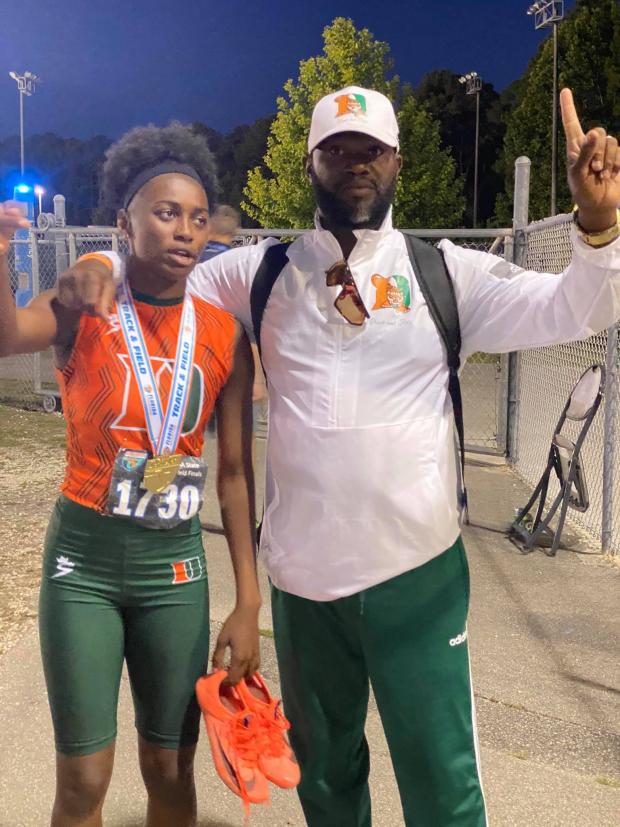 It's been a little over a month since that phone call.

Guy died Tuesday in that same hospital, presumably with family by his side.

His death has impacted his community greatly. Those who knew him best were offering prayers and words of support on Facebook and Twitter.

I did as well.

But I also couldn't help but think of another story we collaborated on in July of 2018.

We chatted for over an hour on the tragic death of a former athlete of his, Te'Niya Jones, who died while being swept out into a riptide in Tel Aviv -- she was a young student at the University of Kentucky who had dreams of trying out for the track team.

She had been in contact with Thomas on how to navigate that process. Thomas, like always, had encouraged her to dream and to work and to dedicate herself to that mission. He believed in her.

That she met a tragic death was even all that more devastating, because she lived life the right way.

So too had Guy.

What I remember most about that conversation, though, was how we started to form this friendship beyond track. He asked about my life, about stresses in my life or any good news.

Relationships are the lifeblood of any good journalist. But here, it felt like we were digging behind the surface of just being reporter and subject. I felt like I was getting to know the real Guy.

It's crazy how that works.

I'll never understand why this will have happened to him. He had lived a life in service of others. And for that work, he was being rewarded with incredible success on the track.

But for whatever reason, Guy wasn't gifted a longer life. I'll miss him. I'll keep his phone number, too. But I also know he'll always be remembered. I will never forget Guy.