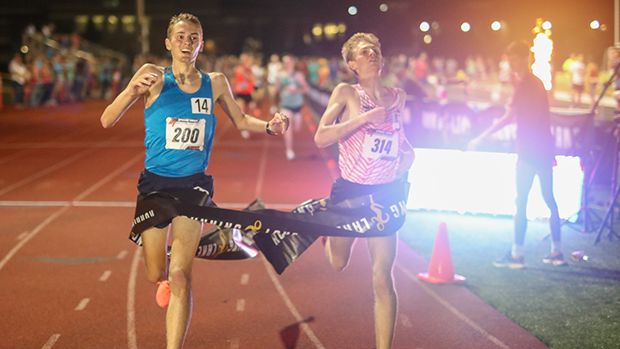 "I honestly did not envision this at all. I knew I could have a fighting chance for some of this. But I never thought I would get this close in the 2-mile and be the champion in the mile." MADISON, ALABAMA -- If you need to know the stats, here they are:

On Saturday at the RunningLane Track Championships at James Clemens High School, nine girls mile performances in the championship section finished inside the top 25 nationally for the 2021 season, including a U.S. No. 1 mark of 4:38.14 by Huntington North's Addie Wiley.

Another historic mark -- that 4:40.16 from Sadie Engelhardt -- went down as the fastest performance by a 14-year-old all-time ...in the world.

Comparably, no other meet in 2021 has had even close to that depth at the distance.

And so that should tell you something.

Mainly, it said this: Athletes weren't holding back this weekend.

And yet, it wasn't just the girls.

Hathaway Brown's Morgan Monesmith ran the fifth-fastest girls' 800m in 2:06.89, and the No. 4 junior performance overall -- remember, the top three girls in 2021 have all qualified for the U.S. Olympic Trials at the distance.

If there was one thing to take away from the final day of the RunningLane Track Championships, a first year event catered to athletes across the United States and held at the conclusion of the spring track and field season, it was that most athletes who traveled here under the pretense of running fast understood the stakes of racing this late in the season.

There was little point in running tactically. One look across any of the race fields in any of the sections led you to an obvious point: This wasn't a meet primarily of just Alabama athletes, or even that of the Southeast. It was a true national-caliber environment.

Four athletes from Canada competed. Another came from Hawaii. A selection of the best traveled from California, Texas, Indiana, Pennsylvania, Washington South Carolina, Iowa, Florida and many other states.

And so when the elite sections of the 800m kicked off early into the evening on Saturday, the stage was set.

The boys race saw a wild end-to-end affair that began with American Fork graduate Brayden Packard getting boxed in early, then slipping out by 200 meters and then going into fifth-gear by the 400 meter mark.

Afterward, he said it wasn't simply about going for the win ...or playing it safe.

"That's how racing goes," he said. "It just turned out how it turned out. I'm happy with it."

While he did most of the work through 700 meters, though, ultimately two non-seniors made their marks at the finish. "Especially after last weekend, after not having the race I wanted, and coming back today and boosting the confidence," he said.

Sumner, meanwhile -- a high school junior who had performed much of the season at 200m and 400m and who was coming off two back-to-back national-level performances at 400 meters in 47.01 seconds -- scored an incredible 3-second PR at 1:51.67.

Monesmith, meanwhile, did the boys one better.

The junior from Shaker Heights Hathaway Brown (OH) High School shook off a disappointing finish at state, where she finished second overall in Division I, and landed a US No. 5 performance of 2:06.89 at RunningLane.

But it didn't come easy.

After Chelsea's Cady McPhail laid the ground work in the first 400m, rolling though the first split in 61 seconds, Monesmith had considerable ground to make up.

The Ohio athlete had to eat into a nearly 10-meter gap.

But with 56-second quarter speed, that's precisely what she did with 300 meters left.

Perhaps Monesmith didn't want to finish her season with two straight losses. Up until the state championships on June 5, she had won seven straight races at the distance dating back to February, including an indoor state title in 2:10.86.

Her workouts, she said, had indicated she was in superior shape.

"It was really just about feeling good, and I didn't feel that at the state meet," she said. "I think I was really disappointed in second place and how I did in the mile. Coming here today, I wanted to run a fast time and go for the win."

Perhaps the race of the night -- and of the event, to be quite fair -- was the girls mile. Eleven entered with performances at 4:50 or faster, and a field of 18 athletes from 12 states all had hopes of breaking five.

Of course, few could have expected it to turn out the way that it did -- even though it went to plan early.

Unsurprisingly, Birmingham Seaholm's Audrey Dadamio did the work early. And while to some, that pressure would be a mountain all of its own, it never phased the Stanford recruit.

She pushed into a fast first lap in just over 70 seconds, then consistency reigned by the halfway mark, with the national-level runner hammering through in 2:20.

"I've gotten pretty used to taking control in races and in the indoor season I did it a lot, but especially the outdoor season," Dadamio said. " ...I'm definitely used to being in that position and usually I'm able to stay pretty calm and leave something for the last lap.

"I felt like I did (here), but it just wasn't enough today. I knew a lot of those girls were fast and I could feel the pressure of them on me ... I knew for sure Addie would be a factor in the last lap.

Already, though, signs were beginning to show that the result could be unexpected, with California eighth-grader Sadie Engelhardt and Huntington North's Addie Wiley close behind. Ohio senior Allison Johnson, who entered with the 11th-best time, never lost contact, either.

But it was Wiley, however, that ultimately would walk away with the nation's best time. Mounting a surge with about 250 meters left, she pressured Dadamio at the 200m mark and then passed her.

Engelhardt, who had been chasing all race long, followed suit.

"I knew it was a possibility coming in, but having it as a reality is just unreal," Wiley said.

But Engelhardt wouldn't walk away disappointed, either. The FAT time of 4:40.16 gave her a new 14-year-old world age group record, and it signaled a massive moment for the young star, who surpassed a record that had stood for 48 years by Mary Decker.

With one race left, the conclusion of the event was near.

But at that point, Harrison's Sully Shelton wasn't thinking about tactics.

A field that ultimately saw a smaller field by race time -- top seed Miles Ally was in attendance but opted against running -- saw Shelton going for it all alone up top.

"There was no point in me going out there and trying to run tactically," he said.

And so the North Carolina recruit simply went with the flow, trying his best to manage an effort closer to sub-4:05.

The third lap saw Shelton still in control as the field began to take shape around him -- but by then Woodlands Christian's Ben Shearer was beginning to close.

As Shelton felt fatigue in the final 100 and Shearer began to make his final ascent on the straightway, it wasn't the athlete who most expected who grabbed that pivotal finish.

But then again, this should be said:

It was a special weekend for Hartland's Riley Hough.

For all the hubbub that Michigan all-timer Hobbs Kessler received this year, it was Hough who beat the national record holder in the 1,500m over the fall.

The reigning Michigan state cross country champion -- who had beaten Kessler that fall on a time trial-type state title race -- was simple magical in that final lap, throwing down his most impressive split to date.

And it came a day after he had rolled to a second-place 3,200m performance on Friday.

With 50 meters left, Hough's long strides took over and overcame Shearer, powering him to a new personal record, and winning, time of 4:07.34.

It marked a 10-second improvement from his previous mile best, and roughly eight seconds better than his converted 1,600m time.

"I honestly did not envision this at all," he said. "I knew I could have a fighting chance for some of this. But I never thought I would get this close in the 2-mile and be the champion in the mile."