The attempt was never going to be easy.

No one in Georgia history had ever captured the distance triple.

And in the end, perhaps Sully Shelton didn't get exactly what he envisioned out of his last few high school races for Harrison High School at the GHSA Class 7A Track and Field Championships this weekend in Powder Springs, Georgia.

But he got darn near close.

Across three days, Shelton pocketed a state record in the 3,200m, his second win in the 1,600m and a runner-up performance in the 800m, only losing by less than a second to his teammate Parker Buchheit.

All in all, he had to leave satisfied.

Shelton had to combat Syracuse recruit Kamari Miller in the 3,200m. Both entered with times under 9-minutes for 3,200m. Each were looking to start things off with a flourish.

Both knew they would have to bring everything to the table in that first race.

Both Miller and Shelton ultimately did.

Through multiple moves and surges, Miller kept attacked Shelton in the first seven laps. Shelton, however, never let him go.

On Friday, both Miller and Shelton returned in the 1,600m (above).

Yet again, it was a battle up front, with Shelton taking the lead early before Miller grabbed it back again at 600m.

On Day 3, Shelton was hopeful for his last title.

But after Buchheit and Shelton went toe-to-toe in the first 700 meters, Shelton's teammate revved up in the final meters to take the victory in 1:53.95. Shelton was second in 1:54.24. 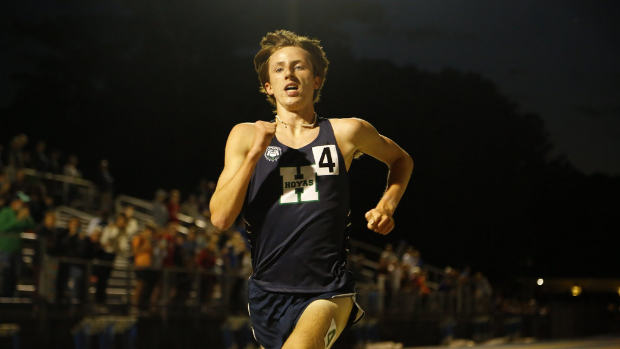