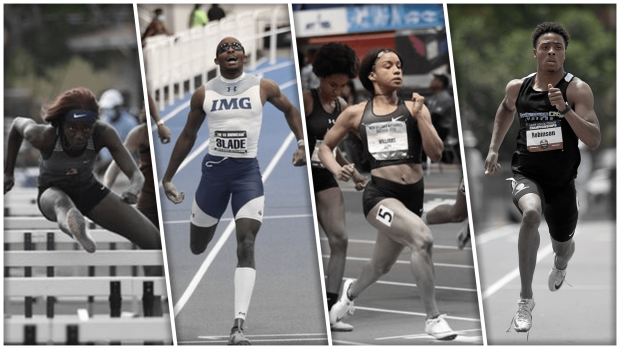 This weekend, the Miramar Invitational will feature a star-studded lineup featuring not only the nation's best professionals, but also some of the country's best U20 and high school athletes.

The meet, which is part of the World Athletics Continental Tour, is set to take place Saturday at the Ansin Sports Complex in Miramar, Florida.

Check out some of the biggest U20 names set to compete below. Slade is set to compete in the 200m dash against some of the world's best sprinters. The field features 2019 World Championship 400m bronze medalist Fred Kerley and Jamaican sprint star Akeem Bloomfield, both of whom have top five all-time NCAA 400m marks.

In February, Slade set the high school 200m indoor national record, running 20.62 in an all high school field in the fourth installment of the American Track League's indoor series. So far this outdoor season, Slade has run the 200m just once, but he holds the nation's fastest all-conditions mark in the event with his time of 20.27 (+2.5) seconds. He also holds a wind-aided effort of 10.23 seconds in the 100m.

And yet, this won't be Slade's first bout with the pros, as his 200m at The Florida International "Pro Addition" was against 2016 Olympian and 2015 100m World Championship bronze medalist Trayvon Bromell.

Bromell finished second to Slade at the Florida International "Pro Addition" meet in 20.29. So far this year, Frye has gone undefeated in the 100mH against high school competition.

Saturday's action will be Frye's first shot at a professional field. The senior and UNC signee posted a wind-aided personal best of 13.14 (+3.2) seconds this season. Frye also holds the top wind-legal high school 100mH performance with her 13.52 (+0.1) from the Dunbar Tigers Classic.

Like every athlete on this list, this could be a big opportunity for Frye to run a new PR. Just one year removed from Hazelwood West High School, Justin Robinson, 19, will compete against professionals in a loaded 400m field this weekend.

Robinson opted not to enroll at Arizona State in the fall -- he had signed with the Sun Devils during the National Letter of Intent period -- after making the decision to play it safe due to ongoing conditions surrounding competition.

So this will be Robinson's first big opportunity to challenge himself against athletes he will likely see at the U.S. Olympic Trials in June. The field consists of top names such as Will London, Quincy Hall, Michael Cherry, and Kahmari Montgomery.

This will be Robinson's first competition since August, when he competed at the American Track League Meet and ran 44.91 seconds, ending the year with the world lead at the distance. He beat Cherry by .07 seconds at that meet. Earlier this year, the 19-year-old, who graduated from Oakland Park High School this past year, raced the 60m dash at the New Balance Grand Prix. She ran a 7.22 in the first round to qualify for the finals but ended up not competing in the finals.

In Miramar -- Williams' home track -- she will face off against former high school national record holder, Candace Hill, a fellow sprint star who went pro out of high school. Hill also competed at the New Balance Grand Prix where she placed third.

Other big names in the field will be Jenna Prandini, Brittany Brown, Elanie Thompson, and many more talented 200m athletes.