The MileSplit50 No. 3 ranked Loudoun Valley boys of Virginia have been the shining stars from the region for the past two years. And the two-time defending Nike Cross Nationals winners are now hoping to defend their third straight national title in Portland, Oregon. The Vikings are the only program from the region to ever win a national team title. While a quality core of runners graduated from those two national championship squads, the depth of Loudoun Valley's program has it once again in the driver's seat as the region's best program and in contention for another national title this fall.

The Vikings' only loss of the season came on the same WakeMed course earlier this fall at the Great American Festival against No. 1 Great Oak of California. Loudoun Valley won't have a chance to get redemption against Great Oak until the national race in Portland, but first things first: They'll need to dispatch a list of challenging squads within the Southeast region. There was a significant buffer of 122 points between Loudoun Valley and the next closest squad at Great American. Loudoun Valley won NXR Southeast in 2018 by a margin of 65 points, putting down a team score of 52 points, a 15:29 team average and spread of 28 seconds.

Carlos Shultz leads the Virginia Class 4A state champions, who tallied an incredibly low team score of 17 points in their state meet race at Great Meadow. Shultz could possibly contend for the individual regional title at NXN Southeast. Earlier this season at Great American, he ran a 5K personal best of 14:55 to finish second in the Race of Champions.

You can look to the early October results at Great American to find the next best squads within the Southeast to attempt to challenge Loudoun Valley; more importantly, two teams secure two automatic nationally qualifier spots at regionals. Severna Park from Maryland, Western Albemarle from Virginia, and Satellite from Florida were the next highest finishing squads in the Great American's Race of Champions and have only gotten better since. Severna Park, which was fifth in the team standings at Great American (and second among Southeast teams), won another Maryland 4A state title in impressive fashion earlier this month on the very difficult 3 mile course at Hereford High School. A program that has qualified twice in the past as a team for Nike Cross Nationals (2013 & 2014), Severna Park put 5 runners in the top 15 and all at 16:31 on faster on a difficult course to win by a decisive margin of 87 points over a quality and possible top 10 caliber team in the entire region in Northwood.

The strength of this team, ranked No. 18 in the country by MileSplit, is their ability to pack it up as they have a solid No. 1 runner, but not a true front runner in Jake Gelfand -- he owns a 15:35 5K best. Only 15 seconds separates their fifth-fastest runner on the season. Severna Park finished fourth in last year's NXN Southeast Regional race and return four runners with experience from that meet. It is very possible that Virginia could be sending two teams to nationals as the state's Class 3A champions Western Albemarle are certainly right in the hunt coming off a historic state meet performance in which they posted a perfect score of 15 points -- only one individual from a non-scoring team broke up their pack. The squad finished sixth in the Race of Champions at Great American and is ranked as third-highest squad from the Southeast Region.

Western Albemarle has arguably the best 1-2 punch among the top contending teams in Jack Eliason (15:05 5K PR) and Joe Hawkes (15:27 5K PR). The squad is supported by a remaining lineup that has a total of six runners who have broken 16 minutes for 5K this season. 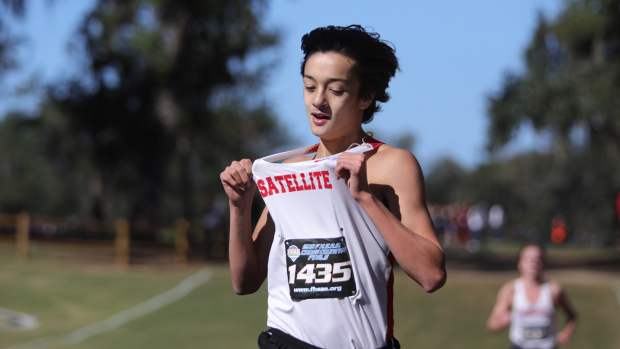 The state of Florida has been well represented historically with boys team qualifiers over recent years, including last year's Bolles squad. It appears the next program ready to send a team to Oregon from the Sunshine State are the Satellite boys, followed closely by Belen Jesuit.

Both teams won state titles this fall, with Satellite taking Class 2A and Belen Jesuit earning a win in Class 3A, but the merge told the larger story: Satellite won the day.

And that wasn't too surprising.

Satellite finished seventh at Great American and Belen Jesuit was 33 points behind them in eighth place. Satellite is looking to make a big jump from its 23rd-place finish in the 2018 NXN Southeast Regional, while Belen Jesuit was more in striking distance with a fifth place showing last November at WakeMed.

Belen Jesuit has experience making it to nationals, but none of their current members were part of the last team qualifiers back in 2011. Locally, Broughton leads the group of North Carolina schools hoping to make a splash among the top half of the field. Broughton won the 4A state title and seem to have improved drastically from the start of the season when they finished 6th at WakeMed in the adidas XC Challenge in mid-September. They had a 46 second spread for their top five at the state meet and have a 15:31 team average for the season bests of their top 5 runners. North Lincoln and Chapel Hill follow closely behind as the next best North Carolina schools in the meet.

On paper, the Huntsville squad from Alabama looks to be a fast team and won its state meet with a 15:44 team average. But the team had an incredibly disappointing performance at Great American--well back in the field, which leaves a question as to whether it's ready to perform at this level. Alabama team's have not historically done well at this meet, with no boys teams having advanced to nationals from the state since Nike Cross Nationals went to the regional meet qualifier meet.