LYNCHBURG, VIRGINIA--When the baton came in the final moments for Ashton Allen, the fast-rising 400 meter prospect from Bullis School in Potomac, Maryland, he wasn't so much thinking about the clock, or his hand placement, or his footwork.

All Allen knew in that moment was that he had to go.

And then it came, a new national record in the 4x400 at the third annual The VA Showcase on Friday in Lynchburg, Virginia, with Allen anchoring his team in a remarkable split of 46.5 seconds. He led the Bulldogs to a winning time of 3:12.53, which surpassed the former record of 3:13.06 last set by New Bern (NC) High School in 2009.

From the moment that Bullis School's first leg, senior Andre Turay, led from the gun, the lead built and then extended and then became inextricably more difficult to rein in.

No single leg had a bad day, with junior Ryan Willie laying down a consistent 48.5-second second leg, and junior Jay Pendarvis holding on for an even better 47.9-second performance in that crucial third position.

"I had so much confidence that I could do it," Allen said afterward.

In the beginning, though, nothing was guaranteed.

This team was still shaping up. It was still figuring itself out.

Outside of Allen, who ran a PR of 49.3 in the 400m last indoor season, every other member of the team had transferred in from another program. And then there was Andre, who in his own admission was the least likely athlete to be prominently featured on a team like this.

The former South Hagerstown (MD) athlete and Texas A & M signee hadn't run an open 400 since his freshman season in high school. In fact, he had barely gone over distance for much of his high school career, instead choosing to focus on the 55 meter hurdles over the indoor season.

But when he made the switch to Bullis under the guidance of coach Joe Lee, who specialized at the distance, he said he knew he was capable of much more.

"When I came here I knew I had an opportunity," Turay said.

After securing his trip to the 55mH finals earlier in the day, the senior was given the assignment of leading off for a potential national record attempt. Turay said afterward that he knew it was his chance to help this team achieve greater heights.

"We had a chance to do something special," he said.

Turay made sure to get out in the first 150 meters into the break, then took the inside position on Lane 1 and rolled on to the first exchange, handing off to his teammate after 49.45 seconds.

Ryan received the hand-off with much to gain.

The transfer from North County (MD) High School had always been talented, finishing third in the 300m at the Maryland Indoor State Championships in 2018 with a time of 35.78, but he hadn't quite made the leap just yet.

While Willie's goals after arriving at Bullis were to run fast, he also wanted to make an impression on this team.

"I just thought I needed to go out and do what I thought I could," he said. "We needed to continue to set the pace."

On the second exchange Friday, he made sure to do that, rolling with gusto over his particular leg with his best overall 400m split of 48.5 seconds.

Just as important, he said, was competing to the level of the team's aspirations.

"When we don't live up to our expectations, it feels we we lost a little part of who we are," he said.

Then it was Jay's turn.

In some ways, Pendarvis had the hardest job. He had to hold on to the lead, sure, but he also had to run fast enough to give his team a chance to break the record.

"My game plan was just to go out there and extent the lead as much as I could," he said. "I wasn't even thinking about time."

Like his two teammates before him, Pendarvis was a transfer from Annandale (MD) High School who was also looking for ways to fit in with his new team. Over the previous outdoor season, he had finished fourth at Virginia's Group 5A/6A Championships in the 200m, though he had won a title in the 400m with a time of 48.08.

Outside of Allen, he was probably the most accomplished athlete on this team at the distance, the one who gave Bullis another elite option.

So on Friday, while the moment's fuel added up, he didn't let the pressure get to him.

"The effort didn't feel hard because I knew this team could go fast and I was kind of going off of that feel," he said. "It was instinctual. I knew we had to break the national record, so I did everything possible to help us get there." 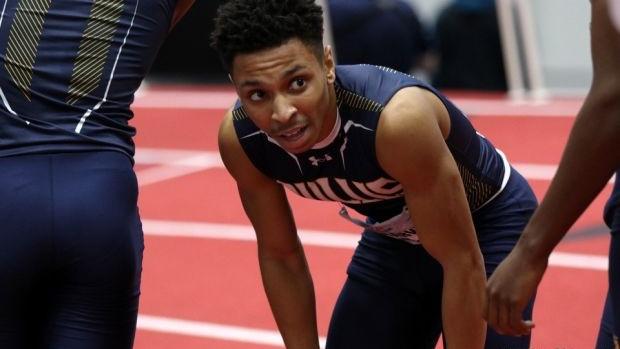 He threw down an incredible 47.9 second third leg, handing off to Ashton.

A day earlier on Thursday, Allen had spoken at a pre-meet press conference, saying that his goals were as high as they ever had been. Following in his brother Eric's footsteps, though, there was a sense that the younger Allen had to make his own path.

This was his chance.

Allen raced over his first lap without even thinking, and the lead grew to nearly 60 meters. Allen passed the 200m split and didn't look up at the clock. His arms raced, his legs churned, and with 50 meters to go, he said he began to feel the crowd.

It was then, he said, when he finally saw the numbers adding up.

Again he told himself, 'If I finish we'll get it."

Crossing the line, with the jubilance of a national record finally secured, all four members of the relay met again for one final send-off, this moment not too big for any one of them.

They met Lee for one final meeting, arms wrapped around one another. 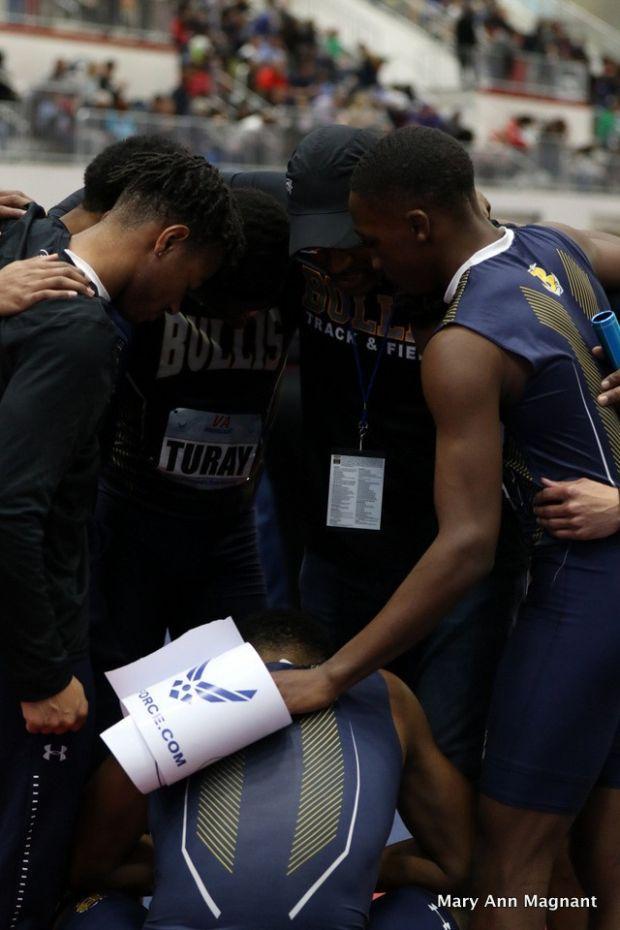