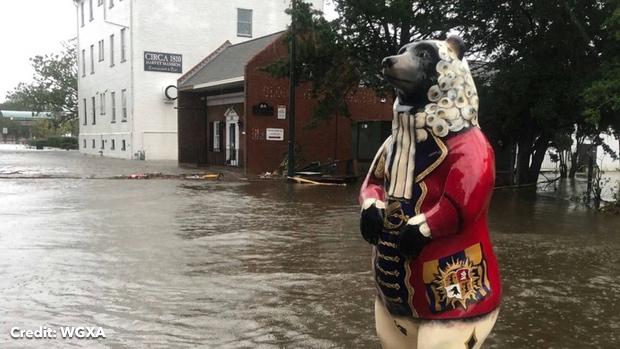 Monday marked the return to school for administrators, teachers and students at New Bern High School, a little less than a month after Hurricane Florence wreaked havoc on the small coastal town in North Carolina.

For a lot of reasons, it was a welcome retreat back to normalcy for everyone involved.

"It was a relief, it was a joy," said Mark Robinson, who is the head coach of the high school's cross country team.

Thousands of homes and businesses were devastated by the storm, which piled surging flood waters at the intersection of the Trent and Neuse Rivers and converged at the coastal beginnings of New Bern.

Some areas of town and parts of the county were flooded more than others, but Robinson said the river rose "like 30 feet in some spots."

"Depending on where you were, flood waters were in inches or in feet," he said.

The News & Observer of Raleigh, North Carolina, reported that an estimated $100 million worth of damage was issued a little over a week after Florence, and over 4,300 homes and 300 businesses were impacted in some way.

Robinson, in particular, was dealt a very difficult hand.

"I lost everything," said Robinson, who's in his 21st year coaching New Bern. "For the last several weeks, I've just been dealing with it day to day. I get this done today and another thing tomorrow. I had to tear things in my house out."

Read: Teams Getting Back To Practice After Hurricane Florence

But being back in school, and returning to practice, was ultimately a respite. Robinson has 28 kids on his roster this season.

"Now that I"m back to work and I'm here with the kids, I'm thinking, 'OK, what do I have to do now? I've shifted from emergency day-to-day to now, 'Here's the plan and we're planning for the future.'"

Monday marked the team's third practice since the storm. Many of Robinson's cross country runners essentially dropped everything and went to work in the community as the storm hit.

When Robinson returned to work, he had over 300 unread emails and many more voicemails. When everyone returned to practice, he wasn't sure who was impacted to what degree, so he just treated everyone the same.

"I didn't want to put any pressure on the kids the first day back," he said. "I was just trying to figure out what they had been through, where they were at mentally. Some athletes lost everything, so I didn't want to stress anyone out the first day. We just wanted to get back and have fun and learn again.

"This is why I do this," he continued, emphasizing the joys of practice. "I enjoy this."

But it continues to be a process toward returning back to normalcy. New Bern was at the epicenter of one of the biggest storms of 2018, and the season was directly impacted as a result.

His team hadn't raced in weeks, though his team had a meet just a few days after its reignited season.

In the meantime, he said his training would cover the basics.

"There were feelings I hadn't felt in weeks when we had that first practice and you see all those kids," Robinson said. "You go from thinking about yourself and feeling sorry and not feeling good to seeing kids who look up to you. You have to take care of them."

Whether New Bern qualifies runners for the state championships isn't the larger goal at this point, Robinson said.

"This will be an important season," he said. "Watching kids who lost everything and seeing them compete and get after it, that's what's going to be special."

New Bern had its first meet on Wednesday.